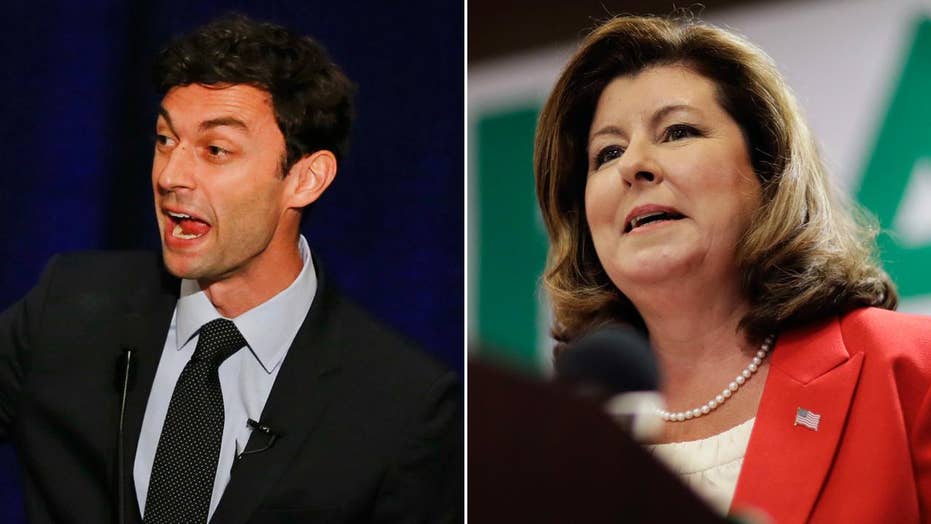 Ossoff, Handel to face off in Georgia's 6th district

Democrats are hoping to flip an open House seat this month in deep-red Georgia -- and flip the 2017 election story in which they’ve so far failed to win any Republican-held seat in this year's special elections.

The races had been billed as a potential prelude to Democrats’ grand plan to win control of the House next year -- based largely on the expectation that voters would take out their frustration with President Trump on majority Republicans in Congress.

However, Democrats have not won any of the three races this year in which a GOP House member left open his seat to join the Trump administration. They have now put their hope on first-time candidate Jon Ossoff in the June 20 runoff race for the House seat in suburban Atlanta.

“There shouldn’t even be a Democrat in that runoff,” New Mexico Rep. Ray Lujan, chairman of the Democratic Congressional Campaign Committee, said last week at the group’s Capitol Hill headquarters.

However, he also acknowledged: “It’s going to be a tight race.”

The 30-year-old Ossoff could not secure an outright victory in the initial special election in April. But he was a top-two finisher in an 18-candidate field for a seat held by Republicans for nearly four decades, which lands him in the runoff with GOP establishment candidate Karen Handel, a former Georgia secretary of state.

The latest RealClearPolitics.com averaging of polls has Ossoff up by 2 percentage points.

With a crop of wavy, dark hair and a master’s degree from the London School of Economics, Ossoff, a documentary filmmaker and former Hill staffer, has emerged as an ideal candidate for Democrats.

And though he’s running for office for the first time, Ossoff has run a relatively astute and mistake-free campaign, with the exception of living with his girlfriend outside of the district and declining to debate Handel on CNN.

“If I had lied about having national security credentials, I’d want to hide too,” the National Republican Congressional Committee said in a blog post, referring to Ossoff appearing to have inflated his role as a Hill staffer.

Ossoff touts tax cuts for small businesses, a Republican pillar, while also championing equal rights from women and minorities, which has earned him the support of civil rights icon and Georgia Democratic Rep. John Lewis.

The race has reportedly broken a spending record for House contests.

The candidates and outside groups have bought roughly $29.7 million in TV ads for the seat Republican Tom Price left open to become Health and Human Services secretary, according to Politico.

And that spending total does not include the millions being spent on digital and radio ads as well as get-out-the-vote efforts.

While Republicans have held the seat since former House Speaker Newt Gingrich took it from Democrats in 1978, the district does not appear as conservative as in year’s past.

Democrats can hardly count any Republican seat as a lock, considering GOP candidate Greg Gianforte won in Montana last month despite allegations he body-slammed a reporter the day before the election. He later apologized.

Democrats will notch a victory on Tuesday, however, with only Democratic candidates vying for the House seat in California once held by fellow party member Xavier Becerra.

Democrats also lost the special election this spring for the open House seat in Kansas of Republican Mike Pompeo, the new CIA director.