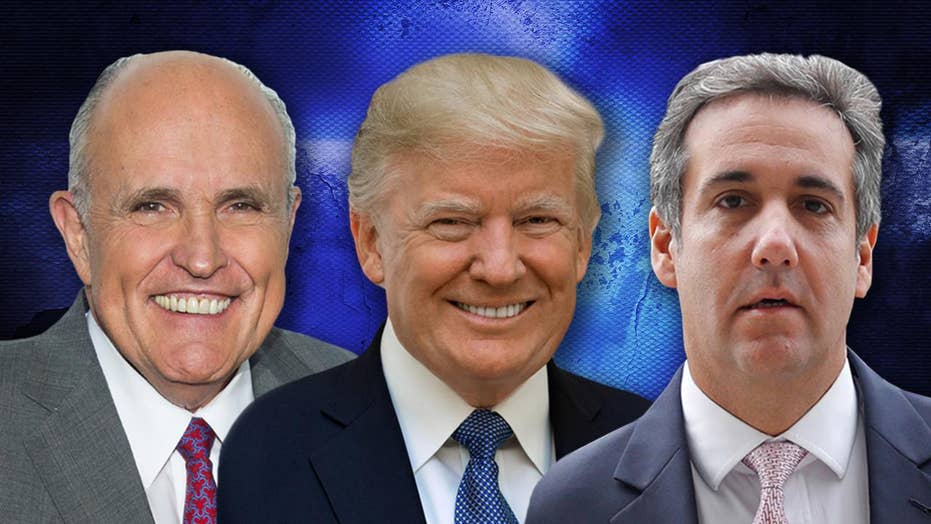 Congressional Democrats have seized on an overnight report claiming President Trump directed Michael Cohen to lie about the timing of discussions over a proposed Trump Tower project in Moscow, threatening renewed investigations and even suggesting the allegations could form the basis for impeachment proceedings.

"Any suggestion – from any source – that the President counseled Michael Cohen to lie is categorically false.  Michael Cohen is a convicted criminal and a liar," Giuliani said. "... Today’s claims are just more made-up lies born of Michael Cohen’s malice and desperation, in an effort to reduce his sentence."

The report was enough to spark immense interest from Democrats on Capitol Hill.

House Judiciary Committee Chairman Jerrold Nadler, D-N.Y., who would be at the center of any future impeachment push but so far has taken a reserved approach toward that possibility, fired a warning shot on the heels of the report on Friday morning.

“We know that the President has engaged in a long pattern of obstruction. Directing a subordinate to lie to Congress is a federal crime,” Nadler tweeted. “The @HouseJudiciary Committee’s job is to get to the bottom of it, and we will do that work.”

Nadler’s warning came after Buzzfeed reported that Trump instructed his former attorney Cohen to lie to Congress in his August 2017 deposition before the House and Senate Intelligence Committees about the now-abandoned real estate deal to build a Trump Tower in Russia.

Buzzfeed cited two unnamed federal law enforcement officials involved in an investigation on the matter who said Cohen acknowledged to Special Counsel Robert Mueller’s office that he was instructed by Trump in 2017 to lie to Congress about the Moscow negotiations. The report said Mueller’s office first learned of the directive from interviews with witnesses from the Trump Organization and internal company email, text messages and documents.

The report also said that Ivanka Trump and Donald Trump Jr. were briefed with regular details about the real estate deal from Cohen.

The report, which has not been confirmed by Fox News, was immediately dismissed by Giuliani.

“If you believe Cohen, I can get you a great deal on the Brooklyn Bridge,” Giuliani said in response to the report, while later issuing his categorical denial.

Cohen’s attorney, Lanny Davis, issued a statement to MSNBC on the BuzzFeed report, saying, “Out of respect for Mr. Mueller’s and the Office of Special Counsel’s investigation, Mr. Cohen declined to respond to the questions asked by the reporters and so do I.”

But House Democrats have seized on the report.

House Intelligence Committee Chairman Adam Schiff, D-Calif., whose committee is already investigating the president and his ties to Russia, called the allegations in the report “the most serious to date.”

“The allegation that the President of the United States may have suborned perjury before our committee in an effort to curtail the investigation and cover up his business dealings with Russia is among the most serious to date,” Schiff said in a statement. “We will do what’s necessary to find out if it’s true.”

Rep. Ted Lieu, D-Calif., said the House should begin to “establish a record” of whether Trump “committed high crimes,” repeatedly hinting on Twitter at impeachment proceedings.

“Based on the Buzzfeed report and numerous other articles showing @realDonaldTrump committed Obstruction of Justice and other possible felonies, it is time for the House Judiciary Committee to start holding hearings to establish a record of whether @POTUS committed high crimes,” Lieu tweeted.

Rep. Joaquin Castro, D-Texas, called for Trump to leave office or face impeachment if the report is accurate.

“If the @BuzzFeed story is true, President Trump must resign or be impeached.”

So far, impeachment calls have largely been limited to rank-and-file members, with House Democratic leadership generally reluctant to take them up.

House Democrats, like Reps. Brad Sherman, D-Calif., and Al Green, D-Texas, on the first day of the new Congress, introduced articles of impeachment against the president. Several House committees, meanwhile, are investigating the president and potential ties to Russia including the House Oversight Committee and now a House Foreign Affairs subcommittee that was once dedicated to terrorism, but has been redirected to investigations of Trump.

Sen. Chris Murphy, D-Conn., called for the special counsel’s office to be more forthcoming about information he has regarding the president.

“Listen, if Mueller does have multiple sources confirming Trump directed Cohen to lie to Congress, then we need to know this ASAP,” Murphy tweeted. “Mueller shouldn’t end his inquiry, but it’s time for him to show Congress his cards before it’s too late for us to act.”

The BuzzFeed report alleges for the first time that Trump directed Cohen to lie in his congressional testimony, though according to court documents and the statements Cohen made publicly, he has acknowledged that his actions were taken out of “loyalty” to the president.

In November, Cohen pleaded guilty to lying to Congress about the Trump real estate project in Russia as part of Mueller’s investigation into Russian meddling and potential collusion with Trump campaign associates in the 2016 presidential election.

“Cohen made the false statements to minimize links between the Moscow Project and Individual 1 [Trump] and give the false impression that the Moscow Project ended before the ‘Iowa caucus…the very first primary,’ in hopes of limiting the ongoing Russia investigations,” Mueller wrote in the filing.

“Cohen did recall that in or around January 2016, Cohen received a response from the office of Russian Official 1, the Press Secretary for the President of Russia, and spoke to a member of that office about the Moscow Project,” Mueller added.

Cohen entered a plea deal with the special counsel to cooperate on “any and all matters” deemed relevant. The maximum prison sentence for Cohen is five years in prison and a fine of up to $250,000.

In court in November, after entering his plea, Cohen acknowledged his work for Trump as counsel and adviser.

“I continued to follow the political messaging of Individual 1 and his advisors. I was aware that Individual 1 said he was not tied to Russia, attacks were politically motivated, and all interactions were terminated by the time of the Iowa Caucuses,” Cohen said, adding that in 2017, when he testified, he gave a “false” description of the business deal.

“I asserted all efforts ceased in January 2016 when they kept going until June 2016,” he said. “There were more extensive communications. I said I never contemplated travel or spoke to Individual 1 regarding travel, but I did.”

Cohen added: “I would like to add that I never did travel to Russia and I have never been to Moscow. I made the statement to keep up with political messaging and out of loyalty.”

Cohen is slated to appear for public testimony before the House Oversight and Government Reform Committee on Feb. 7.