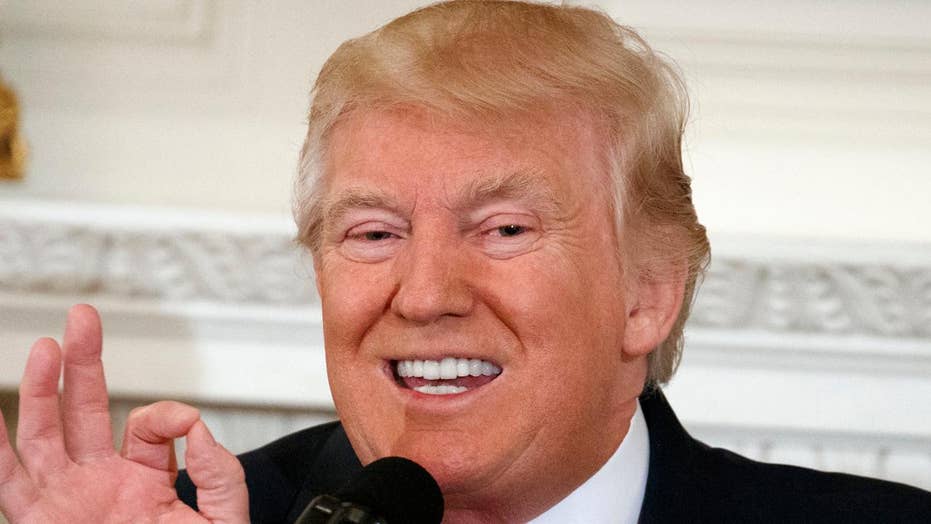 What does Trump need to say in congressional address?

Democrats might not be planning a mass boycott of President Trump's first address to Congress, as they did for his inauguration -- but that doesn't mean they'll greet the president with open arms, either.

Some of Trump's biggest critics are planning to demonstrate their opposition to the 45th president in their own way when he enters the House chamber Tuesday night.

Rep. Eliot Engel, D-N.Y., for instance, is planning to ditch his years-long tradition of standing at the edge of the aisle to shake the president's hand.

He announced Tuesday he won't shake hands with Trump.

“This isn’t part of our normal political discourse, this goes beyond ideological and political differences,” Engel said, referring to reports of the Trump administration’s ties to Russia and efforts to repeal ObamaCare. “I will listen to what he has to say today, but I will not greet him and shake his hand.”

At least one Democrat, California Rep. Maxine Waters, reportedly does plan to skip the speech.

Democrats also are turning to former Kentucky Gov. Steve Beshear to deliver the party’s official response. And another Democratic response will be delivered, in Spanish, by Astrid Silva, who was brought illegally to the U.S. as a child.

Other Democrats are making a statement of sorts with the guests they invite.

Rhode Island Rep. Jim Langevin is leading an effort to encourage members to bring guests from their districts who have been, or could be, negatively affected by Trump administration policies.

Some of those participating include Rep. Jared Polis, D-Colo., who is attending with a beneficiary of the Obama-era policy sparing illegal immigrants who came to the U.S. as children from deportation. Rep. Judy Chu, D-Calif., will attend alongside a 35-year old Iranian graduate student impacted by Trump’s executive order calling for a temporary ban on immigration from seven predominantly Muslim countries.

“Participating Democratic members are hoping that their diverse body of guests will remind President Trump that he is not the arbiter of patriotism,” a statement from Langevin’s office said. “This country belongs to people of all colors, genders, orientations, and faiths, and Democratic members of Congress will continue to stand against President Trump’s divisive actions that marginalize communities across the country.”

Members of the House Democratic Women’s Working Group, meanwhile, plan to wear white to show their “commitment to protecting women’s rights,” such as access to affordable health care, equal pay, and affordable childcare.

“We wear white to unite against any attempts by the Trump Administration to roll back the incredible progress women have made in the last century, and we will continue to support the advancement of all women,” Rep. Lois Frankel, D-Fla., group chairwoman, said in a statement. “We will not go back.”

Despite the preemptive pushback, White House officials are previewing a largely "optimistic" speech that will highlight Trump's key accomplishments to date and lay out the agenda ahead.

While House Democrats say they won’t “disruptively protest” during the president’s speech, there might be one thing Trump could do to win them over.

“If the president wants a standing ovation from the Democrats side of the aisle tonight, he’ll announce that he’ll release his taxes,” Rep. Joseph Crowley, D-N.Y., quipped.

He said Democrats would otherwise be "polite and show very little, if any, enthusiasm of what we anticipate he has to say.”