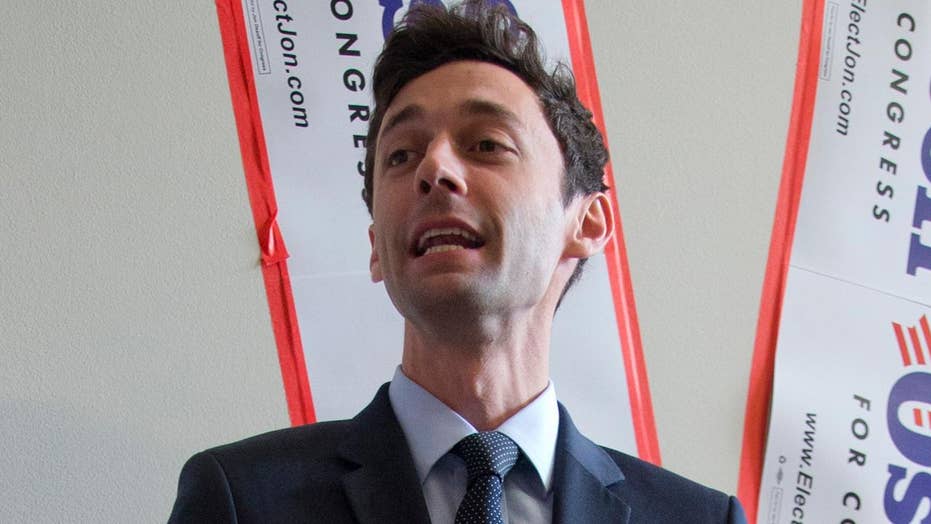 Democrats are pumping millions into the Georgia congressional election set for Tuesday, hoping a 30-year-old political upstart who's attracting star power can deliver a rebuke to President Trump and help the party reclaim lost momentum.

Hollywood has even come out for the off-cycle vote, with actor Samuel L. Jackson cutting a radio ad urging voters to flip the seat once held by Republican Tom Price, who is now Trump's health secretary.

“Vote for the Democratic Party. Stop Donald Trump, a man who encourages racial and religious discrimination and sexism,” Jackson says in the ad, casting the race as a chance to undermine the Republican president and throwing in "Pulp Fiction" references for good measure. “We have to channel the great vengeance and fury we have for this administration into votes at the ballot box.”

Democrats tried a similar tactic last week in their failed bid for the open seat of Kansas' Mike Pompeo, arguing a win in that conservative district would prove just how eager Americans are to end Trump and fellow Republicans’ control of Washington.

Washington Democrats, however, put essentially no resources into the race. By contrast, Democratic Congressional Campaign Committee staffers are on the ground in Georgia, and supporters have given top Democratic candidate Jon Ossoff  $8 million-plus, with 80 percent of the money coming from outside the state.

Republicans have held the suburban Atlanta seat for nearly four decades. However, Democrats saw an opening for an upset after Trump last year narrowly defeated Democrat Hillary Clinton in that district, while Price won with 61 percent of the vote.

Democrats also see a win as a catalyst for them in the 2018 midterm elections, though Republicans would still have a roughly 44-seat majority in the House and a four-seat advantage in the Senate.

The race Tuesday features 18 candidates -- 11 Republicans, five Democrats and two independents. To outright take the so-called “jungle primary,” the winner must get more than 50 percent of the vote. If not, the leader would face the second-place finisher in a runoff.

Ossoff is expected to get the most votes but not the majority, likely sending him and one of the Republican candidates to the June 20 runoff.

Trump and other Washington Republicans have gotten into the act -- a clear indication of their desire to keep the seat and blunt any momentum toward a possible 2018 Democratic comeback.

He also tweeted Sunday: “The recent Kansas election (Congress) was a really big media event, until the Republicans won. Now they play the same game with Georgia-BAD!”

In addition, the amount of money going to Ossoff is also a liability.

"I don't care what party you're from," said Marty Aftewicz, a 66-year-old Republican voter from Marietta. "If the money's coming from outside the district, it's dirty. … Anyone raising that much outside money can't represent me."

Republicans have also run a barrage of campaign ads trying to tie the 30-year-old Ossoff to House Minority Leader Rep. Nancy Pelosi, a California Democrat, and portray him as too sophomoric and inexperienced to govern.

"Jon is being bankrolled by the most extreme liberals,” said Karen Handel, a former secretary of state and one of Ossoff's Republican challengers. “No one is naive enough to think that he will not be beholden to those who are bankrolling him."

Ossoff, nevertheless, pledges to be an "independent voice" in Congress. And he defends his campaign as a grassroots success powered by small and medium donors.

Though he could get the most votes Tuesday, national Republicans think he would lose in June to Handel or fellow GOP candidates Bob Gray, a technology executive, or Dan Moody or Judson Hill, former state senators.

Handel vows to work with Trump on common-ground issues but says her job is to “be a voice for people of the 6th District."

Gray says he would be a "willing partner" in the effort to fulfill Trump’s legislative agenda.