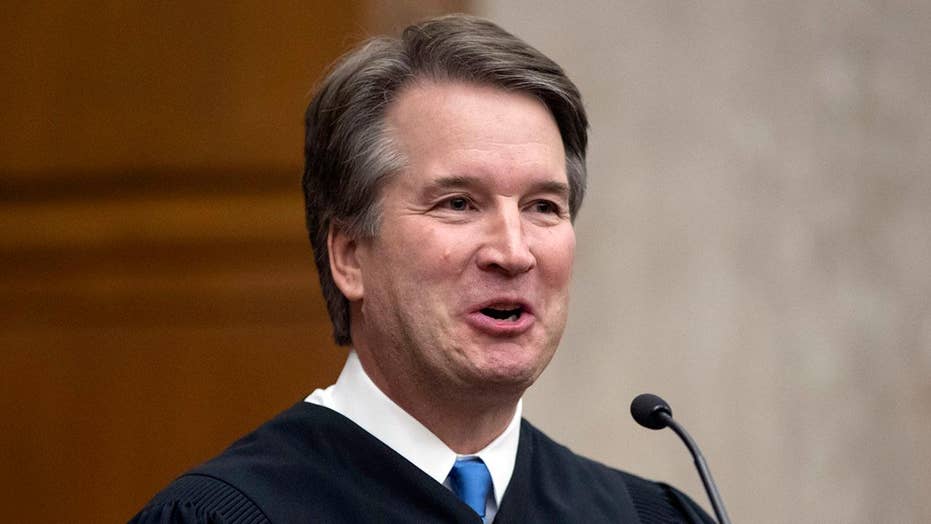 How Kavanaugh's work history could impact his confirmation

In a dozen years as a federal judge and 300-some opinions to his credit, Judge Brett Kavanaugh sees his job as calling constitutional 'balls and strikes'; Shannon Bream looks at President Trump's pick to replace Supreme Court Justice Anthony Kennedy.

Former President George W. Bush’s attorney Bill Burck told the Senate Judiciary Committee in a letter Friday that it has mostly completed its work ahead of next week’s planned confirmation hearing.

Kavanaugh, who has been tapped by President Trump to replace Anthony Kennedy on the nation’s highest court, served in the White House Counsel’s office during the Bush administration.

But the letter said that the White House and the Department of Justice, conducting its own review of the presidential records, “have identified certain documents of the type traditionally protected by constitutional privilege.”

“The White House, after consultation with the Department of Justice, has directed that we not provide these documents for this reason,” it said.

According to the letter, most of those documents withheld are about “deliberations and candid advice concerning the selection and nomination of judicial candidates, the confidentiality of which is critical to any president’s ability to carry out this core executive function.”

The rest include documents that include advice to Bush, communications among staffers about communications with Bush, and discussion of executive orders or legislation he was considering.

He said: “We’re witnessing a Friday night document massacre.  President Trump’s decision to step in at the last moment and hide 100,000 pages of Judge Kavanaugh’s records from the American public is not only unprecedented in the history of Supreme Court nominations, it has all the makings of a cover-up.”

Schumer added: “Republicans in the Senate and the president of the United States are colluding to keep Judge Kavanaugh’s records secret, and trying to hide their actions from the American people by doing it on the Friday night of a holiday weekend.  What are they trying so desperately to hide?”

Schumer’s office said it was the first time in history a president has used executive privilege to block the release of presidential records to the Senate during a Supreme Court nomination. It also claimed that the Senate has received only 6 percent (415,000 pages) of Kavanaugh’s White House records.

The office of Senate Judiciary Committee Chairman Chuck Grassley, R-Iowa, said in a statement that the lawmaker “has expanded access to confidential material beyond that for any other Supreme Court nominee.”

“Grassley also offered to help facilitate the public release of specific confidential records that members wish to discuss during the open session of the confirmation hearing,” his office said. “Only one senator has taken him up on this offer, and the requested documents have since been publicly released at Grassley’s request.”

In terms of quantity, Grassley’s office said it has provided significantly more documents of executive branch material than was the case with past nominees. It said that 440,500 documents were produced in relation to Kavanaugh, compared with 182,000 for Justice Neil Gorsuch, 173,000 for Justice Elena Kagan and just 6,350 for Justice Sonia Sotomayor.