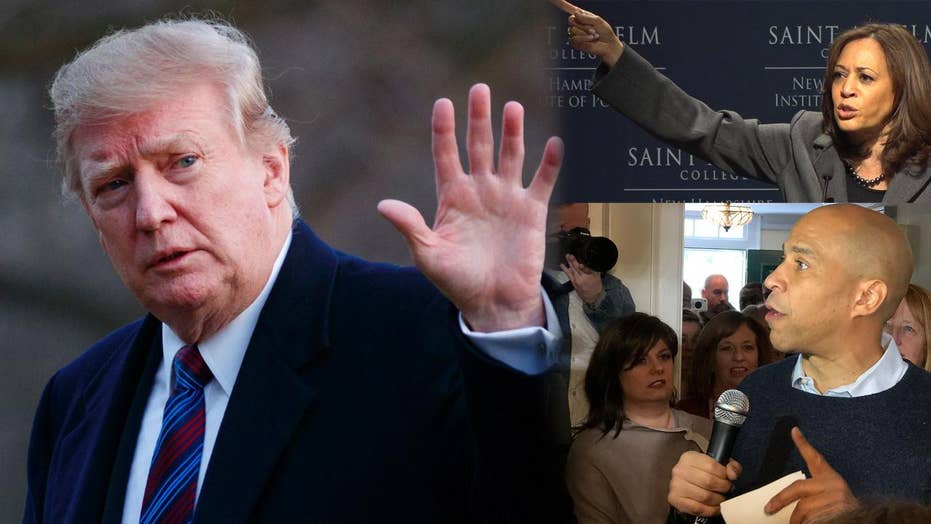 Democrats have criticized President Trump for his declaration of a national emergency at the southern border, but some say he is setting a precedent that would allow future Democratic administrations to declare national emergencies to advance left-leaning policies.

Last week, presidential hopefuls Sen. Elizabeth Warren, D-Mass., and Indiana Mayor Pete Buttigieg both tweeted that climate change is an emergency while border wall construction is not, although they stopped short of saying that they'd declare a national emergency if elected. Sen. Warren also charged that gun violence and the nation's opioid epidemic should also be considered emergencies.

Trump's declaration is facing a slew of legal challenges and backlash in Congress. Most Democratic presidential contenders are distancing themselves from the idea and condemning the president.

"Republicans wouldn’t have tolerated this if Obama did it," Sen. Cory Booker, D-NJ, told Fox News at a campaign event in Portsmouth, New Hampshire. "And they shouldn’t tolerate it when Donald Trump is doing it."

“This is a crisis of his own making because it was a campaign pledge that took heat and propelled him to victory," Sen. Harris told the audience. "He feels the need to keep reciting what is a lie.”

A recent Fox News poll found that 63 percent of voters consider climate change an emergency, the same number of those who think that about border security. Meanwhile, opioid addiction dwarfs that: 87 percent consider it an emergency or major problem.

Neil Levesque, the executive director of the New Hampshire Institute of Politics, said Democrats could seize on the precedent, especially if it holds up in court.

“The next president, if it is a Democrat, could use this to their advantage and politicize certain national emergencies as well, specifically on things like gun control or climate changes," Levesque said. "That could be a real worry to conservative voters.”

Democratic voters, however, are mixed on the idea of making a national emergency declaration a campaign promise.

"I am a bit wary of granting that much power to one individual," said Devon Kristen at a Booker campaign event. "Because in the current hands, I think it's in the hands of the wrong individual."

"I would feel extremely positive," said Sydney Paluch, a Dartmouth College student attending a recent town hall event for Sen. Kirsten Gillibrand, "Considering surprising that those are real, statistical documented issues. Not a manufactured one."

That same Fox News poll also found that 56 percent of Americans oppose the president's declaration, while 38 percent support it.