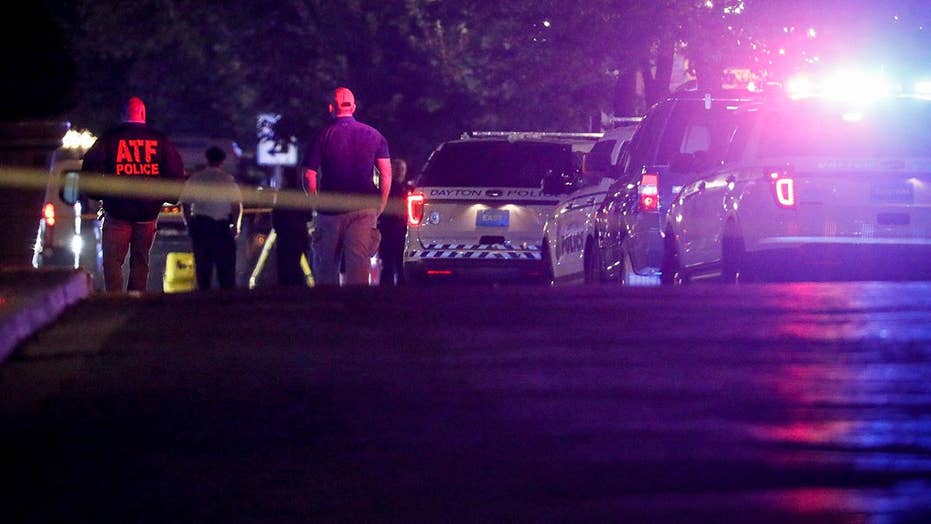 How will police be investigating both the El Paso and Dayton shootings?

The Democratic National Committee is fundraising off the weekend's tragic mass shootings in El Paso, Texas, and Dayton, Ohio, seeking donations for the fight to "prevent gun violence and save lives."

The DNC sent an email to supporters on Monday, signed by former Rep. Gabby Giffords, encouraging donors to “split” a donation of $10 to $200 between the DNC and Giffords’ PAC.

“Friend,” the email begins, “... We can’t afford to wait another day, or for another massacre to happen in our country, for lawmakers to address this. Yet the defenders of the status quo—the gun manufacturing lobby and every single politician who is paid to defend it—will tell you that horrific acts of violence are beyond our control.”

The Democratic National Committee sent out a fundraising email in the wake of the mass shootings in Texas and Ohio over the weekend.

Giffords added: “I am telling you today this could not be further from the truth.”

“…If Congress—specifically Mitch McConnell and Republicans in the United States Senate—fail to take action, then we must act to replace them. Because until we act, shootings like these threaten to take even more lives and tear apart even more communities.”

Giffords, D-Ariz., survived an assassination attempt in 2011 outside a Tucson, Ariz., supermarket where she was meeting with her constituents. Giffords suffered significant brain injuries. Since recovering, Giffords has become one of the country’s most outspoken gun-control advocates and launched “Giffords PAC,” which is focused on preventing gun violence.

Asked about the email, DNC Communications Director Xochitl Hinojosa said: "Our goal is to end gun violence once and for all. The way to do that is by helping organizations like the Giffords PAC and by electing Democrats up and down the ticket who will work day in and day out to pass the reforms we need to protect our families and our children. That's the only way to ensure change."

Her email, however, was geared more toward raising money for other gun violence prevention groups, including Giffords' organization. “No more thoughts and prayers. We need action,” Harris’ email said. “If you’re with me, split a contribution to Giffords, the Brady Campaign to Prevent Gun Violence, and Moms Demand Action for Gun Sense in America.”

Conservative outlets and pundits criticized Harris' email, but her campaign spokesman hit back.

"This is disgusting. The rightwing disinformation machine is in full Attack Kamala mode. She is fundraising FOR GUN VIOLENCE PREVENTION GROUPS. Damn straight she is going to help fund the fight against gun violence in the wake of these horrific mass shootings," Harris spokesman Ian Sams tweeted.

The emails come as Democrats have sharply criticized President Trump’s response to the mass shootings.

Trump, on Monday morning, addressed the nation from the White House calling for reforms in mental health laws and the passage of so-called “red flag laws” to take guns from those deemed a public risk. Trump also unequivocally denounced white supremacy, responding to reports that the shooter in El Paso wrote a racist manifesto.

“In one voice, our nation must condemn racism, bigotry and white supremacy,” Trump said Monday. “These sinister ideologies must be defeated. Hatred has no place in America.”

The president did not call for explicit changes to gun laws beyond red flag laws, despite tweeting earlier Monday morning about the possibility of linking background check legislation to immigration reform. However, he said he is open and ready to listen to ideas "that will actually work."

Among his list of proposals, Trump called for changes to mental health laws "to better identify mentally disturbed individuals who may commit acts of violence," adding that we must "make sure those people not only get treatment but when necessary, involuntary confinement."

But Democrats blasted the president for focusing more on mental health and violent video games than guns, and bristled at his statement that, “Mental illness and hatred pulls the trigger, not the gun."

The shootings, coming in quick succession over the weekend, shocked a nation that has seen a concentration of mass shootings over the past two decades unparalleled in the western world.

In Dayton, Ohio, 24-year-old Connor Betts opened fire outside a bar around 1 a.m. Sunday, killing his adult sister and eight others. Police say he was fatally shot by officers within 30 seconds, and was wearing a mask, bulletproof vest and earplugs and had at least 100 rounds. He injured more than two-dozen people.