“I would legalize marijuana and then I would pardon everyone who’s in jail for a nonviolent, drug-related offense,” Yang said while discussing criminal justice reform at the Rev. Al Sharpton's National Action Network convention in New York City.

“I would pardon them all on April 20, 2021, and I would high-five them on the way out of jail,” Yang said, referring to “4/20,” a holiday celebrated by marijuana enthusiasts. 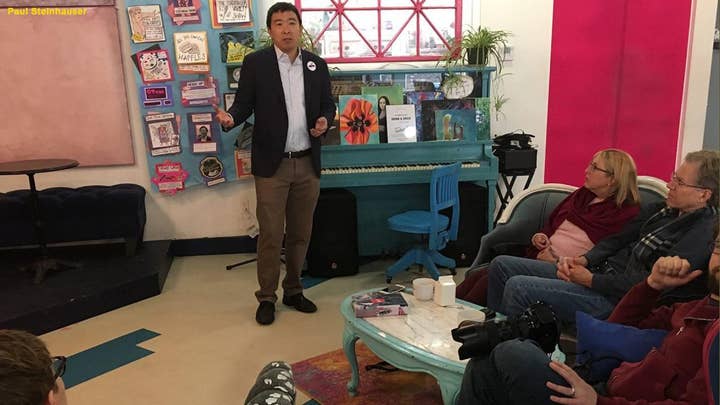 The progressive New York entrepreneur also said he would end private prisons and use federal funds to purchase body cameras for every police officer, according to Marijuana Moment, a cannabis news site that first reported Yang’s comments.

Yang, 44, was one of a handful of Democratic presidential candidates to attend the convention Wednesday. Others included Sens. Cory Booker of New Jersey, Kamala Harris of California and Elizabeth Warren of Massachusetts. More Democrats are expected to speak at the event Thursday and Friday.

Booker has introduced a bill backed by several presidential hopefuls that would end the federal government’s prohibition of marijuana and expunge certain marijuana-related criminal records.

In the first quarter of 2019, Yang's campaign has raised $1.7 million, the Washington Times reported. He has pushed for a universal basic income and given away some of his own money to families in Iowa and New Hampshire, the first states in the presidential caucus and primary calendar.