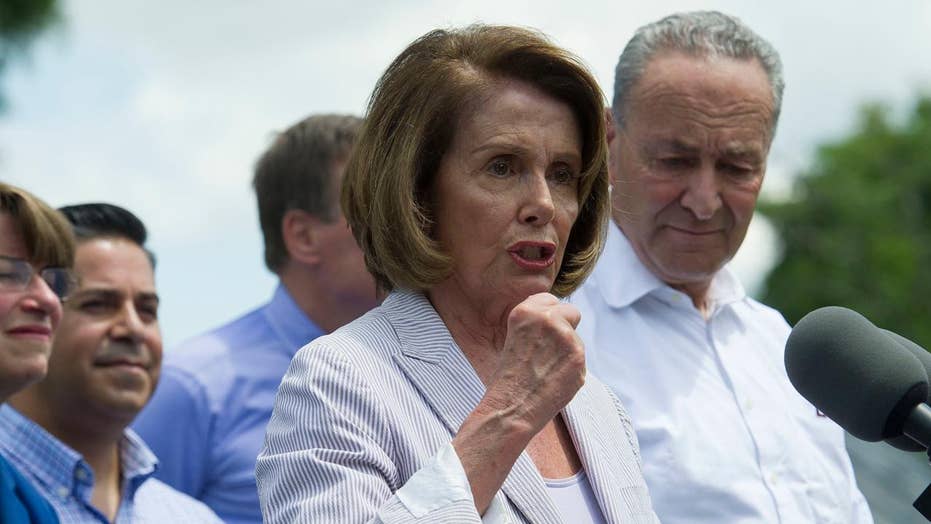 Are Dems offering a 'better' deal or the same, old deal?

Democrats are entering the 2018 congressional races in record numbers, largely motivated by the Trump “resistance” movement they hope will extend into next year.

An analysis of the Federal Election Commission’s six-month report for midterm candidates shows 209 Democratic challengers with at least $5,000 raised -- by far the biggest batch of challengers for any year dating back to 2003, according to statistics kept by the Campaign Finance Institute.

The July 15 FEC summary also shows 105 of 241 House Republican incumbents so far have a Democratic challenger with such a war chest.

Out-of-power Democrats have crowed for months about the prospect of voter dissatisfaction with President Trump and congressional Republicans spawning a 2018 wave election in their favor.

“I think a lot of it is inspiration meets opportunity,” Mac Zilber, a California-based Democratic political consultant, said of the large Democratic field.

“It’s Donald Trump first and foremost. But they’re also being driven by a lot of donors and activists out there. And frankly, some people were a little more complacent under Obama. They’re finally taking that step.”

New York Democratic Rep. Joe Crowley recently said the Democratic Congressional Campaign Committee has more than 350 candidates lined up for next year’s races, in which his party would need to win 24 more House seats to take control of the chamber.

“No district is off the table,” said DCCC Chairman Rep. Ben Ray Lujan.

To be sure, historical trends for the party that doesn’t control the White House suggest an opportunity for Democrats to make big gains in next year’s midterms. Beyond Trump’s record-low approval rating, pulled down by the Russia meddling-collusion probes, Capitol Hill Republicans continue to struggle to pass an ObamaCare overhaul bill as promised during the 2016 campaign.

The party still appears split between establishment voters like those who voted for Hillary Clinton in last year’s presidential race and the progressive wing that backed democratic socialist Sen. Bernie Sanders. In addition, Republicans continue to out-fundraise Democrats. And Democrats’ massive candidate field raises questions about whether the party’s political infrastructure might be over-extended – and whether overcrowded primary races could leave the winners bruised going into November 2018.

The anti-Trump campaign platform also has failed so far to help Democrats pick off Republican-held seats in four special House elections this year.

Eyeing a reset, Washington Democrats on Monday officially rebranded their party and message -- promising “a better deal” for voters with better-paying jobs and other economic opportunities.

“They don’t have a message, and that became clear this week when they took tips from Papa John’s,” said Jesse Hunt, press secretary for the National Republican Congressional Committee, referring to criticism that the “better deal” slogan mimics that of the pizza chain.

Zilber, a partner in J&Z Strategies, downplayed the notion that Democratic candidates will uniformly attack Trump.

“One of the great things about primaries is that they are natural experiments to see which message wins out,” he said.

Zilber also argued that different messages will appeal to different voters, including those in Orange County, Calif., a historically conservative area with an increasingly diversified population that in 2016 voted for Clinton, marking the first time they picked a Democrat.

Hunt argued Wednesday that Democrats’ preferred candidate to deny Comstock a second term is Jennifer Wexton, who trails three other Democrats in the race in fundraising and who had her picture taken with House Minority Leader Nancy Pelosi, D-Calif., when Democrats announced their “better deal” plan in Comstock’s district.

Michael Malbin, of the Washington-based Campaign Finance Institute and who analyzed the FEC data, says Democrats are putting themselves in a strong position to take advantage of a wave, if there is one.

“But winning the first inning is not the same as winning the ninth," he recently wrote in a blog for the nonpartisan Brookings Institution.

The average cost of winning a 2016 House race was $1.3 million, according to OpenSecrets.org.