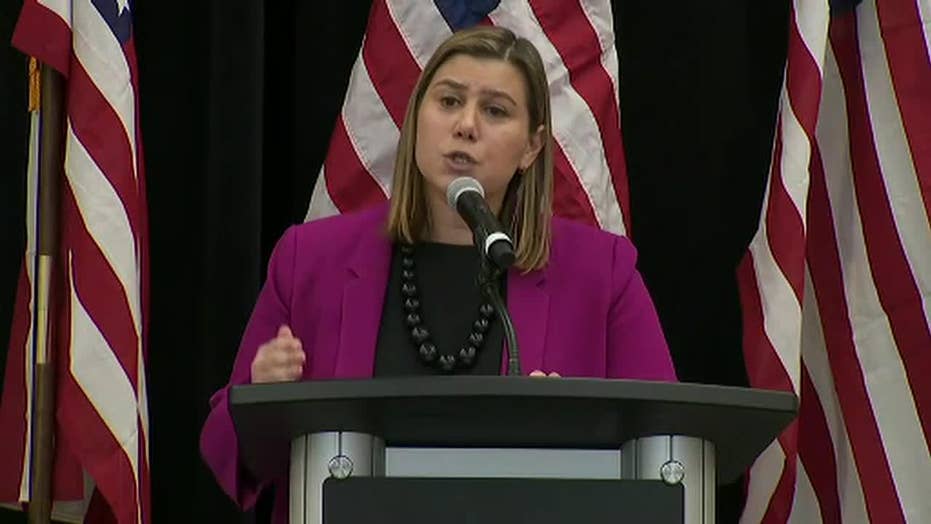 Democrat Rep. Elissa Slotkin faced a rowdy audience at a Michigan community meeting, as she explained her decision to support the impeachment of President Trump

Rep. Elissa Slotkin, D-Mich., faced a rowdy audience at a community meeting Monday, as she explained her newly announced decision to support the impeachment of President Trump.

Slotkin’s district supported Trump in 2016, so she was prepared for the mixed reception at Monday’s event. Indeed, the event kicked off with a battery of jeers and outbursts from the crowd as she spoke about why she went from being against impeachment after the Russia investigation to in favor of it now.

“I’m glad to see so much enthusiasm for civic engagement,” she said when her introduction was met with a chorus of boos from an apparently pro-Trump segment of the audience.

“I knew from the very beginning that this was going to be a controversial decision,” Slotkin said later on, moving to the subject of impeachment after beginning with other legislative matters. In the midst of the jeering, she declared, “I’m just gonna continue, ‘cause I got the mic.”

Slotkin addressed the allegations that Trump improperly withheld military aid from Ukraine while trying to pressure the country into helping with investigations of Democrats -- namely, former Vice President Joe Biden's role ousting a Ukrainian prosecutor who had been looking into the energy company where his son Hunter served on the board.

The congresswoman explained that she worked on the National Security Council under Presidents George W. Bush and Barack Obama, and that while “presidents regularly wield their power,” Trump’s actions were different because she believes he acted “for his own political gain,” not the national interest.

ON CUSP OF IMPEACHMENT, TRUMP ENDS YEAR WITH SPREE OF ACCOMPLISHMENTS

Slotkin also noted that when members of her party suggested impeaching the president prior to the Ukraine allegations, she believed that it was best left for voters to determine Trump’s fate in 2020. She explained that she feels differently now because the current controversy is itself connected to the upcoming election.

“I want people to think about where we will be if it becomes normal,” she warned.

When an audience-submitted question asked why it is a problem for the president to investigate possible corruption before handing over tax dollars to another country, Slotkin said that normally when an American is suspected of breaking the law, “we go to American law enforcement, American authorities.” She said Trump could have done just that.

“The president is the head of the executive branch, he could easily go to the FBI,” she said, and quickly addressed the implication of having Ukraine get involved instead.

“I’m sorry and deeply concerned that there are people who feel like they can trust the Ukrainians more than they trust the FBI,” she said. This statement came one week after Justice Department Inspector General Michael Horowitz released a report detailing the FBI’s missteps in conducting surveillance during the Russia investigation.

Meanwhile, Slotkin insisted Monday that her position is sincere, even if out of step with some of her constituents.

“All I can ask from the people who are listening is that while we may not agree, I hope you believe me when I tell you I made this decision out of principle,” she said, adding, “I will stick to that regardless of what it does to me politically because this is bigger than politics.”