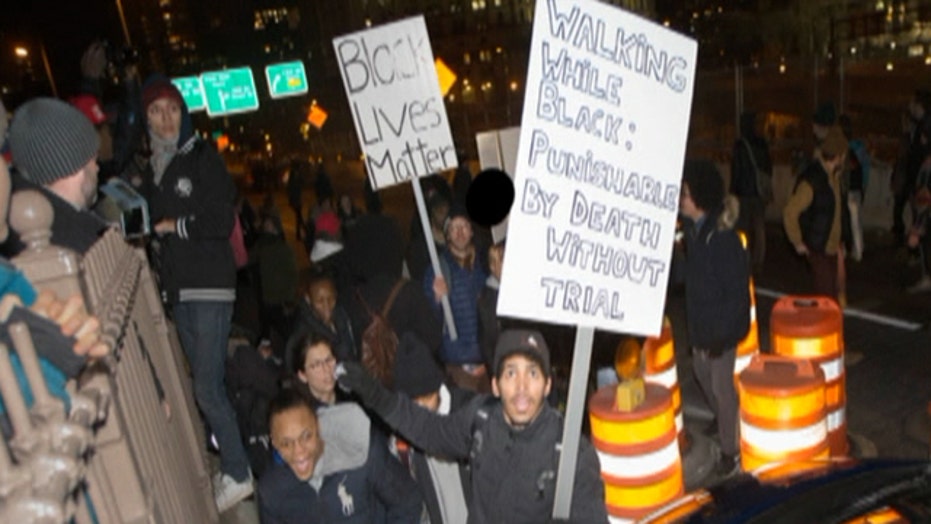 Democratic officials and presidential candidates are running into a hostile reception as they try to reach out to Black Lives Matter, a movement that has become a political minefield for the party.

On the other side of the aisle, Republicans have largely shunned the group. South Carolina Gov. Nikki Haley said this week that "black lives do matter," but they've been "disgracefully jeopardized by the movement that has laid waste to Ferguson and Baltimore."

By contrast, the Democratic National Committee passed a resolution last Friday implicitly endorsing the cause.

"Therefore it be resolved that the DNC joins with Americans across the country in affirming 'Black lives matter' and the 'say her name' efforts to make visible the pain of our fellow and sister Americans as they condemn extrajudicial killings of unarmed African American men, women and children," the resolution reads, according to Buzzfeed.

However, the Black Lives Matter group released a statement on Facebook Sunday rejecting the Democrats’ advances.

The response was the latest example of a rocky relationship between the party and the movement, which started with the George Zimmerman verdict in 2013 and significantly expanded after the 2014 death of Michael Brown.

As the movement has built itself into an effective, albeit fringe, grassroots force -- comparable in some ways to Occupy Wall Street -- Democrats have sought to bring them on board, or at least make peace.

But it has not been an easy ride.

Black Lives Matter activists stormed the stage in July while former Maryland Gov. Martin O’Malley was speaking at a Netroots Nation conference in Phoenix, Ariz. After O'Malley listened to them talk for several minutes, he agreed to calls from the audience to a civilian review board and said he would roll out a criminal reform package. Receiving applause, he then said “Black lives matter, white lives matter, all lives matter.” The crowd erupted in boos at O'Malley's statement and O’Malley later apologized for saying “all lives matter.”

In August, Democratic presidential candidate Sen. Bernie Sanders had the microphone snatched away from him by Black Lives Matter activists during a speech in Seattle. Sanders was forced to take his message to the crowd. Since then, Sanders has been trying to cater his message. On CNN's "State of the Union" on Sunday, he said, “it is not acceptable in this country when unarmed black people get dragged out of cars or get shot. That is happening too often.”

Democratic frontrunner Hillary Clinton has also crossed paths with the activists. She met privately with activists in Keene, N.H., on Aug. 11., but the meeting turned into a tense confrontation -- and was filmed and uploaded to the Internet.

“If you don’t tell black people what we need to do, then we won’t tell you all what you need to do,” one of the activists said.

“Respectfully, if that is your position, then I will only talk to white people about how we are going to deal with a very real problem,” Clinton said, to which one of the activists accused her of “victim-blaming.”

Democrats are hopeful the outreach will mark a step forward in a budding relationship with the movement.

“I do believe they will find out that it is better to have those sessions with candidates in dialogue than it is to disrupt the speeches and other public forums that heretofore have been interrupted,” David Mercer, former deputy national finance director of the Democratic National Committee, told Fox News.

However, Republicans have taken aim at Democrats for encouraging what they see as aggressive, unhelpful rhetoric.

“They take over events, they don’t have events, and Democrats cower to them,” Brad Blakeman, former deputy assistant to former President George W. Bush, said.

Mercer rejected the idea that Democrats are cowering. “In fact, Hillary Clinton has sat down with leadership of Black Lives Matter which I don’t think has happened yet with Republican candidates,” he said.

Another challenge for the Democrats is the controversial ties and statements of some of the group's members.

Alicia Garza – the movement’s co-founder – in a manifesto-type article entitled “A Herstory of #BlackLivesMatter," calls for the movement to “rebuild” the Black liberation movement from the 1960s and 70s.

Garza goes on to cite cop-killer Assata Shakur -- also known as Joanne Chesimard -- as a key inspiration for the movement. “When I use Assata’s powerful demand in my organizing work, I always begin by sharing where it comes from, sharing about Assata’s significance to the Black Liberation Movement, what it’s political purpose and message is, and why it’s important in our context,” Garza writes.

Shakur, a former member of the Black Panthers, was convicted in the 1970’s of the murder of a New Jersey police officer, before escaping prison and fleeing to Cuba. The FBI has placed her on the FBI’s Most Wanted Terrorist List.

Last Thursday, a rollout of the D.C. mayor’s anti-crime policies was repeatedly booed and interrupted by a BLM protest, led by organizer Eugene Puryear. Puryear is a self-described revolutionary and ran as part of the 2008 ticket for the Party for Socialism and Liberation – a revolutionary Marxist party.

Requests for comment to Puryear and other Black Lives Matter leaders were not returned.

“This is a militant organization that wants to use this election cycle to be disruptive. It’s wrong and the more Democrats cower to them, the worse it gets,” Blakeman said.