Democrat senators call on Judiciary Committee Chair Sen. Grassley to delay the Supreme Court nomination hearing to give them more time to review documents on the nominee's service.

The hearing descended into chaos within seconds as Democrats lined up to object to what they call a failure in the production of documents related to Kavanaugh’s service in the Bush White House.

Two of the most vocal Democratic members of the Senate Judiciary Committee were Sens. Kamala Harris, D-Calif., and Cory Booker, D-N.J. -- both potential 2020 Democratic presidential candidates.

“I appeal to your sense of fairness and decency, your commitments that you’ve made to transparency, this violates what you have even said and called for, sir,” Booker told Chairman Chuck Grassley, R-Iowa.

The repeated interruptions coincided with regular protests by left-wing group Code Pink and other protesters, who cheered the objections by Democrats and were dragged out of the hearing in the dozens. 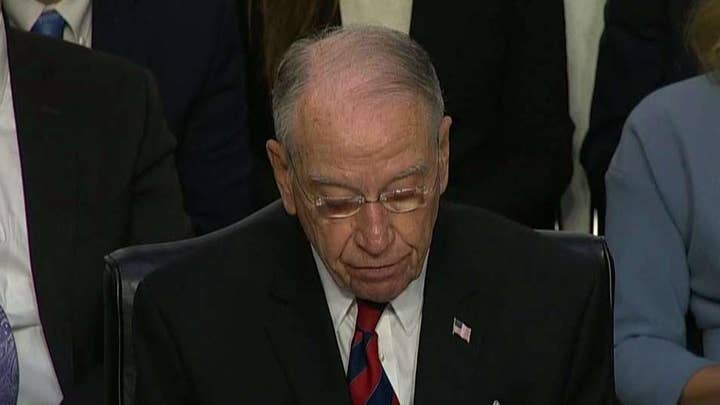 Motions by Harris and Sen. Richard Blumenthal, D-Conn., to adjourn and postpone were repeatedly brought up by Democrats, even as Grassley swatted down the requests as out of order.

Grassley said at the outset that he wanted to let those speak who had something to say. But as the objections dragged on, he expressed frustration at the repeated requests for time by Democrats.

“Can I ask my colleagues on the other side of the aisle how long you want to go on with this because I’m not going to entertain any of the motions you’re making, we’re not in executive session and I think we ought to level with the American people -- do you want this to go on all day?” he asked.

Eventually, Grassley delivered his opening statement, followed by others -- but the protests from the public gallery continued by the minute.