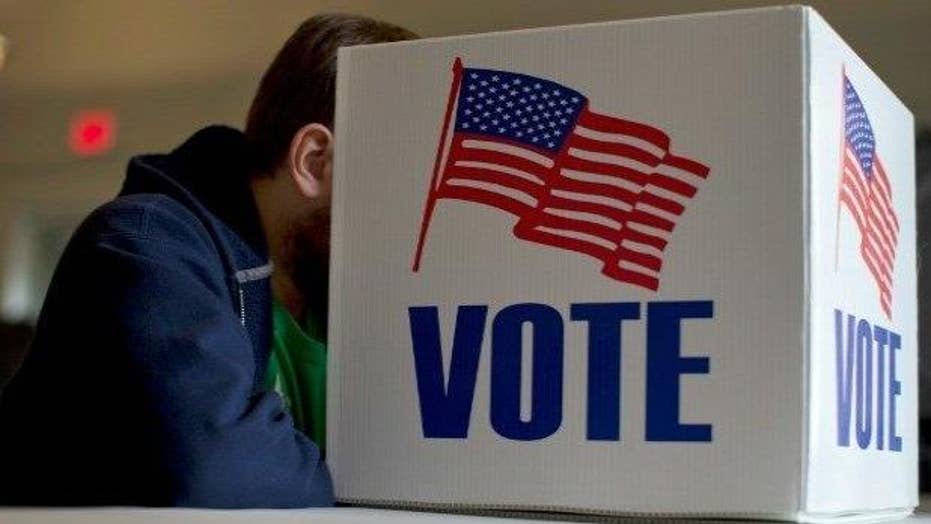 What Republicans have going for them heading into midterms

As the Democrats shift to the left on a number of issues from health care to immigration, they’ve already gone all in on one of the most contentious issues around -- gun control

A study by The Wall Street Journal found that of the 63 candidates on the House Democrats’ campaign arm’s list of seats to flip in November, 62 support expanded background checks for gun purchases.

While Dems have long pushed for gun control, there was a time when some candidates ignored the issue, included gun rights as part of their platform or even allied with the National Rifle Association. But support for gun control among candidates has hardened in recent years after a rash of high-profile mass shootings including at schools -- most recently in Parkland, Florida in February and Santa Fe, Texas in May.

That shift is being reflected in activity on the campaign trail, with more Democrats being more vocal on gun control and their advocacy of proposals such as background checks.

There has been a spike in spending on ads by Democrats that focus on gun control across gubernatorial, Senate and House races, according to USA Today. In 2014, there were 558 pro-gun control spots, mostly from Democrats. In 2018, that number had rocketed to 18,416, in comparison to 8,897 anti-gun control spots by mostly Republicans.

In the House races, pro-gun control ads represented about 67 percent of those with explicit messages on guns, compared to just six percent in 2014.

DEMOCRATS TEST-DRIVE NEW MIDTERM SLOGAN AFTER FIRST ONE IS MOCKED

That has in turn led to some significant about-faces on the issue from long-time lawmakers. The Journal points to Rep. Ann Kirkpatrick, D-Ariz. In a 2010 ad, she bragged about her “A” rating from the NRA, but last month she said she would ban “assault weapons” and was given an “F’ by the pro-gun rights group. She said her position changed after the shooting of former Arizona Rep. Gabrielle Giffords in 2011.

But while the move may rally the Democratic Party base, it may also give the Republican base a boost -- which has repeatedly shown itself more motivated on Second Amendment issues.

The National Republican Congressional Committee suggested that the move was the latest example of the Democratic Party catering to its left-wing base rather than everyday Americans.

“Republican members and candidates are focused on the issues that are important to their respective districts and Democrats are more concerned about appealing to the most radical elements of their party,” an NRCC spokesperson told Fox News.

Gun control is always risky politically for Democrats, who are wary of the political lesson learned from the 90s.

In September 1994 the Democratic-controlled Congress passed an assault weapons ban, which was subsequently signed into law by President Bill Clinton.

Less than two months later the Republicans led by Rep. Newt Gingrich, R-Ga., took control of both the House and the Senate in what was dubbed the “Revolution of 94.”

But Democrats say that their shift represents the changing mood of the nation after a spate of devastating shootings in recent years.

“2018 could be the first year in which intensity on our side of the issue exceeds intensity on the other side,” Sen. Chris Murphy, D-Conn., told The Journal.

Democrats are likely to be buoyed by the victory of Rep. Conor Lamb, D-Pa., in a March special election -- who won campaigning for background checks in a district Trump won in 2016.

Additionally a WSJ/NBC poll found that Democratic voters rated gun control the second-most important issues after healthcare. For Republicans, guns were fifth. In midterms, where the party which motivates its base can decide who takes control of the chambers in Congress, tapping into those issues could be key.

But it also represents a broader trend in the party of allowing less diversity on certain litmus issues. Last year DNC Chair Tom Perez said that being pro-choice on the subject of abortion was “non-negotiable.”

"Every Democrat, like every American, should support a woman’s right to make her own choices about her body and her health. That is not negotiable and should not change city by city or state by state,” he said.