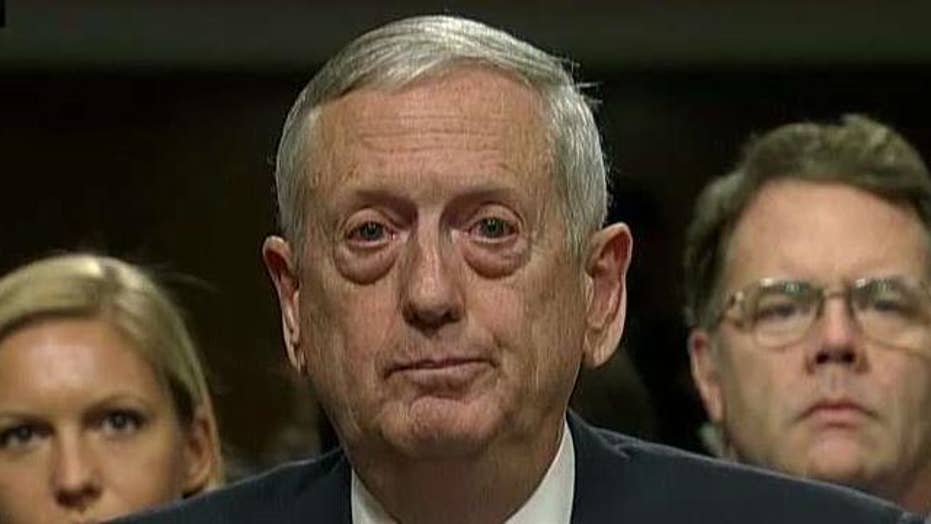 Mattis: Our armed forces must remain the best in the world

Defense secretary nominee Gen. James Mattis issued a grave warning Thursday at his Senate confirmation hearing, saying the established world order is under its “biggest attack” since World War II as he called for boosting military readiness and America’s alliances.

Under questioning from Senate Armed Services Committee Chairman John McCain, R-Ariz., about Russia and other threats, Mattis said the U.S. should “recognize the reality” of dealing with Vladimir Putin’s government and that he’s trying to “break” the North Atlantic alliance.

Citing Russia’s aggressions and other concerns, he said: “I think [the world order is] under the biggest attack since World War II … from Russia, from terrorist groups and with what China is doing in the South China Sea.”

To address this, Mattis testified, “deterrence is critical.”

His assessment came as he called for strengthening “military readiness” while also pursuing “business reforms” at the Pentagon. He said U.S. forces must be the “best led, best equipped and most lethal in the world.”

“If you confirm me, my watchwords will be solvency and security in providing for the protection of our people and the survival of our freedoms,” he said.

Mattis, a tough Marine general who earned the nickname “Mad Dog” over the course of his career and most recently led U.S. Central Command before retiring in 2013, is poised to become the first career military officer in charge of the Pentagon since the 1950s.

He addressed any potential concerns about that break from tradition at his hearing Thursday, saying he recognizes civilian control of the military is a “fundamental tenet of the American military tradition.”

“Civilian leaders bear these responsibilities because the esprit-de-corps of our military, its can-do spirit, and its obedience to civilian leadership reduces the inclination and power of the military to oppose a policy … it is ultimately ordered to implement,” he said.

Before Mattis can join the Cabinet, Congress must approve a one-time exception to a law requiring a military officer to be out of uniform for at least seven years before leading the Pentagon. Even some of Trump's strongest critics say Mattis merits the exception -- and the Senate voted decisively Thursday to approve the waiver on a 81-17 vote. It goes next to the House.

The question of budget restraints at the Pentagon is a critical one for lawmakers on both sides of the aisle. McCain warned at Thursday’s hearing that the military can’t proceed with “business as usual” as he ripped “arbitrary” congressional caps on spending.

Mattis agreed that those policies cause concerns. His assurances on dealing with Russia also follow concerns from McCain and other senior lawmakers that the incoming Donald Trump administration is wrongly warming to Moscow.

Mattis’ testimony falls amid a packed week of confirmation hearings for top Trump Cabinet nominees, including Sen. Jeff Sessions for attorney general and Rex Tillerson for secretary of state. Both nominees have faced pushback on Capitol Hill, but virtually all of Trump’s picks – Mattis included – are expected to win confirmation provided Republicans hold together on the final vote.

In prepared remarks for the hearing, Mattis expressed unqualified support for traditional U.S. international alliances. In contrast, during the White House campaign, Trump insisted that U.S. treaty allies and security partners pay more for their own defense and for hosting American forces on their soil.

Mattis is a former leader of NATO's transformation command, in charge of efforts to adapt the alliance's structure and capabilities to 21st century threats.

In his testimony, he spoke about the importance of the alliance, calling for the U.S. to maintain "the strongest possible relationship with NATO."

On the Iran nuclear deal, Mattis said he would not have personally signed the pact, but said that when America gives its word, we have to "live up to it."

Mattis also was challenged by Sen. Kirsten Gillibrand, D-N.Y., on his views on allowing homosexuals and women to serve in combat roles:

"Do you believe that openly serving homosexuals along with women in combat units is underminding our force?" she asked.

“Senator, my belief is that we have to stay focused on a military that’s so lethal that on the battlefield it will be the enemy's longest day and their worst day when they run into that force," Mattis responded, before saying he had no intention to roll back current policy. "I believe military service is a touchstone of patriots of whatever stripe."

Eliot A. Cohen, a senior State Department counselor in President George W. Bush's administration who has publicly criticized the incoming Trump team, said at a Senate hearing Tuesday that he feels a "sense of alarm" about the judgment of the incoming administration. But, he said, Mattis "would be a stabilizing and moderating force, preventing wildly stupid, dangerous or illegal things from happening."

Mattis, 66, is one of three recently retired senior generals selected by Trump for top jobs in his administration.

After retiring, Mattis joined the Hoover Institution, a conservative-leaning think tank. He also is a member of the board of directors of General Dynamics, the big defense contractor.

He has remained outspoken in his concerns about Iran. In remarks last April at the Center for Strategic and International Studies, Mattis called Iran "the single most enduring threat to stability and peace in the Middle East."

Mattis is best known as a battle-hardened combat officer who served in Afghanistan and Iraq. But he also has worked behind the scenes with senior civilian officials at the Pentagon.