Will Sanders get another debate with Clinton? DNC responds

The D.C. Council is scrambling to hold an emergency vote as early as Tuesday on legislation that would add Vermont Sen. Bernie Sanders to the district’s primary ballot after an administrative error, which led to a missed deadline, left him off the official paperwork.

The D.C. Board of Elections determined it cannot certify Sanders for the June 14 primary ballot because the local Democratic Party submitted his name after the legally binding deadline passed.

Instead, D.C. Council Member-at-Large Anita Bonds, who also chairs the D.C. Democratic Party, is preparing emergency legislation that would clear up the administrative error.

News of the legislation, first reported by NBC4, will likely be brought up for a vote Tuesday.

Sanders spokesman Michael Briggs said in a statement that the campaign “did what the D.C. law requires in order to get Bernie on the ballot and we are confident he will be on the ballot.”

John Podesta, Clinton’s campaign chairman, tweeted in support of Sanders, saying that “an administrative error should not keep a candidate off the ballot.”

Clinton and Sanders each submitted $2,500 in registration fees last month in advance of the June primary. The problem is that D.C. Democrats emailed the registration information to the D.C. Board of Elections one day after the March 16 deadline.

A voter filed a complaint against Sanders for missing the deadline. No complaint was filed against Clinton.

The D.C. ballot debacle comes during a hard-fought race between Sanders and Clinton for the 2016 Democratic nomination.

On Friday, Sanders pushed back on claims made by Clinton that his campaign was “lying” about donations she has received from the fossil fuel industry.

A day earlier, Clinton became heated on the campaign trail after a Greenpeace activist asked whether she would disavow any “fossil fuel money” in the future.

“I’m so sick of the Sanders campaign lying about this,” she said. “I’m sick of it!” 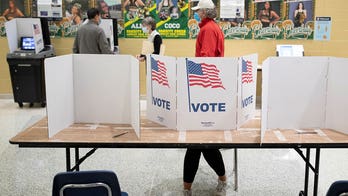