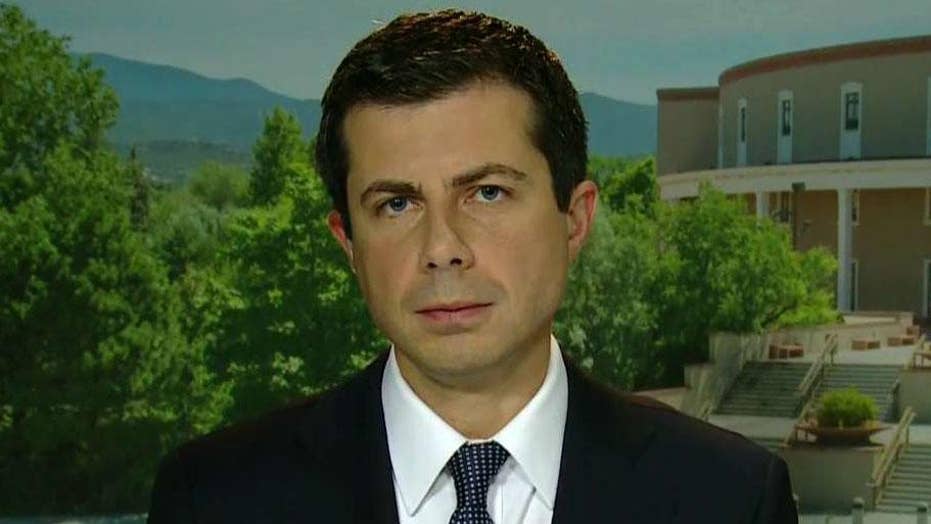 In the wake of the dual massacres in El Paso and Dayton, Democratic presidential hopeful Pete Buttigieg on Tuesday released a comprehensive campaign proposal that he argues will do more to protect Americans from homegrown violence.

The South Bend, Ind., mayor spoke out firmly against white nationalist violence in the hours following the massacre at a Walmart in El Paso, which killed 22. His policy proposal would invest $1 billion to “prevent and combat radicalization and violent extremism.”

Among the tent poles of the policy are efforts to bolster law enforcement with resources to prevent domestic terror attacks before they occur, stop radicalization and the spread of extremist violence online, and reform gun laws to keep firearms from people who shouldn’t have them.

The $1 billion Buttigieg is pledging to law enforcement would specifically be spent expanding the FBI’s ability to prevent domestic terror attacks by expanding its domestic counterterrorism field staff. The campaign cites a congressional testimony by the senior vice president of programs for the Anti-Defamation League.

In the testimony, George Selim references a study that found that 71 percent of Islamist-inspired terrorism arrests in the United States occurred in the planning phase before the violence occurred. However, with far-right extremists in America, the opposite is true; over 71 percent of American far-right extremists successfully carried out violent acts before their death or arrest.

Buttigieg’s plan would also reinvest in the Department of Homeland Security by undoing cuts imposed by the Trump administration on the agency – and specifically its staff dedicated to fighting violent extremism.

Expanding the focus of law enforcement and the intelligence communities on domestic terror attacks, like the one in El Paso, would be effective in mitigating some of the violence, said Scott Stewart, a counterterrorism expert at Stratfor and former investigator for the State Department.

Trying to limit access to weapons by dangerous people is probably a good idea. … It’s crazy to me that someone with rape and kill lists was able to buy a gun legally.

Much of that increased focus should be on predictive behavior, he said, which identifies warning signs and helps law enforcement intervene before a bullet is fired.

Most of these shooters, Stewart said, have a long trail of warning signs.

“Trying to limit access to weapons by dangerous people is probably a good idea. … It’s crazy to me that someone with rape and kill lists was able to buy a gun legally,” he said in reference to the man who opened fire on a crowd outside a bar in Dayton, killing nine.

Police tape drapes over a chair near a pile of shoes after a mass shooting in Dayton, Ohio on Sunday, Aug, 4, 2019. (Marshall Gorby/Dayton Daily News via AP)

A critical portion of counterterrorism in recent years has been closing down propaganda and recruitment networks online. Pushing the Islamic State from Twitter and other mainstream web platforms was critical in stemming the flow of recruits and support for the organization.

Attacking the online platforms used by white nationalists in America is more difficult, given the First Amendment protections they are afforded. Buttigieg’s plan calls for coordination between social media platforms and the government to “limit the spread of hateful ideology.”

The policy recognizes the limitation of enforcing speech online, stating that platforms can “identify and track far-right extremism, within the boundaries of internet companies’ terms of service and consistent with the First Amendment.”

The white supremacists, I believe recently, have begun to copy the kind of propaganda that ISIS has used.

“There is a lot that the social media companies can do, depending on how they frame their terms of service,” Stewart said. “… The more you force it underground, the more it impedes their ability to recruit new adherents to the ideology.”

Stewart said the rise of mass shooters who act without group affiliation is reflected both in American domestic terrorism and jihadism abroad.

“The white supremacists, I believe recently, have begun to copy the kind of propaganda that ISIS has used,” Stewart said. “These [white supremacists] have been there forever, but they didn’t have the same kind of overt violence, glorifying violence, thing that we have now with these newer sites.”

Increasingly, domestic terrorists are acting alone. After the law enforcement cracked down on white supremacist organizations in the 1980s, they began embracing “leaderless resistance.”