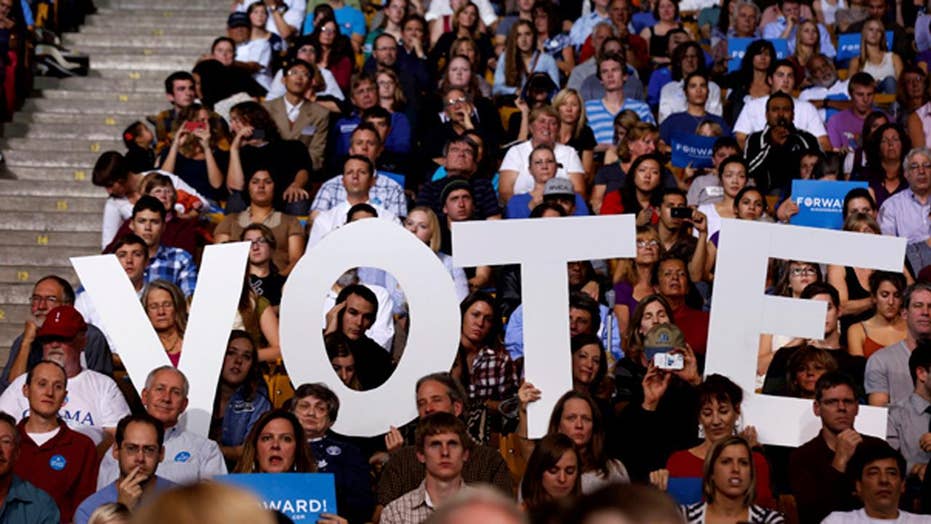 Will Democrats' resistance strategy hurt them in midterm elections?

Marc Lotter, former special assistant to President Trump, on the midterm election and the debt-ceiling deadline.

DATA TRENDS SHOW NO SEAT IS SAFE IN 2018
Cook Political Report: “The first two months of 2018 have given both parties reasons for optimism. Republicans have cut Democrats’ lead in the FiveThirtyEight average  of generic congressional ballot polls in half, from roughly 12 points in December to about six points today. As debates over unpopular health care and tax bills have subsided, news of strong economic data and record-high stocks (at least until late last week) has likely aided the GOP. However, most new district-by-district fundraising and polling numbers are downright terrible for Republicans, even in seats previously thought to be safe. In the fourth quarter of 2017, 39 Republican House incumbents were outraised by at least one Democratic challenger, and private polls and special election results suggest Democrats are highly competitive even in some districts President Trump won by wide margins. At first glance, these two data trends might seem at odds with each other. How could Democrats’ lead in national polls be shrinking while their odds in individual districts improve? The answer: the ‘macro’ outlook for the House (national polls) and the ‘micro’ view (district-by-district) aren’t diverging; they’re coming into alignment.”

Republicans can take comfort in their odds, however - Sabato’s Crystal Ball: “Republicans have better than 50-50 odds to hold control of the U.S. Senate even in the event of a Democratic wave in November. The reason is the map: Including the two independents who caucus with them, the Democrats are defending 26 of the 34 seats being contested this fall, which is the most lopsided Senate map any party has faced in a midterm since 1938. Five of the Democratic seats are in states that Donald Trump won in landslides, and another five are in states he won. Because the map is so good for Republicans, it is possible they will add to their majority even if the electoral environment otherwise breaks against them in other elections, such as those for the U.S. House of Representatives. That said, the Democrats do have a path to a Senate majority, albeit slim.”

Pence shares fundraising love, but not with everyone - Politico: “When Vice President Mike Pence’s leadership PAC contributed on Wednesday to 30 threatened House Republicans across the country, it notably left out the incumbent who arguably needs it most: Rep. Carlos Curbelo. And the omission isn’t necessarily bad news for Curbelo, who occupies the most anti-Trump seat of any Republican running for reelection in Congress. … Curbelo is one of 11 Republicans running for reelection in seats identified as toss-ups by the Cook Political Report. Of them, just four did not receive financial aid from Pence’s Great America Committee on Wednesday: Curbelo, California Rep. Dana Rohrabacher, Colorado Rep. Mike Coffman and Virginia Rep. Barbara Comstock, who received a contribution from the leadership PAC last year.”

House Dems kick fundraising into gear - National Journal: “House Democrats say they have built the largest offensive battlefield in at least a decade—and the numbers back up the claim. Some 180 Democratic House candidates in nearly 100 Republican-held districts entered 2018 with $100,000 or more in the bank, according to a National Journal analysis of Federal Election Commission data. By comparison, when Democrats last claimed the majority in 2006, only about 40 of their candidates in 38 GOP-held districts reached that mark by the start of the election year. Democrats’ task this year will be to translate a banner off-year full of energized grassroots donors and well-funded candidates into a 24-seat net gain that would deliver control of the House. Republicans are already preparing for the worst.”

Dem candidates need standout moments for 2020 - WashTimes: “The 2020 Democratic presidential primary is shaping up as a rhetorical race to the far left, and Sen. Cory A. Booker is making his bid for front-runner status with some of the most incendiary jabs to date. … In a presidential field that some analysts expect to encompass 20 Democrats, the need to gain attention is likely to push candidates to stage even more dramatic moments. ‘How does Booker make himself stand out, especially when there will probably be some marquee names in the field? Become a champion on the issues the Democratic base cares about,’ said Larry Sabato, head of the University of Virginia’s Center for Politics. ‘It isn’t just issues. The anti-Trump fervor among people who will vote in the Democratic primaries and caucuses couldn’t be more intense, and that is very unlikely to dim.’”

THE RULEBOOK: REDO
“If it had been found impracticable to have devised models of a more perfect structure, the enlightened friends to liberty would have been obliged to abandon the cause of that species of government as indefensible.” – Alexander Hamilton, Federalist No. 9

TIME OUT: GIDDY UP!
NatGeo: “The Winter Olympics: Nothing beats the thrill of alpine skiing, the intrigue of figure skating scandals, and the excitement of … being dragged over a lake by a horse? Up until the 1990s, countries that hosted the Winter (or Summer) Games could add ‘demonstration sports’ to their lineup of activities. These weren’t official medal events, and they often showcased niche, regional pastimes. Some of them went on to become official events, but a lot of them (like skijoring, the one with the horse) didn’t. … Skijoring is a race in which skiers hang on to the reins of a horse (or dog) and get pulled along over the ice and snow. It only showed up as a demonstration sport once at the 1928 Winter Games in St. Moritz, Switzerland, where participants raced each other with horses over a frozen lake. Skijoring is still practiced today with both horses and dogs in Europe and North America.”

I’LL TELL YOU WHAT: MEMO MANIA
This week Dana Perino and Chris Stirewalt discuss the potential for a military parade, the latest Peter Strzok and Lisa Page text messages and perhaps a President Eric Holder? Plus, Dana shares a great story about President George W. Bush and Chris tries out some swing state trivia. LISTEN AND SUBSCRIBE HERE

BUDGET DEAL ON DECK, RESULTS TBD
Bloomberg: “The Senate is poised to quickly pass a bipartisan budget deal Thursday that would avert a government shutdown and suspend the federal debt ceiling, but the bill faces less certain prospects in the House because of objections from the chamber’s top Democrat and GOP conservatives. Democratic leader Nancy Pelosi, who emphasized her opposition with an unprecedented eight-hour address on the House floor Wednesday, called it ‘a good bill’ Thursday morning, but said she won’t vote for it without a promise of an open immigration debate. … The dissent in the House was in stark contrast to the comity in the Senate, where Majority Leader Mitch McConnell and Democratic leader Chuck Schumer delivered laudatory back-to-back speeches on the accord, which would add nearly $300 billion for government programs and suspend the debt ceiling until March 2019. The bill, released overnight, authorizes the sale of 100 million barrels from the Strategic Oil Reserve to pay for some of the new spending, and raises customs and airport security fees in the next decade.”

House Freedom Caucus holds opposition to the bill - WashTimes: “The conservative House Freedom Caucus said Wednesday night that it officially opposes the budget deal struck by senators earlier in the day. The deal ends sequestration caps on the Pentagon without acceding to Democratic demands for equals boosts to domestic spending, but it still raises spending by nearly $300 billion over the next two fiscal years. That was a bridge too far for the Freedom Caucus. ‘Official position: HFC opposes the caps deal. We support funding our troops, but growing the size of government by 13 percent is not what the voters sent us here to do,’ the conservative group posted on Twitter. The rejection had been predicted earlier in the day by Rep. Mark Meadows, North Carolina Republican and the group’s chairman.”

HOUSE INTEL COMMITTEE DEBATES JUSTICE ROBERTS TESTIMONY
The Hill: “House Intelligence Chairman Devin Nunes (R-Calif.) has weighed whether it would be possible to bring Chief Justice John Roberts to ‘testify’ before Congress as part of his investigation into political malfeasance at the Department of Justice. In an interview with Hugh Hewitt on Wednesday, Nunes said GOP investigators had ‘grappled’ with how to approach the courts about their conclusion that the FBI misled a clandestine surveillance court. Roberts appoints the judges to that court. ‘This is something that we have, like I said, we have thought a lot about this. And the answer is we don’t know the correct way to proceed because of the separation of powers issue,’ Nunes said… The ‘next step,’ Nunes said, is to send a letter to courts to make them aware of his findings. But he and his staff are still debating whether to approach the Supreme Court or the surveillance court.”

The Judge’s Ruling: Pay attention - Fox News Senior Judicial Analyst Judge Andrew Napolitano explains why Americans should care about everything from the memos to the FISA courts: “The loss of liberty rarely comes about overnight or in one stroke. In a democracy, that loss is normally a slow process, often pushed along by well-intentioned folks who do not even realize until it is too late that they have created a monster. FISA is a monster. It began as a means of surveilling foreign agents in the U.S., and today it is used for surveilling any American at any time.” More here.

AUDIBLE: KEEP IT LOW KEY
“I think confidence is silent and insecurity is loud. America is the most powerful country in all of human history, everybody knows it, and we don’t need to show it off.” – Sen. John Kennedy, R-La., in response to the president’s idea for a military parade.

THAT’S NO EGGS-AGGERATION
Chicago Sun Times: “A Google Translate error resulted in Norway’s Olympic Team receiving 15,000 eggs. Norway’s Olympic Team chefs were compiling a grocery list for its Olympic athletes competing at the 2018 Winter Games in South Korea. Due to the language barrier, the chefs used Google Translate to help them order from a Korean grocery store. But when truckloads full of eggs showed up at Norway’s camp shortly after the transaction, the chefs quickly realized there was an error in their translation through Google. Rather than ordering 1,500 eggs, the chefs ordered 15,000 — that’s equivalent to 1,250 cartons of 12. ‘There was literally no end to the delivery. Absolutely unbelievable,’ chef Ståle Johansen told Norway’s Aftenposten. Fortunately, the chefs will be able to return the 13,500 eggs they received.”