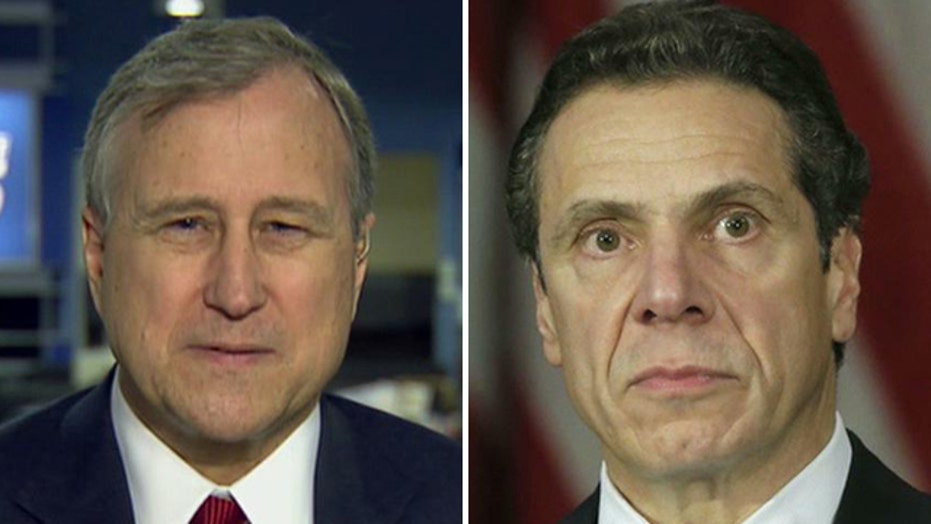 Should Gov. Cuomo apologize for comments on conservatives?

Move over Chris Christie, two other guvs – one sitting, one ex -- are getting serious heat on Twitter for what seem like dumb moves.

Let’s start with New York Gov. Andrew Cuomo who made a point to tell pro-life, anti-gay marriage, and pro-assault weapon voters they aren’t welcome in the Big Apple.

“They have no place in the state of New York, because that’s not who New Yorkers are.”

The language he used caused Sean Hannity to threaten, on his radio show, to move out of the state.

“Gov. Cuomo, I’m going to leave and I’m taking all of my money with me — every single solitary penny.”

And on Greta’s “On the Record” show yesterday, he said he’d talked to his wife and would leave New York “as soon as I am able” which is probably after his son graduates from high school.

All this talk of fleeing the Empire State gave an opening for yet another guv to show some Southern hospitality for the scorned.

And for the Texas lieutenant governor – along with Rick Perry and Ted Cruz -- to roll out the red carpet:

Cuomo walked back his remarks. His attorney said, "The Governor was making the point that he makes often: New York is a politically moderate state and an extremist agenda is not politically viable statewide.”

But the damage, for many conservatives, was already done.

Is crapweasel really a word?

From critical comments to criminal allegations. Former Virginia Gov. Bob McDonnell and his wife were handed a 14-count indictment for illegal ties to a Virginia business man and donor. According to allegations, they requested use of his private plane, and received loans, expensive clothes, and jewelry in exchange for introductions to state officials.

The McDonnells say they did nothing illegal.

One of the most damning emails comes after the election from his wife to Walker. She asked Williams to buy her an inaugural dress, but the staff told her it was inappropriate. She replied with a final plea.

“Bob is screaming about the thousands I’m charging up in credit card debt. We are broke ... I need to get this done,”

She never got the dress, but here’s what they could lose if convicted.

For political watchers like NBC’s Chuck Todd, the stupidity of alleged pay-for-play is incomprehensible.

Toronto Mayor Rob Ford is at it again, mon.

The crack-smoking, lying, drunken mayor can be seen in his glory in a new one-minute YouTube video where he talks with a Jamaican accent, and rants incoherently about the police chief.

It all happened at “Steak Queen,” a takeout steak joint with dirty floors.

Joshua Benton, Director of the Neiman Lab at Harvard, wonders if Ford is really who he says he is.

In the latest video, Ford says he’s a “straight up guy.”  That settles that.

Oh, and his approval rating is 47 percent -- higher than Barack Obama's.