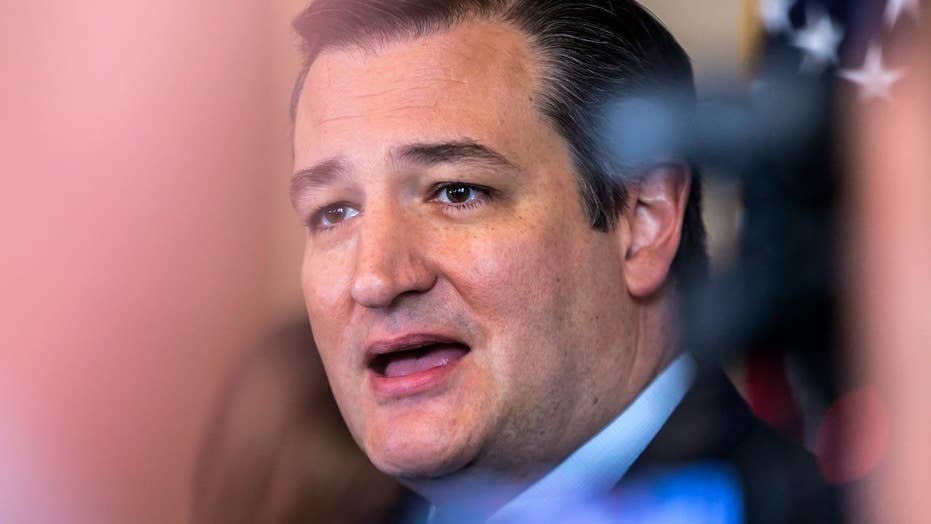 Both Cruz and Sanders charged out of Wisconsin claiming momentum was turning in their favor. Sanders, who notched his sixth victory in the last seven state contests, won all but three of the Badger State's 72 counties.

“And we have won almost all of them with overwhelming, landslide numbers,” Sanders told an ebullient crowd of supporters Tuesday night.

Sanders was speaking in Wyoming, which holds a caucus contest this weekend. But the next big primary will be in New York on April 19, and Sanders has vowed to take on Clinton in her adopted home state.

Cruz also pointed to his win Tuesday as a sign the tides are turning against Republican front-runner Trump, who faced one of the roughest weeks of his campaign going into the primary.

"Tonight is a turning point," Cruz declared at a rally in Milwaukee. "It is a rallying cry. It is a call from the hard-working men and women of Wisconsin to the people of America: we have a choice. A real choice."

Yet Cruz, despite winning in Wisconsin and outmaneuvering Trump lately in the grueling battle for delegates, still faces challenging terrain in the weeks ahead. Trump has a clear lead in New York polls, and his campaign claimed "total confidence" they would win that race.

Trump's campaign also put out a biting statement Tuesday night that said Cruz was "worse than a puppet--- he is a Trojan horse, being used by the party bosses attempting to steal the nomination from Mr. Trump."

Even if Trump holds his ground in New York, however, Cruz's Wisconsin win only increases the odds that the Republican Party will hold its first open convention in four decades this July, a scenario Trump seemed to be referring to.

Any candidate would need 1,237 delegates to clinch the nomination before then, and Cruz's Wisconsin victory makes that number very difficult for Trump to obtain.

Exit polls showed disquiet about Trump among Wisconsin Republicans. In the Fox News survey of 1,532 primary voters, 58 percent of respondents said they were either concerned or scared about the prospect of Trump being elected president. More worryingly for the Trump campaign, 37 percent said they would not vote for him if he faced Clinton in November's general election.

On the Democratic side, returns showed Sanders with 56 percent of the vote to Clinton's 43 percent with 99 percent of precincts reporting.

The victory helps fuel Sanders' argument that the Democratic primary is far from over, even as front-runner Clinton tries to turn her attention to the general election.

Exit polls in the Democratic race show Sanders won in part with the help of independent voters, 72 percent of whom broke for the Vermont senator.

While the Cruz and Sanders wins in Wisconsin won't necessarily shorten the odds on either winning their party’s nomination, the losses by the front-runners keep an aura of uncertainty hanging over both races.

Cruz, enjoying the support of Wisconsin Gov. Scott Walker, campaigned harder than anybody in the Midwestern state. Buoyed by conservative talk show hosts and others opposed to a Trump bid, the Texas senator led in most GOP polls leading up to Tuesday’s primary.

For Trump, the long lead-up to Wisconsin's contest has included one of the worst stretches of his candidacy. He was embroiled in a spat involving Cruz's wife, which he now says he regrets, was sidetracked by his campaign manager's legal problems after an altercation with a female reporter, and stumbled awkwardly in comments about abortion.

Still, Trump made a spirited final push in the state. His campaign said Tuesday night he withstood an "onslaught of the establishment" in Wisconsin.

Complicating the primary landscape for both Cruz and Trump is the continuing candidacy of Kasich. The Ohio governor's only victory has come in his home state, but he's still picking up delegates that would otherwise help Trump inch closer to the nomination or help Cruz catch up.

Trump has joined Cruz in calling for Kasich to end his campaign. But Kasich cast Trump's focus on him as a sign that he's best positioned to win over the businessman's supporters.

For Republicans, 42 delegates were at stake Tuesday. According to an Associated Press count late Tuesday, Cruz won 33 of 36 allocated Wisconsin delegates, with Trump winning the other three and six delegates still outstanding. With the latest results factored in, Trump has 740 delegates to Cruz's 514. Kasich is a distant third with 143 delegates.

For Democrats, 86 delegates were on the line Tuesday in Wisconsin. With his victory, Sanders won 45 delegates to Clinton's 31, with 10 delegates outstanding, according to an Associated Press count. When including superdelegates, the party officials who can back any candidate, Clinton holds 1,743 delegates to Sanders' 1,056. It takes 2,383 delegates to win the Democratic nomination.

On the eve of voting in Wisconsin, Clinton's campaign manager argued that Sanders' only path to victory "relies on overturning the will of the voters." In a memo to supporters, Robby Mook wrote that Sanders' strategy now is "a combination of trying to flip pledged delegates at state and county conventions, while also convincing superdelegates that he deserves their support."