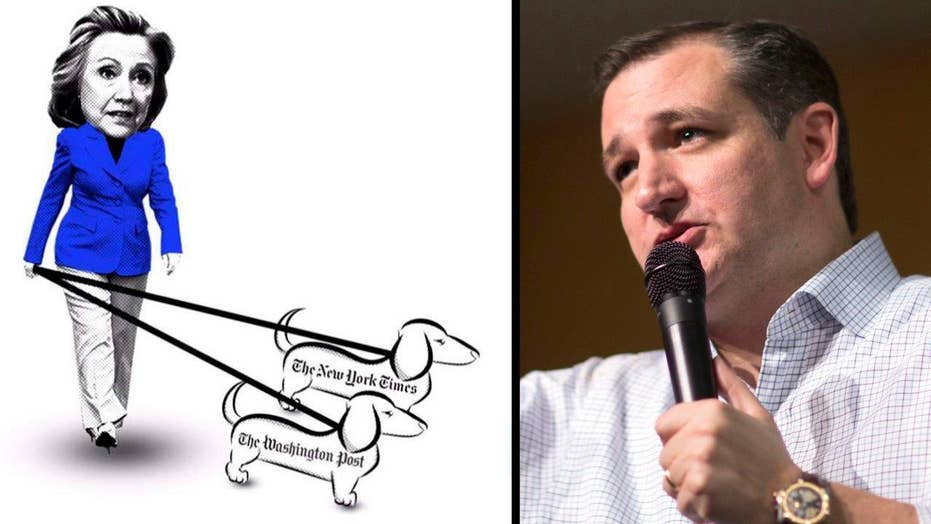 Cruz fires back at WaPo with his own political cartoon

Republican presidential candidate Ted Cruz fired back at The Washington Post with a political cartoon of his own portraying the paper as one of Hillary Clinton’s “lapdogs,” after the Post ran a cartoon depicting his daughters as monkeys.

The newspaper pulled that Cruz cartoon Tuesday from its website, saying "it's generally the policy of our editorial section to leave children out of it."

But the incident touched off a firestorm, as Cruz lambasted the paper for mocking his children and other candidates leapt to his defense.

On Wednesday afternoon, the Texas senator escalated his criticism by tweeting his own sketch -- of Clinton walking two “lapdogs,” named The Washington Post and The New York Times.

Seems like a better idea for a cartoon: Hillary and her lapdogs. pic.twitter.com/dou9c7fS4U

Speaking to reporters in Tulsa, the senator said he generally has thick skin but was irritated after seeing the Post cartoon.

He said he appreciated the newspaper pulling the cartoon. "That was the right thing to do," he said.

The cartoon was done by Ann Telnaes, who apparently published it in response to a Cruz online ad showing him reading politics-related Christmas stories to his daughters, 7-year-old Caroline and 4-year-old Catherine.

After that ad, Telnaes said on Twitter: “Ted Cruz has put his children in a political ad- don't start screaming when editorial cartoonists draw them as well.”

She then produced the cartoon, which depicted Cruz as an organ grinder dressed in a Santa Claus costume while two similarly-clad monkeys danced on leashes in front of him. The cartoon was captioned, "Ted Cruz uses his kids as political props."