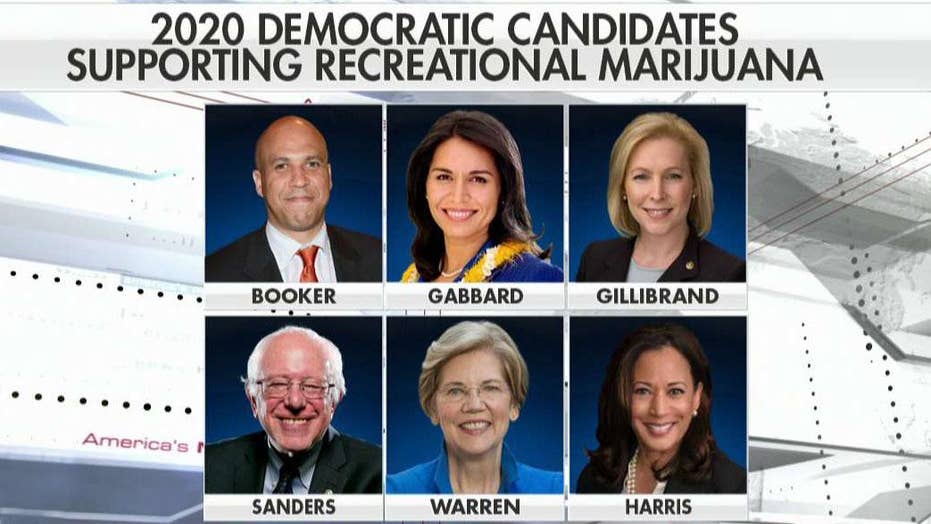 Democratic strategists Al Mottur and Jessica DeLoach weigh in on whether or not Democrats will make legalizing recreational marijuana part of their 2020 campaign platform.

Harris' support seemingly cemented her full-scale reversal on the issue. In 2010, Harris was among a handful of lawmakers — including then-Gov. Arnold Schwarzenegger — to oppose Proposition 19, a measure to legalize recreational marijuana and allow it to be sold and taxed. Then San Francisco's district attorney, Harris called Proposition 19 a “flawed public policy.”

The move comes as polling increasingly shows widespread national support for legalizing the drug. A Fox News poll last year showed that 59 percent of voters support legalizing marijuana -- up from 51 percent in 2015, and 46 percent in 2013. Only 26 percent favored making “smoking marijuana” legal in 2001.

"The War on Drugs has not been a war on drugs, it’s been a war on people, and disproportionately people of color and low-income individuals,” Booker said in a statement. “The Marijuana Justice Act seeks to reverse decades of this unfair, unjust, and failed policy by removing marijuana from the list of controlled substances and making it legal at the federal level.”

Booker added: “But it’s not enough to simply decriminalize marijuana. We must also repair the damage caused by reinvesting in those communities that have been most harmed by the War on Drugs. And we must expunge the records of those who have served their time. The end we seek is not just legalization, it’s justice.”

Booker's bill was co-sponsored not only by Harris, Sanders, Gillibrand, and Warren, but also by Sens. Ron Wyden, D-Or., Jeff Merkley, D-Or., and Michael Benne, D-Co.

HOW KAMALA HARRIS' RECORD ON MARIJUANA HAS COMPLETELY CHANGED

“Millions of Americans’ lives have been devastated because of our broken marijuana policies, especially in communities of color and low-income communities,” Gillibrand said. “I’m proud to work with Senator Booker on this legislation to help fix decades of injustice caused by our nation’s failed drug policies.”

Added Sanders: “As I said during my 2016 campaign, hundreds of thousands of people are arrested for possession of marijuana every single year. Many of those people, disproportionately people of color, have seen their lives negatively impacted because they have criminal records as a result of marijuana use. That has got to change. We must end the absurd situation of marijuana being listed as a Schedule 1 drug alongside heroin. It is time to decriminalize marijuana, expunge past marijuana convictions and end the failed war on drugs.”

For her part, Harris echoed Booker's sentiments and seemingly embraced her changed views on marijuana. Despite her past opposition to legalizing the drug, the former California attorney general recently boasted about smoking weed as a college student on the popular New York City-based radio program "The Breakfast Club," telling hosts DJ Envy, Angela Yee and Charlamagne tha God that she's "inhaled" from a joint "a long time ago."

“I think it gives a lot of people joy. And we need more joy in the world," Harris added, claiming she used to listen to Snoop Dogg and Tupac Shakur — though they didn't release their albums during Harris' college years — while she reportedly got high.

WHOOPS: HARRIS SAYS SHE GOT HIGH LISTENING TO SNOOP DOGG AND TUPAC ... BEFORE THEY MADE MUSIC

In co-sponsoring Booker's bill on Thursday, Harris, like Booker, suggested that prohibitions on the drug disproportionately affect black men.

“Marijuana laws in this country have not been applied equally, and as a result we have criminalized marijuana use in a way that has led to the disproportionate incarceration of young men of color. It’s time to change that,” Harris said. “Legalizing marijuana is the smart thing to do and the right thing to do in order to advance justice and equality for every American.”

Warran, meanwhile, added: “Marijuana should be legalized, and we should wipe clean the records of those unjustly jailed for minor marijuana crimes. By outlawing marijuana, the federal government puts communities of color, small businesses, public health and safety at risk."

California state medical board also found Eidelman hastily diagnosed ADHD and Bipolar Disorder in the child in addition to approving marijuana edibles to give him for his 'uncontrollable behavior and tempter tantrums.

Last year, California became the largest legal U.S. marijuana marketplace, Massachusetts opened the first recreational shops on the East Coast, Canada legalized it in most provinces, and Mexico's Supreme Court recognized the rights of individuals to use marijuana, moving the country closer to broad legalization.

New Hampshire lawmakers on Wednesday gave preliminary approval to legalizing recreational marijuana, dismissing public safety and health concerns on a path to join scores of other states that have passed similar cannabis measures.

Ten states have legalized recreational marijuana — including the three bordering New Hampshire — while New York, New Jersey and others are considering it this year.