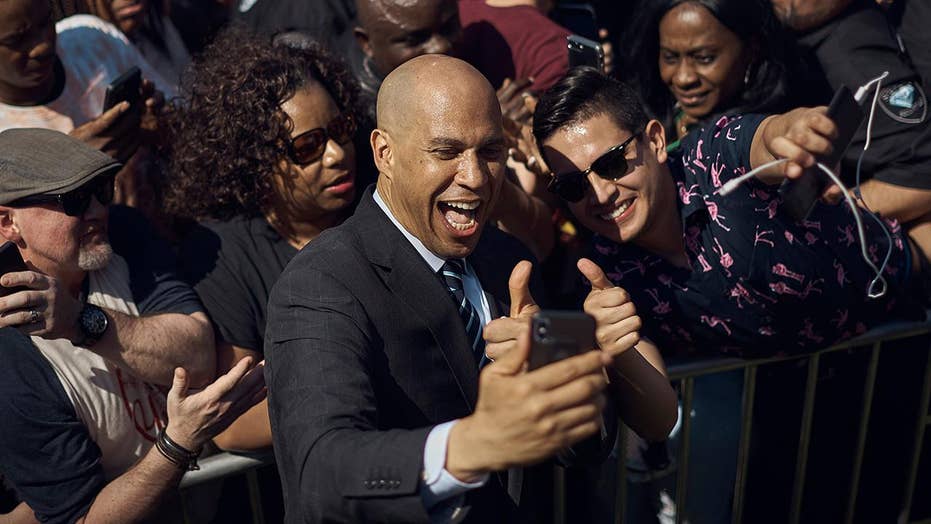 Democratic presidential candidate Cory Booker gave a pass to Rep. Ilhan Omar and her history of controversial comments, ignoring his own party’s condemnation, and instead said President Trump’s criticism of her leads to right-wing terrorism in the country.

Sen. Booker on Wednesday appeared together with other 2020 Democratic candidates at the She The People Forum in Houston.

Shortly after taking the stage, the New Jersey senator was asked what is he going to do about Omar being the target of hate after her comments about “the outsize influence of AIPAC in determining U.S. foreign policy” and other flippant remarks prompted criticism both the House Democratic Leadership and from President Trump.

“What will you do as president to protect the right of courageous women of color to criticize U.S. policy even when directed at allies?” a woman asked Booker.

Without addressing his own party’s critics of Omar, including a House resolution that condemned hate after her comments that were largely perceived as anti-Semitic, Booker unloaded solely on Trump.

“The criticisms of Congresswoman Omar, what Donald Trump has been saying about her is reprehensible, it is trafficking in Islamophobia, and it should be condemned by everyone,” he said. “This kind of selective condemnation should be a chorus of people condemning it.”

The Minnesota Democrat has been embroiled in a series of controversies since taking office in January. Earlier this month, Omar was accused of being flippant after referring to the September 11, 2001, terror attacks as “some people did something.”

Just weeks later, Omar reignited the controversy, this time saying that supporters of Israel were pushing for U.S. politicians to declare “allegiance” to that nation.

Yet Booker continued his answer reiterating that Trump’s criticism of Omar “fuels the kind of hate we see in our communities, manifesting itself in the kind of terrorism that has been most seen in our nation since 9/11.”

“Most of the terrorist attacks in our nation since 9/11 have been right-wing extremist attacks. The majority of those have been white supremacist attacks,” he said to the crowd’s cheers.

“And so when you have a president uttering such bigotry, and uttering such racist attacks, talking about nations where black and brown people have come from in this nation as sh--hole countries …That is giving license to hate and to violence that we should not be tolerating,” he continued.

“So it’s not just important to be an ally. As one of our great black women has said in the past, it’s not enough just to say I’m not a racist. We must, where racism exists, all be anti-racist,” Booker concluded.