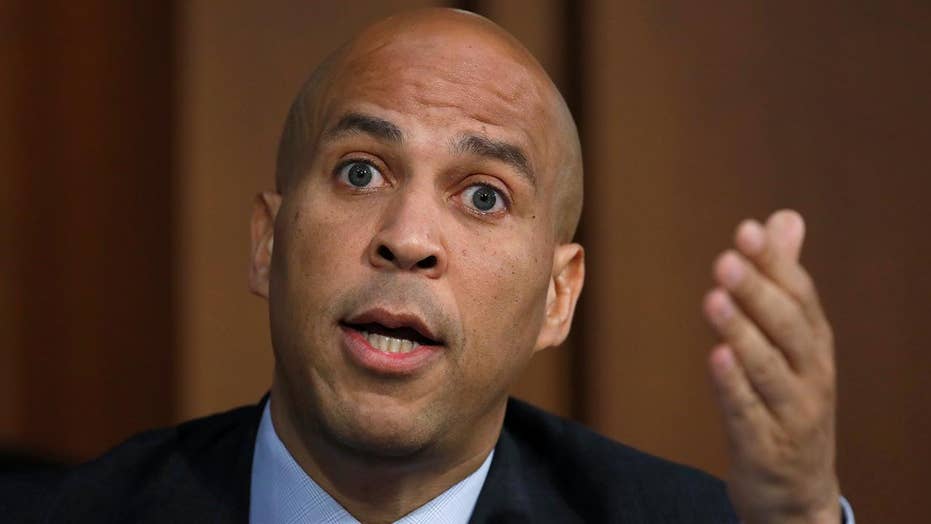 Democratic Sen. Cory Booker, amid the ongoing FBI probe into sexual assault allegations against Brett Kavanaugh, suggested the Senate needs to “move on” to another Supreme Court nominee whether Kavanaugh is innocent or guilty.

Booker, D-N.J., days earlier backed the FBI’s re-opened supplemental background investigation into Kavanaugh. But amid speculation that the probe could come to an end any day now, Booker indicated Tuesday that it's too late for Kavanaugh. He said his "credibility" has already been challenged and his "temperament" revealed at last week's heated hearing with him and accuser Christine Blasey Ford.

“Ultimately, not whether he's innocent or guilty -- this is not a trial -- but ultimately, have enough questions been raised that we should not move on to another candidate?” Booker, a potential 2020 presidential candidate, said on Capitol Hill Tuesday.

Republicans seized on the remarks, with GOP Chairwoman Ronna McDaniel tweeting that it shows "Senate Democrats finally admit that they don’t even care about getting to the truth."

“The case against Judge Kavanaugh grows weaker by the day," Judicial Crisis Network’s Chief Counsel Carrie Severino said in a statement to Fox News. "Not only should he be presumed innocent in accordance with our centuries-old values of fairness and justice, but all the witnesses who Dr. Ford places at the scene either don’t corroborate her allegations or refute them altogether."

Booker’s comments come as new allegations surface against Kavanaugh, but also as questions are being raised about those allegations already made.

Ford, who testified before the Senate Judiciary Committee last week, alleged that Kavanaugh, while at a high school party 36 years ago, pinned her down and tried to remove her clothing. Another, Deborah Ramirez, claimed that during their freshman year at Yale University, Kavanaugh exposed himself to her at a dorm party. And Julie Swetnick, who is represented by Stormy Daniels’ attorney Michael Avenatti, claimed that Kavanaugh drugged the “punch” at parties, and participated in “gang” and “train” rapes while in high school.

Swetnick has since walked back some elements of her account, and the names of witnesses she provided have not at this point supported her story. Kavanaugh has vehemently denied the allegations.

President Trump, meanwhile, has ramped up his criticism of Democrats' handling of the confirmation process. At a rally in Mississippi on Tuesday evening, he accused Democrats of only knowing how to "obstruct, resist, demolish, destroy and delay" and claimed they'd been "trying to destroy Judge Kavanaugh" since the beginning.

"Because they know Judge Kavanaugh will follow the Constitution as written," he said.

But Booker on Tuesday slammed the nominee, noting that Kavanaugh’s “credibility has been challenged by intimates, by people who knew the candidate well as a classmate.”

Booker opposed his nomination before any of the accusations surfaced. In July, at a press conference, Booker said supporting Kavanaugh would be “evil.”

“In a moral moment, there is no bystanders,” he said this summer. “You are either complicit in the evil, you are either contributing to the wrong, or you are fighting against it.”