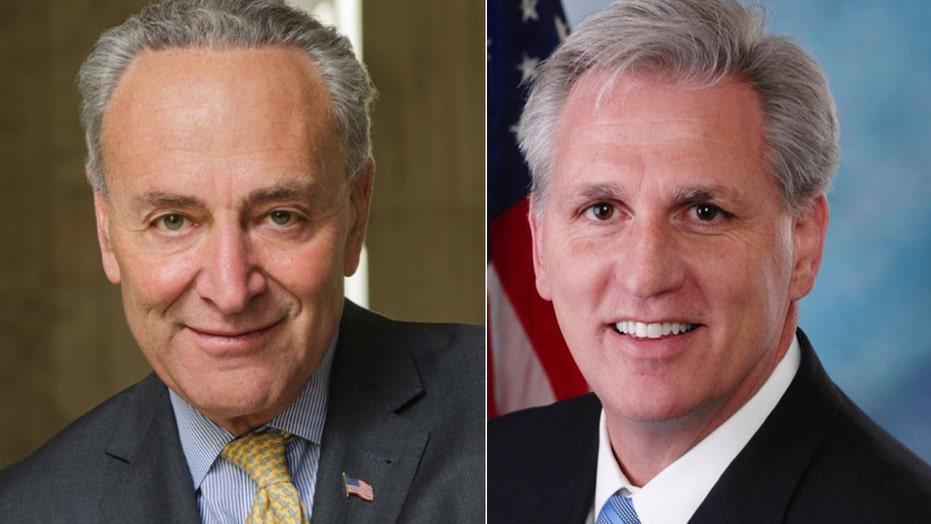 Coronavirus not immune to politics as lawmakers quarrel over response

Democrats spar with the White House over the amount of funding to be allocated for the response; Mike Emanuel reports from Capitol Hill.

As the coronavirus has swept around the world, sickening and killing thousands, the U.S. government's response to the crisis has become gripped by political infighting between President Trump and Democrats.

One of the highest-profile confrontations has been the fight over funding to combat the outbreak. Trump requested $2.5 billion in funding from Congress for the coronavirus response, an amount that Senate Minority Leader Chuck Schumer, D-N.Y., said was too little as he panned the Trump administration's preparedness for a disease federal officials say may cause "severe" disruption to everyday life in the U.S.

"With no plan to deal with the potential public and global health crisis related to the novel coronavirus, the Trump administration made an emergency supplemental appropriations request on Monday," Schumer said in a statement Wednesday. "It was too little and too late — only $1.25 billion in new funding. For context, Congress appropriated more than $6B for the Pandemic Flu in 2006 and more than $7B for H1N1 flu in 2009."

"For almost two years, the Trump Administration has left critical positions in charge of managing pandemics at the National Security Council and the Department of Homeland Security vacant. His most recent budget called for slashing funding for the Centers for Disease Control, which is on the frontlines of this emergency," Pelosi said. "Weeks after the Trump Budget called for slashing the CDC budget during this coronavirus epidemic, this undersized funding request shows an ongoing failure to understand urgent public health needs."

Congressional Republicans and Democrats have both proposed funding packages larger than what the White House requested. Trump has said he will take whatever lawmakers give him, and Health and Human Services Secretary Alex Azar changed his language during a House committee hearing Wednesday to say that the administration needs "at least" the $2.5 billion it asked for.

In his Wednesday night press conference on the coronavirus threat, Trump criticized the Democratic leaders for their tone on funding while fitting in a couple of insults.

"But we have to work together," Trump continued. "Instead, she wants to do the same thing with cryin' Chuck Schumer. He goes out and he says the president only asked for $2.5 billion, he should have $8.5 billion. This is the first time I've ever been told that we should take more. Usually, it's we have to take less."

Seemingly in response to Trump's Wednesday comments, Pelosi and Schumer released a joint statement on Congress' plans for coronavirus funding Thursday morning which appeared to admonish the president without naming him.

Pelosi and Schumer then went on to lay out a handful of demands for any congressional appropriations to fight coronavirus. Those demands included that the funding be new and not "stolen from other accounts," safeguards against the president potentially transferring the money to use on something else, that vaccines be affordable, that interest-free loans be available to small businesses and provisions be available to reimburse state and local governments that help the federal government combat the disease.

There was also some palace intrigue as Trump named Vice President Pence to lead the coronavirus response within the U.S. government over Azar, after Azar had said the same day that he was in charge of the response.

But the move to put Pence in charge of protecting Americans from the outbreak drew scorn from the left, including from Rep. Alexandria Ocasio-Cortez, D-N.Y., who panned Pence's handling of HIV while he was the governor of Indiana.

"As governor, Pence’s science denial contributed to one of the worst HIV outbreaks in Indiana’s history," she tweeted. "He is not a medical doctor. He is not a health expert. He is not qualified nor positioned in any way to protect our public health."

"Pence’s plan is 'just don’t ever be alone in a room with the coronavirus,'" it posted, referencing the religious conservative's personal rule that he will not spend time alone with a woman who is not his wife.

Coronavirus politics has also made its way to the campaign trail, with presidential candidates laying out how they would respond to the outbreak. They used the chance to hammer Trump.

"Like so much else, the Trump administration’s bungled response to the coronavirus outbreak is a mess," Sen. Elizabeth Warren, D-Mass., tweeted. "As president, I will lead a competent administration prepared to combat outbreaks—because our public health, economy, and national security depend on it."

US CONFIRMS FIRST CORONAVIRUS CASE WITH NO LINK TO CHINA

"I led NYC through its recovery after 9/11 and the financial crisis," the billionaire tweeted Wednesday. "We faced health epidemics and weather emergencies. The key to leading in a crisis like the Coronavirus is sharing the facts, demonstrating control and trusting the experts. Unfortunately, not Trump's strong suit."

Trump, however, has said that Democrats and the media are playing up the threat the coronavirus poses for political gain, as he has sought to ease fears about the virus this week not just in his Wednesday press conference, but in public appearances during his trip to India and on Twitter.

"Low Ratings Fake News MSDNC (Comcast) & @CNN are doing everything possible to make the Caronavirus [sic] look as bad as possible, including panicking markets, if possible," Trump posted Wednesday morning before a third straight day of stocks falling over fears about the disease. "Likewise their incompetent Do Nothing Democrat comrades are all talk, no action. USA in great shape!"

The coronavirus, which causes a disease officially known as COVID-19, has not yet hit the U.S. as hard as it has hit many Asian countries, though U.S. authorities recently confirmed the first American coronavirus case that had no link to international travel in California, indicating the disease is now spreading in at least one American community. Other areas of the country are also currently testing suspected cases of coronavirus.

Trump's Wednesday press conference does not appear to have calmed markets, as the Dow Jones Industrial Average was down almost 500 points minutes after trading opened Thursday.