The event, titled, “A Global Crisis: Refugees, Migrants, and Asylum Seekers – Lessons from the Prophet Muhammad,” was organized by the group Muslims4Peace. Hikind described the New Jersey event as “fine” and spreading “nice messages” of tolerance, unity, and love.

"I loved what they were saying," Hikind said, noting that he sat in the audience for nearly three hours.

“Then Rashida came on at the end as the main speaker,” Hikind told Fox News, adding that he stood up and asked her about “her anti-Semitism and spreading a blood libel.” The blood libel originally referred to the false claim during the Middle Ages that Jews used Christian blood to make matzah for Passover, but has since been used to describe other false claims that Jews committed heinous acts. 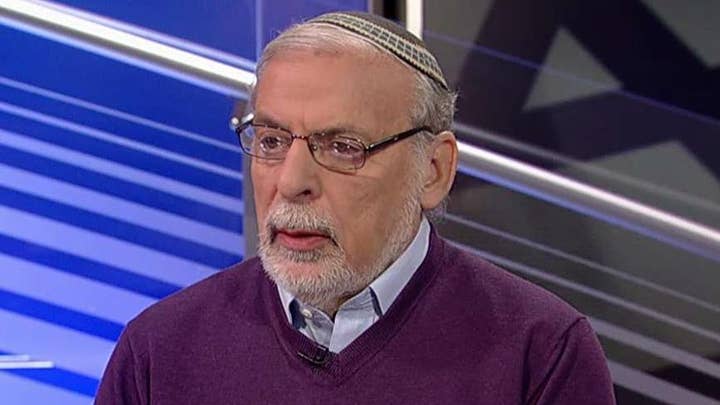 Hikind was referring to Tlaib retweeting a message from Palestinian official Hanan Ashrawi that spread the unsubstantiated claim that Israeli Jews murdered 8-year-old Palestinian Qais Abu Ramila, who went missing in January before he was found dead. Abu Ramila’s death was later ruled an accidental drowning.

"She never apologized," Hikind said about Tlaib. "This, to me, is serious stuff."

Ashrawi apologized for spreading the false message. Three days later, Tlaib shared Ashrawi’s apology with a message of her own. While she did not technically apologize, she said, “In this era of inaccurate and manipulative news, I will also strive to hold myself to the highest standards for what I share.”

Hikind lamented not receiving a response to his question, and the swift and forceful reaction when he asked it. As soon as he asked the question, multiple people rushed over to him and he was soon escorted out.

“As soon as I did that one man pounced on me and I told him to immediately get his hands off and he did. The cops were not far behind and removed me before I could get any response from Tlaib,” Hikind said. He shared video of the incident on Twitter.

“She didn't offer any justification or apology for perpetuating a dangerous anti-Jewish blood libel even after I had been ejected, instead she played the victim as she does so expertly,” he told Fox News.

RASHIDA TLAIB ON WALKING OUT OF SOTU: 'EVEN THE MENTION OF BRETT KAVANAUGH FOR ME IS A TRIGGER'

A Rutgers spokesperson told Fox News the event “was not sponsored or endorsed by Rutgers,” and that the university only provided a venue.

“Rutgers is committed to diversity, inclusion and fostering a campus community in which people of all backgrounds are treated with respect,” the spokesperson said.

Tlaib’s office did not immediately respond to Fox News’ request for comment.

This was not Hikind’s first clash with a member of the group of freshman congresswomen known as the “Squad.” Hikind sued Rep. Alexandria Ocasio-Cortez, D-N.Y., after she blocked him on Twitter, citing a recent court decision that said it was a First Amendment violation when President Trump blocked critics.

A day before Ocasio-Cortez was scheduled to testify in the case, the two sides reached a settlement agreement, with the congresswoman apologizing.