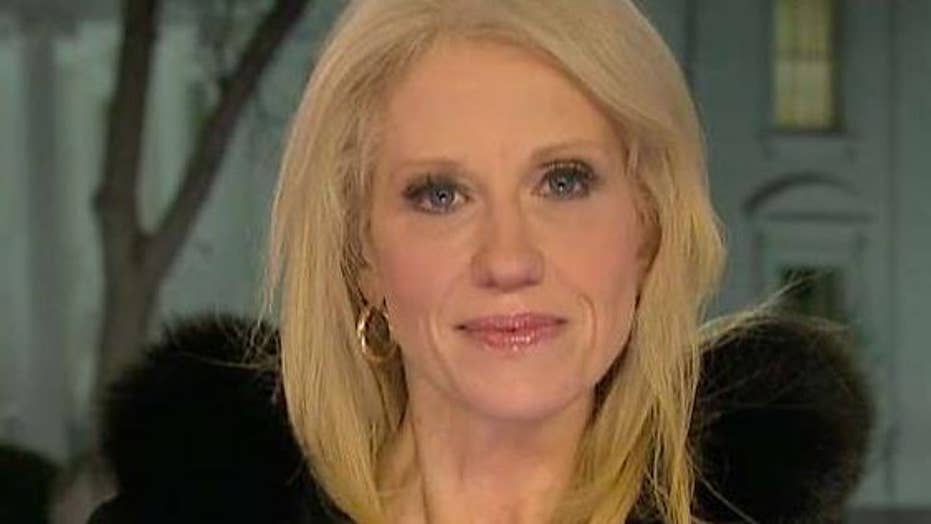 Counselor to the president weighs in on 'The First 100 Days'

White House Counselor Kellyanne Conway said Friday that President Trump has her back, amid a controversy over comments she made promoting Ivanka Trump’s fashion line.

Conway, appearing on "The O'Reilly Factor," said the president "backs me 100 percent...he understands the fire we all take here."

White House spokesman Sean Spicer said Conway had been "counseled" on her comments.

POTUS supports me, and millions of Americans support him & his agenda. https://t.co/FTaPXTymGV

Conway tweeted Friday: “POTUS supports me, and millions of Americans support him & his agenda.”

A White House spokeswoman said that while Trump didn't see Conway's television comments urging people to buy Ivanka Trump's products, he believed she was "merely sticking up" for his daughter after Nordstrom dropped her brand.

Earlier this week, Trump blasted Nordstrom on Twitter, claiming his daughter had been treated “unfairly” by the high-end retailer. The tweet prompted complaints from ethics experts, but Conway’s comments, at the end of an interview Thursday morning with “Fox & Friends,”  quickly escalated into a bigger controversy.

In the interview, Conway lamented Ivanka Trump’s treatment in the business world and said: “Go buy Ivanka’s stuff … It’s a wonderful line, I own some of it. … I’m going to give a free commercial here. Go buy it today, everybody. You can find it online.”

Chaffetz, not typically critical of the Trump administration, told the AP that Conway's actions were "wrong, wrong, wrong, clearly over the line, unacceptable."

The Utah congressman and the ranking Democrat on the committee, Elijah Cummings of Maryland, jointly asked for the ethics review. The duo said Conway’s statements “appear to violate federal ethics regulations," adding that “Conway’s statements from the White House using her official title could appear to constitute an explicit endorsement for Ivanka Trump’s personal business activities.”

The Office of Government Ethics advises federal employees on such issues but is not an enforcement agency.

While Trump and Vice President Pence are not subject to ethical regulations and laws for federal employees, Conway is. Among the rules: An employee shall not use his or her office "for the endorsement of any product, service or enterprise."

But because Conway reports only to Trump, it could be up to him to punish her for any ethics infraction and that seems unlikely.

Nordstrom reiterated that its decision to drop Ivanka Trump's brand was based on its performance, not politics. The company said sales of her items had steadily declined over the past year, particularly in the last half of 2016, "to the point where it didn't make good business sense for us to continue with the line for now."

While Ivanka Trump has handed over management of her company while she is in Washington, like her father, she retains ownership of it.