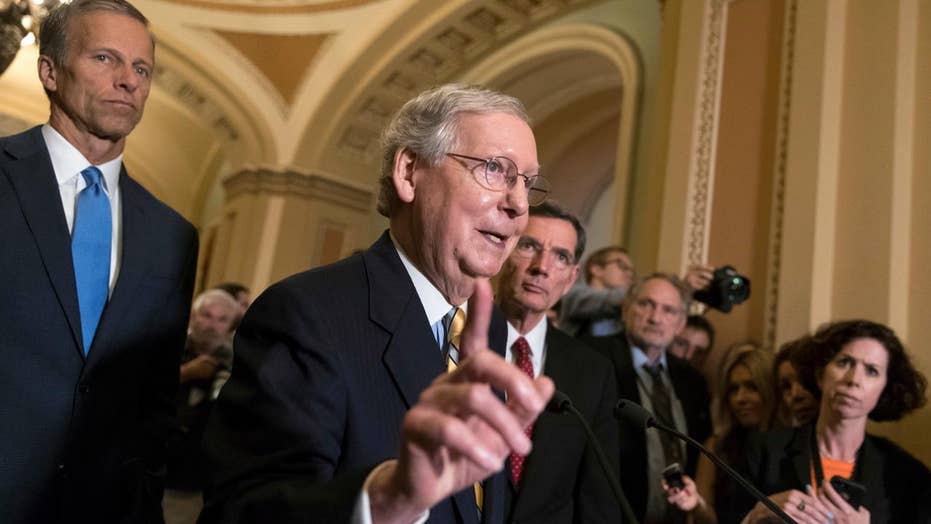 CONGRESS RETURNS FACING MAJOR TIME CRUNCH
NYT: “Mitch McConnell, the Senate majority leader, told his Republican colleagues that they needed to vote on their health bill before the July 4 holiday — then he gave them an extension. … The process could drag on past July, but there is tremendous pressure for Congress to act quickly. Republicans chose to pass their health bill through a special budget process called reconciliation, which has a lot of rules. That choice has advantages — most important, it allows Republicans to avoid a filibuster and pass the legislation with 50 Senate votes (and a tiebreaking vote from Vice President Mike Pence), without any of the Democrats. But it also means that the health bill impedes other priorities. Leaders want to use the same budget procedure to pass tax reform, but Senate rules allow only one such reconciliation maneuver at a time. That means that, as long as health care drags on, tax reform can’t move forward, unless Republicans can attract Democratic support under normal procedure (where 60 votes is needed for a filibuster-proof majority).”

Senators still aren’t agreeing - NY Mag: “At least ten Republican senators are thought to be ‘no’ votes on the Better Care Reconciliation Act of 2017, and the number could rise after the lawmakers reflect on the sour public assessments of the bill they heard back home and read about in the media over the recess. Senators John McCain of Arizona and Bill Cassidy of Louisiana offered negative assessments of BCRA’s chances of enactment on Sunday shows. Senators Chuck Grassley and Ted Cruz — of Iowa and Texas — are sniping at each other over the latter’s proposed amendment to let insurers offer cheaper health plans with less coverage and its impact on people with preexisting conditions. Worse yet from a morale point of view, Republicans are now openly sparring over what to do if BCRA fails.”

The reality of the Cruz-Lee amendment - National Review: “While the text of the [Ted Cruz]-[Mike Lee] proposal is not available, the reasons the senators are pushing it seem clear enough from news stories. … The implication is that insurers could charge whatever premiums they wanted for their non-compliant plans. In particular, this would mean healthy consumers could buy policies with premiums adjusted based on their lower risk of needing expensive care. An amendment of this kind would have the predictable effect of segmenting the individual insurance market. Insurers would sell low-premium plans to healthy consumers outside of the ACA’s exchanges. The non-compliant plans would likely omit coverage for expensive benefits such as mental-health coverage, and might even limit the total amount of the insurance benefit either annually or over a lifetime.”

GOP faces critical month for budget - The Hill: “Congress has just three legislative weeks before the August recess and one month after that before an impending government shutdown and debt ceiling breach … neither the House nor the Senate’s budget committees have unveiled their budgets, which set the spending levels for the next fiscal year. The problem is division within the Republican caucus, which is being pulled in opposing directions by defense hawks, deficit hawks and moderates. The House Budget Committee, which has twice delayed marking up its resolution, had agreed on spending $621 billion on defense and $511 billion on other areas. Both totals were higher than Trump’s proposed caps of $603 billion for defense and $462 billion for nondefense.”

Freedom Caucus plan for the debt ceiling - Axios: “One conservative group that will announce a set of demands for the debt ceiling is the House Freedom Caucus. Sources tell [Jonathan Swan] Mark Meadows and his group of some 40 members will call on Republican leadership to pass a bill in July to deal with the debt ceiling and avoid a last-minute stand-off in October. … Democrats are very unlikely to support the Freedom Caucus' first plan, meaning there's no path to 60 votes in the Senate. Also, a number of Treasury officials, past and present, believe asset sales are not a viable way to avoid or delay raising the debt limit.”

THE RULEBOOK: THICK SKIN
“There is scarcely anything that can wound the pride or degrade the character of an independent nation which we do not experience.” – Alexander Hamilton, Federalist No. 15

TIME OUT: REVIVING THE PAST
NatGeo: “Jurassic Park imagined a future in which it was possible to bring dinosaurs back to life. Now, that fiction may become reality as geneticists seek to resurrect the woolly mammoth. … The shaggy animals went extinct about 4,000 years ago, but the current revolution in genetics — which is combating aging, eradicating diseases, and even allowing parents to create ‘designer babies’ — may change that. In his new book, Woolly: The True Story Of The Quest To Revive One Of History’s Most Iconic Extinct Species, Ben Mezrich goes from the laboratory to the Siberian steppe as scientists explore the possibilities of reviving the woolly mammoth to its native lands—and possibly, threatened ecosystems along with it. … ‘The stuff [Michael Crichton] was doing in Jurassic Park is now scientifically possible. … It allows us to place individual genes that code for specific characteristics into the genome of living creatures. That’s what’s happening in the Woolly Mammoth Project. It used to be that we were reading DNA. Now we are at the point where we can write it,’ [Mezrich said.]”

TWIST IN THE COMEY CASE
The Hill: “More than half of the memos former FBI Director James Comey wrote as personal recollections of his conversations with President Trump about the Russia investigation have been determined to contain classified information, according to interviews with officials familiar with the documents. …when the seven memos Comey wrote regarding his nine conversations with Trump about Russia earlier this year were shown to Congress in recent days, the FBI claimed all were, in fact, deemed to be government documents. While the Comey memos have been previously reported, this is the first time there has been a number connected to the amount of memos the ex-FBI chief wrote. Four of the memos had markings making clear they contained information classified at the secret or confidential level, according to officials directly familiar with the matter. A spokesman for the FBI on Sunday declined to comment.”

RUSSIA MEETINGS, THEN AND NOW
Trump son met with Russian lawyer who allegedly offered Hillary dirt - WaPo: “Donald Trump Jr., the president’s son, said in a statement Sunday that a Russian lawyer with whom he met in June 2016 claimed she could provide potentially damaging information about his father’s likely Democratic opponent, Hillary Clinton. He said he had agreed to the meeting at Trump Tower in New York because he was offered information that would be helpful to the campaign of his father, then the presumptive GOP presidential nominee. At the meeting, which also included the candidate’s son-in-law, Jared Kushner, and then-campaign chairman, Paul Manafort, the Russian lawyer opened by saying she knew about Russians funding the Democratic National Committee and Clinton, the statement said. … Donald Jr. said that his father ‘knew nothing of the meeting or these events’ and that the campaign had no further contact with the woman after the 20- to 30-minute session.”

Kremlin denies the meeting - AP: “The Kremlin, meanwhile, is disavowing knowledge of the Russian lawyer, or any meeting between Trump senior staff and the woman. The meeting with Kremlin-linked lawyer Natalia Veselnitskaya is the earliest known private meeting between key aides to the president and a Russian. Federal and congressional investigators are probing whether Trump's campaign coordinated with Russia to meddle in the presidential election, investigations the president has called a ‘hoax.’”

Trump tweets about G-20 interactions with Putin - WashTimes: “On his first day back in the White House on Sunday, Mr. Trump felt compelled to respond to his critics. In six Twitter posts, the president defended his performance in his first face-to-face meeting with Mr. [Vladimir Putin] … ‘I strongly pressed President Putin twice about Russian meddling in our election. He vehemently denied it. I’ve already given my opinion,’ Mr. Trump tweeted. ‘We negotiated a cease-fire in parts of Syria which will save lives. Now it is time to move forward in working constructively with Russia!’

‘Putin looked Trump in the eye and lied to him’ - Former U.S. Ambassador to the UN, John Bolton writing for the Daily Telegraph: “Before Donald Trump’s meeting with Vladimir Putin at the G20, media speculation approached hysterical levels. Would it be like the Reagan-Gorbachev get-together at Reykjavik in 1986, or Chamberlain meeting Hitler in Munich in 1938?  Of course, it was like neither. Instead, the encounter was primarily for the leaders to take each other’s measure.”

B-I-N-G-NO!
WHEC: “A new state law changing the minimum age for bingo players is now in effect. As of Sunday, you must be 18-years-old to play bingo. Previously, there was no age for playing, you just had to be with an adult. The State Gaming Association says the law was updated to bring the minimum age for bingo in line with other forms of legal gambling. ‘Grandparents that are regular customers, especially during the summer months, they do bring grandkids and younger teenagers in and they do play,’ says Bob Gabbey of the Lancaster Knights of Columbus, ‘With this new law coming into effect, that's going to severely impact our clientele.’ Kids younger than 18 still can go to bingo games, but they cannot play.”