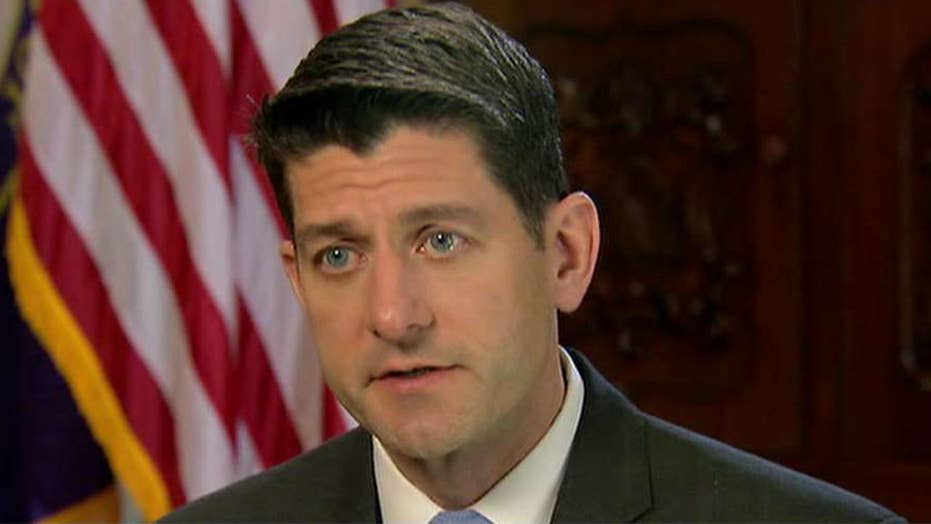 Speaker of the House says we have been doing a disservice to the U.S. military, says he has received assurances that Special Counsel Robert Mueller will not be fired.

The massive, $1.3 trillion spending bill capped off a busy few months for Congress, highlighted by tax cuts for Americans and additional money for the military. However, Congress did not make much progress on such voter concerns as immigration reform and gun safety -- with hundreds of lawmakers now focusing on re-election in November.

All 435 House seats are up for re-election in 2018, with Democrats optimistic about controlling the chamber for the first time in roughly nine years.

They would need to gain at least 24 seats, a likely possibility for the party that doesn’t control the White House in so-called "mid-term" elections.

In addition, Democrats until recently were almost singularly focused on Southern California, where changing demographics could lead to them winning a handful of GOP-held seats.

But now, Pennsylvania -- bolstered by Democrat Conor Lamb’s victory earlier this month in a southwestern district Trump won by nearly 20 points -- appears to have opened up more possibilities.

Still, a Fox News poll released Sunday shows Democrats’ 2018 congressional lead slipping, based on voters being asked in recent months whether they'd prefer a congressional Democratic or Republican candidate in November. Democrats now have a 5-point lead, compared to 50-to-35 percent lead in October, in the so-called generic ballot test.

"Data from 2012 and 2014 show the Democrats need an edge of at least 5 points to bring the majority into play," Shaw said. "Just winning the popular national vote is not enough to flip the House."

Said Anderson: "I like this question as a gauge of perceptions month to month. But its predictive power seven months from the election is dubious."

Democrats argued after the Lamb win that Washington Republicans have abandoned the tax-cut pitch because it fails to resonate with voters, or is mere “crumbs,” as House Democratic leader Nancy Pelosi said after the cuts were passed in late-December 2017.

However, the GOP appeared to focus more on appealing to voters in the Pennsylvania district by touting Trump’s more recent tariffs on steel and aluminum, and they continue to say the cuts remain a big part of the 2018 platform.

"It's very clear that tax reform was going to be the biggest legislative crown jewel of this Congress. That is a massive centerpiece of our campaign,” said Matt Gorman, spokesman for the National Republican Congressional Committee, whose goal is to get GOP candidates elected and re-elected to the chamber.

But polls swing wildly these days, strategists say. Voters are rarely focused for too long on single issues that could make or break campaigns, as when Republicans seized control of the House in 2010 amid the slow economic recovery or Democrats pushed to the majority in 2006 over opposition to the Iraq and Afghanistan wars and congressional ethics scandals.

The GOP-controlled Congress, before leaving for a two-week recess, passed some measures on gun safety in the aftermath of the Feb. 14 mass shooting at the Marjory Stoneman Douglas High School in Parkland, Fla., in which 17 people were killed.

Lawmakers took modest steps to increase school-safety funds and strengthen the National Instant Criminal Background Check System. However, they did not pass any legislation to limit gun sales, nor did they approve measures to ban the sale of so-called “bump stocks,” which essentially enable semi-automatic rifles to fire bullets rapidly.

Another Fox News poll Sunday suggests voters want lawmakers to do something to prevent gun violence.

The poll found voters, by a 53-to-40 percent margin, consider protecting against gun violence more important than protecting gun rights.

And the large-scale marches in Washington and other major cities Saturday -- the student-led “March for Our Lives” events -- suggested voters would hold incumbents and challengers accountable this year on what they would do to curb gun violence in schools and elsewhere across the country.

Kris Brown, co-president of the Brady Campaign to Prevent Gun Violence, said the measures passed in Congress are "just not enough."

"The American people have been screaming from the rooftops for real, bold change to fight against" tragedies such as the Florida and Las Vegas shootings, Brown said. "We have seen the consequences of Congress's inaction."

Democrats tried and failed in recent weeks to pass legislation to create a permanent fix for the Obama-era Deferred Action for Childhood Arrivals, which protects from deportation an estimated 800,000 immigrants brought to the U.S. illegally as children.

Democratic Senate leader Chuck Schumer effectively shut down the government over the issue by withholding Democratic votes in January to pass a spending bill, only to relent three days later without a deal.

Even Trump appeared upset that the new spending bill had no DACA fix.

At the White House on Friday, he toyed with a veto of the budget package, complaining it lacked his immigration deal and smacked of overspending, before ultimately signing it.

“Remember DACA, the Democrats abandoned you (but we will not)!” he tweeted Sunday.

Congress' spring agenda is thin. It includes modest plans to finish a banking bill that rolls back some of the regulations put in place after the financial crisis, and to pass a big farm bill that sets agriculture and school nutrition policies. The Senate also has to start confirmation hearings for Trump's nominees for secretary of state and CIA director.

Strategists say it will be up to Republican candidates to make the case that the GOP's signature legislative accomplishment is worth their re-election.

Pennsylvania is emerging as a source of hope for Democrats in their quest to take control of the House for several reasons.

In addition, the state Supreme Court, ruling in a gerrymandering lawsuit, junked Pennsylvania's 6-year-old district boundaries that were drawn by Republicans to get Republicans elected. The court's Democratic majority redrew the boundaries, improving Democrats' chances in five districts in particular.