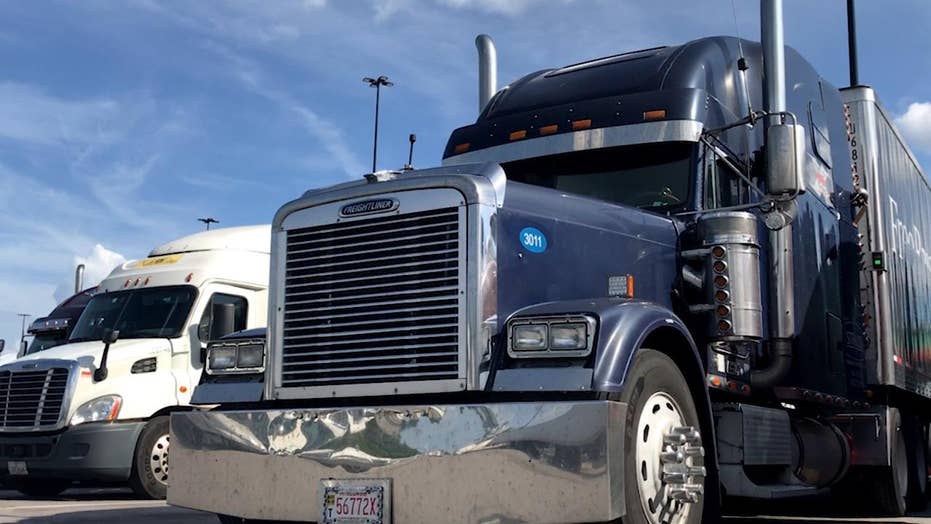 DRIVE-Safe Act will allow teens to drive across state lines

As a shortage in truck drivers continues to grow, Congress considers a proposal called the DRIVE-SAFE Act that will allow teenagers to drive commercial vehicles across state lines

When Juwan Mack turned 21, one of the first things he did was carry out his dream. The South Carolina resident applied for, and received, his trucking license.

“I remember as a kid always being at my grandma’s house. Her house was right next to a main highway,” Mack said. “So, I remember being on the side of the road and a truck would come by and I would pull my hand down for them to beep the horn…childhood dreams.”

But Mack, now a truck driver for CCC Transportation, had to wait years for that dream to become a reality, thanks to a law that requires drivers of commercial vehicles to be over 21 to cross state lines.

Now, Congress is considering a new piece of legislation proposed by Rep. Duncan Hunter, R-Calif., called the Developing Responsible Individuals for a Vibrant Economy Act, also known as the DRIVE-Safe Act. It aims to allow 18 year olds with their commercial driver’s licenses, or CDLs, the ability to drive commercial vehicles across state lines in an attempt to help prevent a nationwide driver shortage.

Most states allow truck drivers under 21 to crisscross a state, but those 18 to 20 are not allowed to cross state lines.

Many truckers are reaching retirement age in the next decade and leaving the workforce, and companies say they are having a tough time hiring new drivers. In South Carolina alone, more than 8,200 locally owned trucking companies said they were suffering from a driver shortage.

Mack feels the legislation, which is currently being reviewed by the House committee, is important and will help bring a younger crowd of drivers to the industry. (Fox News)

The American Trucking Association published a report in October of 2017 showing that last year’s national shortage of 50,000 drivers may increase to 174,000 drivers by 2026.

“The truckers would need to hire close to one million truckers over the next 10 years. You have a lot of people retiring,” Hunter said.

Supporters say lowering the age limit would expand the labor pool. While the pay is decent – the average trucker’s salary is about $60,000 a year – it’s a tough job that requires drivers to be on the road for months at a time.

“It’s such a crisis with the shortage of truck drivers – you can ask any business person, any fleet operator, any private business that has their own fleet one of their biggest problems is workforce, in particularly truck drivers,” said Rick Todd, president of the South Carolina Trucking Association.

The apprenticeship program would require the drivers under 21 years old to complete, at minimum, 400 hours of on-duty time, including at least 240 hours of driving time chaperoned by an experienced driver and equip all training trucks with cameras and a set a speed cap of 65 mph.

The U.S. Department of Transportation set the rule decades ago because of concerns that drivers under 21 had a higher risk for accidents.

Now, the proposal has come under criticism by some who agree with the DOT, arguing that allowing younger drivers behind the wheel of a truck is a recipe for disaster.

“Young drivers both lack overall experience and are less safe behind the wheel than their older counterpart,” Todd Spencer, president of the Owner-Operator Independent Drivers Association, wrote in a letter to the House Committee on Transportation and Infrastructure, which is exploring the issue. “In fact, commercial motor vehicle (CMV) drivers who are 19 to 20 years of age are six times more likely to be involved in fatal crashes.”

The apprenticeship program would require the drivers under 21 years old to complete, at minimum, 400 hours of on-duty time, at least 240 hours of driving time chaperoned by an experienced driver and equip all training trucks with cameras, a speed governor set at 65 mph and active braking collision mitigation systems. (Fox News)

The association believes all efforts should instead focus on improving the industry instead of trying to hire more cheap labor.

“This has been tried before and no one with any common sense thought it was a good idea,” Spencer wrote in the letter. “Nothing has changed since that time and no disruptions have ever taken place due to any perceived shortage of drivers. These latest efforts are just more ways to keep driver-churn going and keep wages as low as possible.”

But Hunter said the change is necessary because the trucking industry keeps America going by delivering goods, ranging from fresh vegetables to petroleum, around the country – and costs will go up on goods and the availability of those goods will go down if the issue isn’t addressed.

“There is no downside to doing this because you already have people on the road that are in the ages of 18 to 21. They went through all of the training, all the safety stuff. So they’re already doing it, they just simply can’t drive over the state line,” Hunter said. “So, I think this fixes a dumb issue that Congress needs to fix.”

“…about half of our driver population is 52 years of age or older, which means they are going to be retiring in droves here soon. But yet, less than half of one percent are younger than 21,” President of the South Carolina Trucking Association Rick Todd said. (Fox News)

Mack feels the legislation is important and will help the industry bring in younger drivers.

“I feel like a lot of kids that are underage will jump into it because there is no longer a wait,” Mack said, “you know, no limitation on where you can go or how far you can drive.”