In yet another bizarre turn of events at Brett Kavanaugh’s Supreme Court confirmation hearing, Republicans have revealed that documents Democratic Sen. Cory Booker published Thursday morning in supposed defiance of Senate rules had already been cleared for release.

“All of this drama this morning apparently was for nothing and it’s unfortunate,” Sen. John Cornyn, R-Texas, told reporters after a chaotic start to the third day of Kavanaugh’s hearing.

Earlier Thursday, Booker dramatically said he would “knowingly” violate Senate rules to release emails marked "committee confidential" that showed Kavanaugh discussing racial profiling as a White House lawyer in 2002. Booker referred to his actions as an act of “civil disobedience” and said he was prepared to face punishment.

“I am going to release the e-mail about racial profiling and I understand that the penalty comes with potential ousting from the Senate,” said Booker, a possible 2020 Democratic candidate for president.

At another point, Booker said, “This is about the closest I'll probably ever have in my life to an, ‘I am Spartacus’ moment.”

But it turns out, Booker didn’t actually break any rules with that release. The Republicans on the Judiciary Committee said they worked with the George W. Bush library and the Justice Department overnight to clear the emails. The restrictions were waived early Thursday morning. 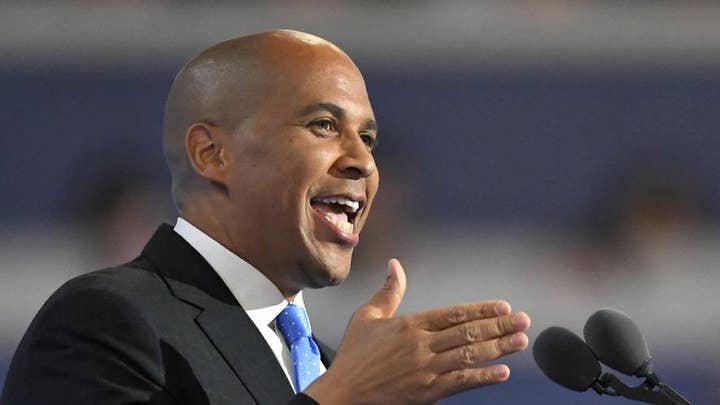 "Apparently, some just wanted to break the rules and make a scene, but didn’t check their email," a spokesman for committee Republicans said in a statement. The committee posted the same documents.

A spokeswoman for Booker said the lawmaker and Senate Democrats “were able to shame the committee into agreeing to make last night’s documents publicly available.” But she did not address when Booker first learned the materials had been cleared.

Later Thursday, speaking to Fox News, Booker still insisted he violated the rules of the Senate.

“I released the documents last night by reading from them in violation of the Senate rules,” he said.

Further, he posted even more emails via Twitter later Thursday afternoon which may have been designated "confidential."

The emails related to Kavanaugh's comments on racial profiling appeared to be cleared in part because of the involvement of Utah GOP Sen. Mike Lee.

“I’ve said it before and I’ll say it again: I will happily work with any of my colleagues from across the aisle to go through the necessary steps and processes to try and get specific classified documents released to the public,” Lee tweeted.

Booker released 12 pages of emails – which had been marked “committee confidential” – online for the public to read. The emails included internal post-9/11 discussions surrounding issues of racial profiling.

In a 2002 email, Kavanaugh, who was working as a lawyer in the Bush White House, said he “generally” favored race-neutral security measures, but said they need to “grapple” with the “interim question of what to do before a truly effective and comprehensive race-neutral system is developed and implemented.”

Kavanaugh wrote that the “interim question” is of “critical importance to the security of the airlines and American people in the next 6 months or so, especially given Al Qaeda’s track record of timing between terrorist incidents.”

The episode began a day earlier when Booker first implied Kavanaugh had been open to racial profiling tactics, citing the email exchange between Kavanaugh and a colleague.

However, Booker at the time did not provide Kavanaugh a copy of the emails to review while questioning him about it, prompting an objection from Lee, who charged that it was inappropriate to “cross-examine” Kavanaugh about documents that he “can’t see.”

The emails had been marked "committee confidential." But Booker said Thursday he would release them anyway, saying the document is a “great illustration of the absurdity of the process” because there’s nothing in it that’s “national security-related.”

Top Republicans mocked and denounced Booker for the move.

“Running for president is no excuse for violating the rules of the Senate or of confidentiality of the documents that we are privy to,” Cornyn told Booker, before he was informed there was no violation.

“Can I ask you how long you’re going to say the same thing three or four times?” Grassley asked.

“I’m saying I’m knowingly violating the rules,” Booker replied. “Senator Cornyn has called me out for it.”

“How many times are you going to tell us that?” Grassley replied.

Cornyn, at one point, read the Senate rule that said senators who disclose confidential business could suffer expulsion from the body.

A number of Democrats, including Illinois Sen. Dick Durbin and Minnesota Sen. Amy Klobuchar, threw their support behind Booker’s move.

“I completely agree with you. I concur with what you are doing…So if there is going to be some retribution against the senator from New Jersey, count me in,” Durbin said.

“We support what Sen. Booker is doing here,” Klobuchar said. 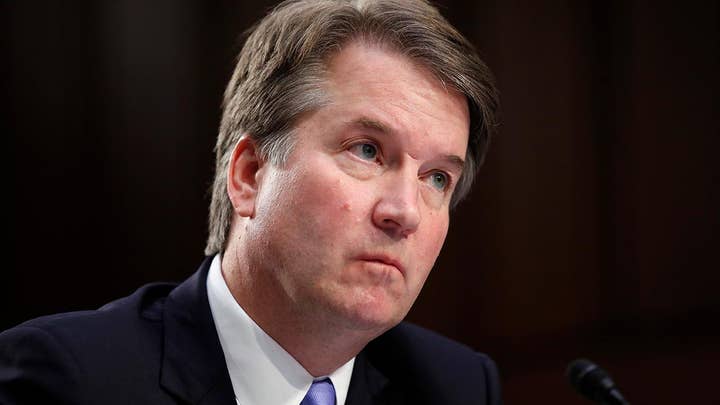 Meanwhile, outbursts from protesters continued to interrupt the proceedings, as they have all week.

“Confirmation hearings are supposed to be an opportunity for the American people to hear from the nominee," Sen. Orrin Hatch, R-Utah, said. "Unfortunately, it seems that some on the political left have decided to try to turn this hearing into a circus.”

It came as Kavanaugh entered the final stretch of questioning in his confirmation hearing Thursday with Democrats springing a series of cryptic questions – in an apparent attempt to box the nominee into an embarrassing admission or at least throw him off what has been a relatively steady performance.

Under questioning, Kavanaugh denied that he once suggested the 1973 Roe v. Wade ruling on abortion rights is not settled law. Kavanaugh has repeatedly described the abortion ruling as important Supreme Court precedent difficult to overturn.

Kavanaugh was asked about a 2003 email which was disclosed Thursday, where he wrote: "I am not sure that all legal scholars refer to Roe as the settled law of the land at the Supreme Court level since Court can always overrule its precedent, and three current Justices on the Court would do so."

Kavanaugh said he was not discussing his views, but rather "what legal scholars might say."

Other lines of questioning from Democrats have been more mysterious, suggesting an effort to lay a trap.

In an especially combative moment late Wednesday, Sen. Kamala Harris, D-Calif., asked Kavanaugh whether he ever had discussed Special Counsel Robert Mueller or his Russia probe with anyone at Kasowitz Benson Torres, the law firm founded by Marc Kasowitz, a former personal attorney to President Trump.

“I don’t recall any conversations of that kind with anyone at that law firm… I haven’t had any inappropriate conversations about that investigation with anyone,” Kavanaugh said Thursday, when given the chance to elaborate on Harris' question from a day earlier.

He added, “I’ve never given anyone any hints, forecasts, previews, winks, nothing about my view as a judge or how I would rule as a judge on that or anything related to that.”

For the most part, the hearings have focused on Kavanaugh’s writings and, in particular, key opinions he authored while serving on the nation’s most prestigious appellate court.

The confirmation hearing has been chaotic at times, with Democrats trying to delay the proceedings as they complain they haven’t received enough records from Kavanaugh’s past work.

Kavanaugh served for more than a decade on the D.C. Circuit Court of Appeals and, before that, for five years as a lawyer in the White House Counsel’s office in the George W. Bush administration. He also worked for independent counsel Ken Starr for three years during the probe that led to the impeachment of former President Bill Clinton.

Kavanaugh’s elevation from the D.C. Circuit Court of Appeals to the Supreme Court would mark a generational rightward shift on the Supreme Court, raising the stakes beyond those of last year’s nomination of Neil Gorsuch.

The judge’s nomination, though, will ultimately succeed or fail depending on a handful of swing-vote senators, including vulnerable red-state Democrats and moderate pro-choice Republicans who have all said that they would withhold judgment on the nominee.