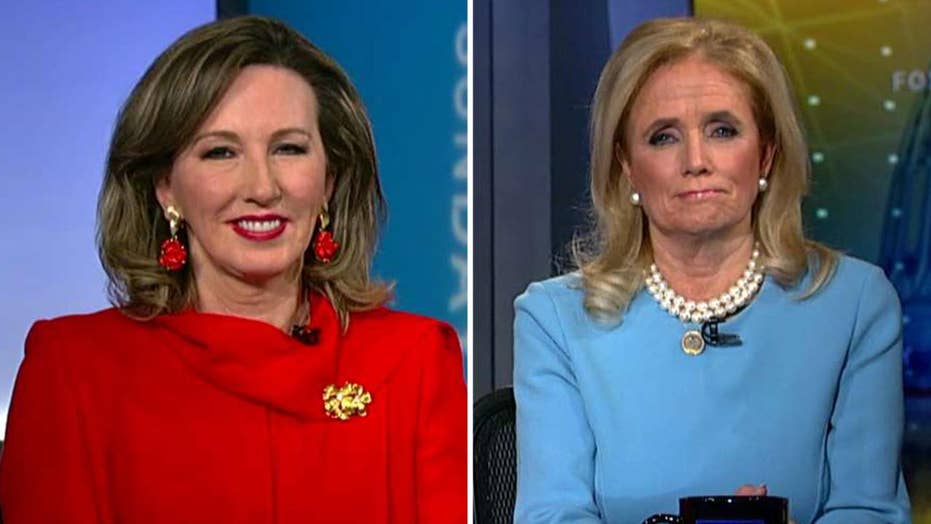 Reps. Comstock, Dingell on exposing harassment on the Hill

As allegations of sexual misconduct multiply in Washington, Republican Barbara Comstock and Democrat Debbie Dingell are leading the charge to change how harassment is reported in Congress.

“It doesn’t represent me,” Comstock told “Fox News Sunday” about Trump and the Republican National Committee in recent weeks backing Moore, who has a single-digit lead with Election Day on Tuesday.

The two-term congresswoman, among the most vulnerable House Republicans in next year’s congressional races, said Alabama voters will ultimately decide on whether Moore should serve in the Senate.

“But I think they're going to have an ethics investigation,” said Comstock, a member of the House Administration Committee, which is investigating the wave of sexual-harassment allegations that have engulfed Capitol Hill and other workplaces and high-profile industries across the country.

Just last week, two House members and one senator resigned amid such allegations, by women. And three other congressional members are under pressure to resign.

“I think the voters are going to hold everybody accountable, whether you're Republican or Democrat, when the 2018 campaign happens,” Rep. Debbie Dingell, D-Mich., said in joining Comstock on “Fox News Sunday.” “This has been probably one of the most difficult weeks of my career. This has been going on for a very long time. … We know what our values are. I don’t consider this a partisan issue.”

Moore leads Democratic rival Doug Jones by about 2 percentage points, according to the most recent RealClearPolitics' polls average.

Rep. Barbara Comstock, R-Va., said on Sunday that it bothers her that President Trump and the Republican National Committee (RNC) have thrown their support behind Alabama Senate candidate Roy Moore in the wake of numerous sexual misconduct allegations against him.

Fox News' Chris Wallace asked Comstock whether Trump and the RNC's support bothered her as a Republican woman on "Fox News Sunday."

"Yes, I mean it doesn't represent me. I don't think it represents most of the Republican women, as well, as my colleagues like Sen. Tim Scott, R-S.C., and Sen. Cory Gardner, R-Colo., have made clear," Comstock said.

“The voters are going to decide on Tuesday, but I think they're going to have an ethics investigation and what we've been doing on my committee is that we've been hearing the voices of the women and the victims, and that is what is going to happen because every woman has a story. Jeff Sessions said he believed these women, and I think if Roy Moore doesn't underperform like he has in the past, then he'll be facing the ethics committee," she said.

Allegations of sexual misconduct against minors have plagued Moore for the past month of the race. However, Trump has endorsed the candidate, urging people to get out and vote for him at a rally on Friday.

The RNC also reinstated its support earlier this month, after pulling back in the wake of the allegations.