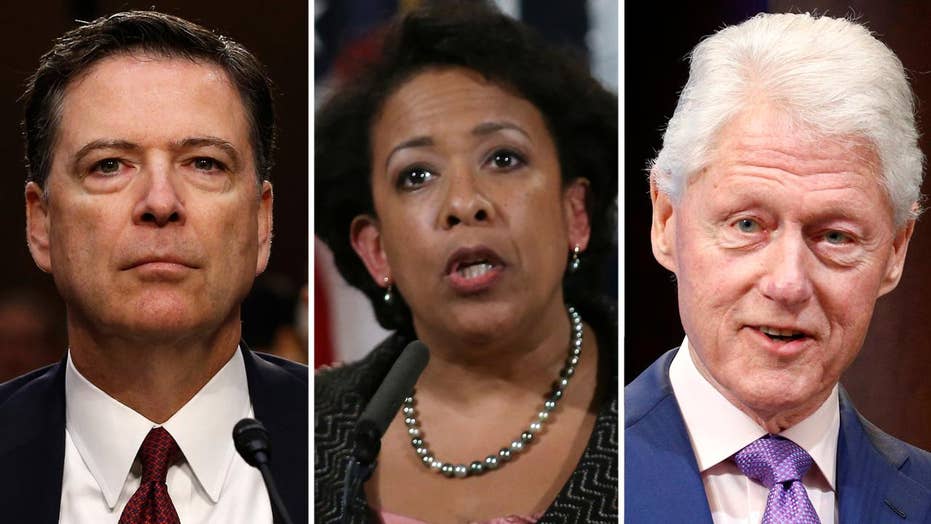 Former FBI Director James Comey revealed in Senate testimony Thursday that then-Attorney General Loretta Lynch directed him to describe the Hillary Clinton email probe as a "matter" and not an "investigation."

He also said that the directive, combined with Lynch's unusual Arizona tarmac meeting with former President Bill Clinton, led him to make his independent announcement regarding the Clinton email probe last July.

In his closely watched Senate Intelligence Committee testimony otherwise devoted to discussing the circumstances of his firing, Comey said that tarmac meeting was a "deciding factor" in his decision to act alone to update the public on the Clinton probe -- and protect the bureau's reputation.

"There were other things, significant items," he added, citing how "the Attorney General directed me not to call it an investigation and call it a matter—which confused me."

“That was one of the bricks in the load that I needed to step away from the department,” Comey said, later adding he was concerned Lynch was trying to align the DOJ’s comments with the way the campaign was talking about the probe. “That gave me a queasy feeling,” he said.

“Yes, that was the thing that capped it for me,” Comey said. “I needed to protect the investigation and the FBI.”

Comey added: “There were other things that contributed to that one thing ... but the committee has been briefed on classified facts.”

But Comey told lawmakers he wouldn’t have done things differently with regard to his decision on the Clinton email case.

“You have been criticized on your Clinton email decision. Did you learn anything that would have changed how you chose to inform the American people?” Chairman of Senate Intelligence Committee Richard Burr, R-N.C., asked the fired FBI director.

“Honestly, no,” Comey answered. “It caused a lot of personal pain for me – I think it was the best way to protect the justice institution—including the FBI.”