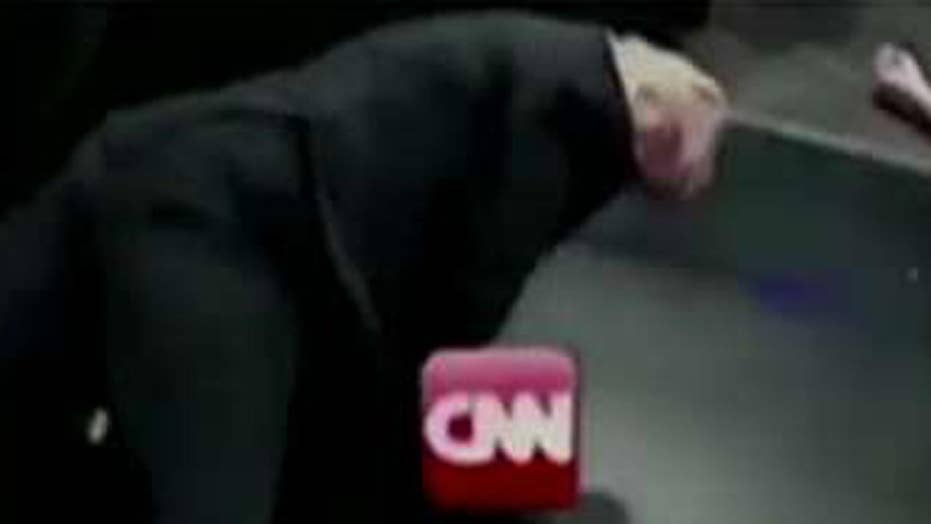 CNN was facing almost universal backlash on Wednesday after running an article on the Reddit user who made an anti-CNN, wrestling-themed GIF tweeted by President Trump over the weekend – and seeming to imply the network would reveal the person’s identity if he reneged on an apology.

Andrew Kaczynski, the senior editor and founding member of the cable network's KFile investigative team, tweeted several defenses of the article, saying parts were “being misinterpreted.” But #CNNBlackmail was a top trend on Twitter Wednesday morning, as numerous media figures spoke out against the move.

Texas GOP Sen. Ted Cruz even suggested on Twitter that CNN could have a legal problem.

“Troubling. I assume CNN's lawyers are examining GA § 16-8-16 Theft by extortion. If CNN constructively obtained the gif-maker's IP...it's a GA crime if they threatened to ‘Disseminate any information tending to subject any person to hatred, contempt, or ridicule....’” he wrote.

The Reddit user was behind the controversial GIF that Trump tweeted out Sunday -- and that showed Trump wrestling an opponent (from his pre-politician days) with a CNN logo plastered over his face. The KFile group found the creator -- user name “HanA**holeSolo” -- by comparing information posted on Reddit to Facebook profiles. While CNN decided against publishing the user's real name, the network appeared to attach a caveat to that decision.

“CNN is not publishing ‘HanA**holeSolo’s’ name because he is a private citizen who has issued an extensive statement of apology, showed his remorse by saying he has taken down all his offending posts, and because he said he is not going to repeat this ugly behavior on social media again,” the article stated. “…CNN reserves the right to publish his identity should any of that change.”

Further, CNN’s initial Tuesday tweet about the article implied the Reddit user only apologized once he was contacted by the KFile.

CNN has adamantly defended its handling of the story, issuing a statement Wednesday saying the network did not publish the user’s name out of concern for his safety – and calling any assertion that the network blackmailed him “false.”

In the reported statement, CNN said the team published the line in question to be “transparent that there was no deal.”

“The line is being misinterpreted. It was intended only to mean we made no agreement w/the man about his identity,” he wrote, adding at one point: “CNN specifically chose not to reveal this guy’s identity and to say we threatened anyone is a total lie.”

Kaczynski also said the Reddit user had been made aware of the ongoing Internet kerfuffle and had gotten in touch with him again.

“FYI ‘HanA**holeSolo’ just called me. ‘I am in total agreement with your statement. I was not threatened in any way,’" Kaczynski wrote.

Kaczynski initially said the user “posted his apology before we *ever* spoke” to him, calling KFile afterwards to apologize again. But after further questions, Kaczynski said the initial apology didn’t come until CNN had contacted the user and asked to talk to him.

He also justified his article by noting a previous instance of the Reddit user’s work, which was anti-Semitic: “This was someone who shared an image of CNN reporters’ face with Stars of David next them.”

Many were shocked by the perceived threat of “doxing” – publicly sharing private details about a person.

German Lopez, a reporter for left-leaning Vox, tweeted: “I can’t emphasize how bad this is on CNN’s part. This is basically ‘don’t post stuff we don’t like or we’ll dox you.’ Extremely unethical.”

WikiLeaks tweeted, "Trump was bad. CNN is worse: CNN threatens amateur satirist behind Trump video: make fun of us again and we dox you."

Nationally syndicated radio host Dana Loesch wrote: "The optics of going after people on Independence Day simply for making memes. And some wonder why people are frustrated with media."

Since the CNN article was published, many social media users also have created dozens of other GIFs of Trump bashing, brawling and scuffling with a humanoid CNN logo.

The original anti-CNN wrestling GIF was made infamous after Trump tweeted it -- an act which brought its own consequences, as Trump faced bipartisan political condemnation.

That video followed a rough week for CNN, which was recently forced to retract one of its Russia collusion stories -- a development that resulted in the resignation of three of the network's journalists.