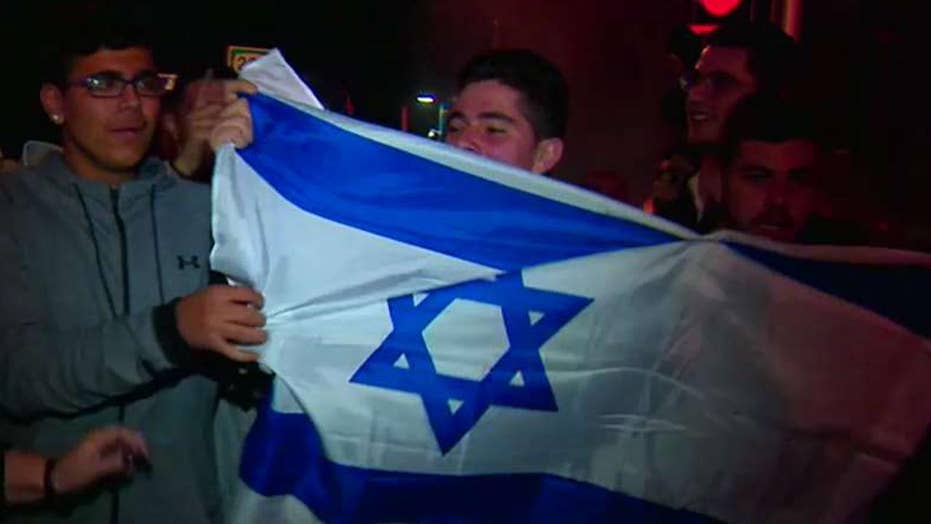 Anger in Israel after cease-fire reached with Hamas

Palestinian militant groups announce they've agreed to a cease-fire with Israel to stop the heaviest fighting between them in years; Benjamin Hall reports from Sderot, Israel.

A CNN commentator lambasted Israel in a U.N. speech that drew applause from diplomats on Wednesday, while calling for a "free Palestine from the river to the sea" -- language critics describe as a dog whistle advocating the elimination of Israel.

In the remarks, in which he accused the Israeli government of “normalizing settler colonialism,” Hill drew a comparison to the civil rights movement in America and suggested violence could be a tool for Palestinian activists.

“If we are standing in solidarity with the Palestinian people, we must recognize the right of an occupied people to defend itself. We must prioritize peace, but we must not romanticize or fetishize it,” he said. “We must advocate and promote nonviolence at every opportunity, but we cannot endorse a narrow politics of respectability that shames Palestinians for resisting, for refusing to do nothing in the face of state violence and ethnic cleansing."

At one point, he poured himself some water and told participants that he just got off a flight from “Palestine” and that “I was boycotting the Israeli water so I was unable to quench my thirst.”

He finished his speech by saying that "justice requires a free Palestine from the river to the sea." The remark was applauded by participants in the chamber.

In response, Israel Ambassador to the U.N. Danny Danon told Fox News: “It is unfortunate to see the forces of hatred and rejection co-opt and seduce news commentators into believing their lies and false narratives."

Commentators accused Hill of employing a phrase used by groups like Hamas that call for the destruction of Israel.

“Those calling for ‘from the river to the sea’ are calling for an end to the State of Israel," Sharon Nazarian, the Anti-Defamation League’s senior vice president for international affairs, wrote to the Jewish Journal. “It is a shame that once again, this annual event at the United Nations does not promote constructive pathways to ‘Palestinian solidarity’ and a future of peace, but instead divisive and destructive action against Israel.”

Washington Examiner commentator Seth Mandel said that it was more than a dog whistle, and accused Hill of going “full Farrakhan,” referring to radical Nation of Islam leader Louis Farrakhan, who has a history of anti-Semitic comments.

Hill responded on Twitter to claims he was alluding to a Hamas rallying cry by saying he did not endorse, support, or mention Hamas.

“'River to the sea' is a phrase that precedes Hamas by more than 50 years. It also has a variety of meanings,” he tweeted.

The U.S. and Israel regularly accuse the U.N. of harboring an anti-Israel bias and encouraging anti-Israeli speakers. Tuesday's meeting was hardly a fringe meeting, with the participants including Secretary General Antonio Guterres and General Assembly President María Fernanda Espinosa Garcés.

Anne Bayefsky, director of the Touro Institute on Human Rights and the Holocaust and President of Human Rights Voices, told Fox News that Hill’s speech was an "especially obscene U.N. moment that reveals the true nature of the anti-Israel and anti-Jewish animus of the modern United Nations."

“Hill's call at the United Nations for the destruction of the Jewish state was not some accident. He didn't misspeak. He was an invited guest. He was the only person invited to speak as 'the' representative of 'civil society.' When he ended his extraordinary tirade with 'Give us a free Palestine from the river to the sea' his words were met by a round of applause. The only applause for any speaker," she said.