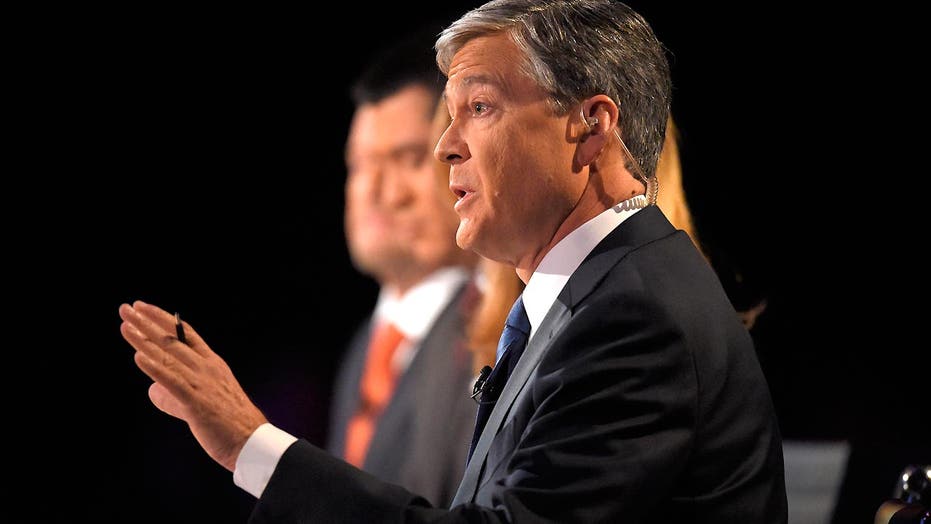 How GOP debate became more about the moderators and media

Analysts across the political spectrum may be at odds over who won the third Republican presidential debate, but they seem to agree on one thing: the CNBC moderators had a very bad night.

The negative reaction to the debate questions and other factors has become a story unto itself, almost overshadowing the actual policy debates that broke out in between the candidate-moderator rancor Wednesday night.

The Republican candidates and observers complained the questions were demeaning, silly, and designed to provoke confrontation rather than genuine policy discussion. Others took aim at the debate format, and wondered about  the moderators’ professionalism.

On several sites aggregating Twitter reaction, the moderators were declared the losers, “hands down.”

“The moderators had a worse night than the New York Mets … this was a trainwreck,” Fox News' Howard Kurtz charged Thursday, referring to Game 2 of the World Series, and calling the debate questions “condescending, snide, hostile and borderline insulting.”

While it might not have hurt CNBC during the broadcast -- the network touted 14 million viewers the following day, a network record -- it got a drubbing from candidates and party leaders during and after the prime-time event.

"While I was proud of our candidates and the way they handled tonight’s debate, the performance by the CNBC moderators was extremely disappointing and did a disservice to their network, our candidates, and voters,” RNC Chairman Reince Priebus said in a statement, calling the questioning “deeply unfortunate.”

CNBC’s John Harwood was blasted for asking Donald Trump whether he was running a "comic book" campaign, and asking Mike Huckabee if he thought Trump had “the moral authority” to be president -- a question Trump called "nasty." Moderator Carl Quintanilla later called Marco Rubio a “young man in a hurry” in reference to his age and his experience in the Senate.

Huckabee, the former Arkansas governor, told Fox News Thursday morning that “it was very frustrating to be on stage.” He faulted the moderators for not sticking to the issues and promises to divvy time equally. “They lost control of the debate,” he said.

At varying times, the audience booed the moderators, giving the candidates space to draw together for the attack against what they said was their common enemy: the liberal media.

The criticism took off after Texas Sen. Ted Cruz was asked whether his opposition to raising the debt ceiling indicates he may not be the “the kind of problem-solver American voters want.” Cruz unloaded on the moderators, blasting them for asking questions like, “Donald Trump, are you a comic-book villain? Ben Carson, can you do math? John Kasich, will you insult two people over here? Marco Rubio, why don’t you resign? Jeb Bush, why have your numbers fallen?” After the cheers for Cruz died down he suggested the moderators were Democrats.

“Nobody watching at home believes that any of the moderators has any intention of voting in a Republican primary,” he charged. Cruz used the debate to send out a fundraising letter to supporters afterward, “declaring war on the liberal media,” and went on to raise hundreds of thousands of dollars overnight. As for the focus groups following the debate, the candidates who took on the media and the moderators directly -- namely Cruz, Florida Sen. Marco Rubio and New Jersey Gov. Chris Christie -- seemed to benefit the most.

“It was brutal takedown, and CNBC’s smarmy moderators had it coming. Cruz is far from the first conservative to rail against liberal media bias, but he did it about as effectively as it can be done in 30 seconds,” said the Boston Globe’s Jeff Jacoby. “The clip of that moment will go viral.”

Even some in the entertainment world, like comedian Patton Oswalt, began agreeing with Cruz and others on stage by the end, in spite of their fundamental dislike for the GOP candidates.

Not everyone thought the moderators went too far. Some analysts argued the questions were par for the course for the debates. And Ohio Gov. John Kasich said he “thought they did a good job,” saying he was “very appreciative of how they did their job.” He felt he had time to speak and that it “wasn't a circus."

When asked over Twitter by The Blaze about the widespread criticism, Harwood said simply, "it comes with the job."