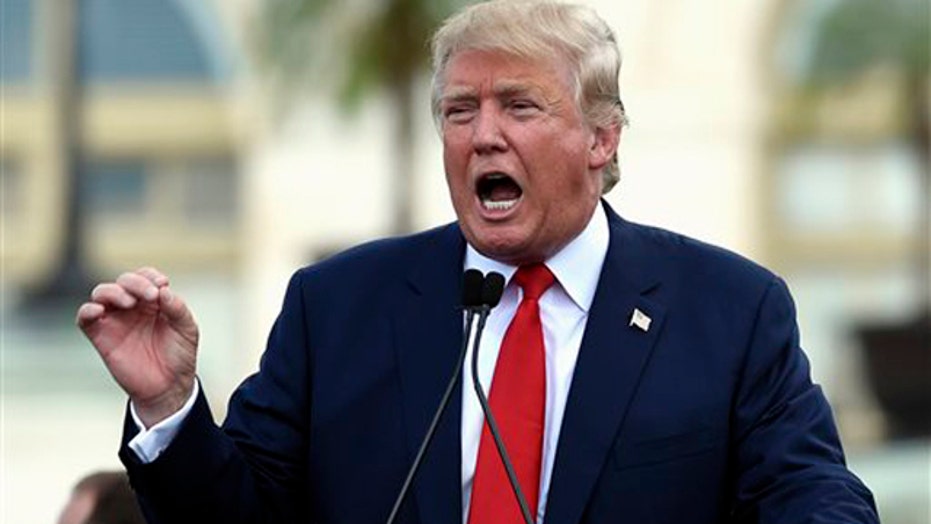 Trump's success in the polls gives Dems a reason to worry

Business mogul is in dead heat with Hillary Clinton; Doug McKelway digs into the poll numbers on 'Special Report'

Club for Growth President David McIntosh said the billionaire real-estate mogul and reality TV star would be "terrible on economic growth." He called Trump "the worst kind of politician," and the group's ad says he's playing voters "for chumps."

Trump has criticized the Washington-based Club for Growth as being bitter because he refused to give them a $1 million contribution.

For now, the Washington-based group is going it alone.

Far larger pro-Republican operations -- including the Koch brothers-led Americans for Prosperity, GOP strategist Karl Rove's Crossroads groups and the U.S. Chamber of Commerce -- said they have no immediate plans to spend money trying to swat down Trump, who has in the past has identified himself as "more of a Democrat."

Similarly, the candidates themselves, and the super PACs trying to help them win, haven't put any money into a Trump-defeating effort on television. Instead, they said, their strategy appears to be to wait for Trump, the star of the political summer, to fade on his own.

Fred Malek, a longtime Republican presidential fundraiser who isn't aligned with a specific candidate, said the approach of many has been to "let Trump beat Trump."

"I'm not aware of any organized effort to attack Trump," Malek said. "Rather, the best-informed Republicans feel the American people are smart enough to figure this out and won't nominate Trump."

Former Texas Gov. Rick Perry, who last week became the first candidate to leave the 2016 race, was one of the feistiest Trump combatants, but his super PACs never paid for any ads to amplify that message.

"Our plan, which I think is where a lot of folks are, was to wait as long as possible to do contrast ads or attacks on Trump," said Austin Barbour, leader of a trio of super PACs that supported Perry. "There's a feeling that his poll numbers are vastly inflated and will start coming down on their own, so no one wants to spend valuable resources doing what may just happen naturally."

Trump had spent only about $1.9 million -- most of it his own money -- through the end of June, according to the most recent fundraising reports filed with federal regulators. In that same time period, donors backing other Republican presidential candidates gave about $300 million, those reports show.

But the billionaire candidate has vowed to spend whatever it takes to win the GOP nomination, meaning that even the best-funded opponents or Republican groups could find themselves financially overmatched.

Adding to the confusion: Trump's meteoric rise has come not after a slew of pricey, well-crafted advertisements, but rather from intense media coverage of his every move, which costs him nothing.

The Trump phenomenon "in a weird way is showing the diminishing importance of money in politics," said John Jordan, a California winery owner and major Republican donor. "And because of that, I think the flow of money is slowing to a trickle."

Presidential candidate are due to file their next fundraising reports, showing what they've raised and spent through the end of September, by October 15.