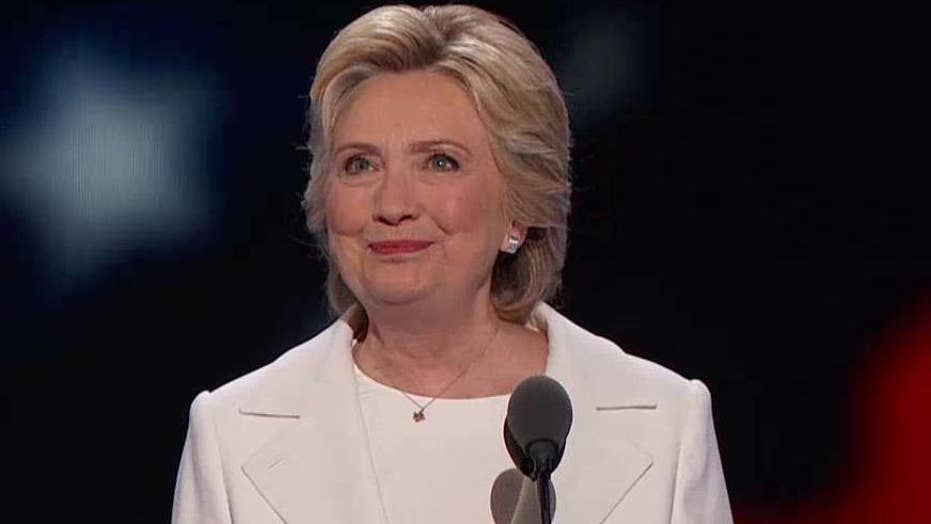 The Supreme Court – it’s no secret – is at stake in the 2016 election. But legal experts say the impact will be far more sweeping if Hillary Clinton wins in the fall, and is able to fill the seat of the late Justice Antonin Scalia with a left-leaning judge.

That point was only underscored at last week’s Democratic convention, where the Democratic presidential nominee pushed for changes on everything from campaign finance to gun rights, at times citing the court’s role.

Here’s a closer look at what’s at stake, with many of these issues likely to come before the next court:

“We need to appoint Supreme Court justices who will get money out of politics,” Clinton said in her speech in Philadelphia.

But many legal experts say doing that also involves rolling back protections on political speech. The focus of the Clinton-Sanders ire is the decision in the case known as Citizens United.

In 2008, Citizens United -- an organization with corporate funding -- produced a documentary criticizing Clinton and was sued because there was a ban on such groups mentioning a candidate in a broadcast within 60 days of an election. The Supreme Court allowed the anti-Clinton film to be aired close to elections, by a narrow 5-4 decision. It also went further and said government has no power under the Constitution to ban corporate political speech in general, in turn lifting such spending restrictions. Both President Obama and Clinton condemned that ruling, saying it gives corporations too much power.

Some legal analysts now say a court with a Clinton appointee could rule that companies have no right to run videos that criticize a candidate close to an election.

“I think [Citizens United] would likely be overturned, given the statements from Clinton, and the likely position of her nominees,” UCLA law professor Eugene Volokh, who specializes in the First Amendment, told FoxNews.com.

Legal experts told FoxNews.com it was the most certain change to expect under a Clinton court.

“The court would definitely be inclined to reverse Citizens United,” said David Bernstein, a law professor at George Mason University.

Clinton also vowed in her convention address that she had no interest in repealing the Second Amendment and wants only to pass common-sense reforms.

But the Democratic candidate has taken issue with the high court’s current view of gun rights. Leaked audio from a Clinton fundraiser in 2015 revealed Clinton telling donors “the Supreme Court is wrong on the Second Amendment.”

Legal analysts say a Clinton appointee could mean the court would no longer consider Americans to have an individual right to “keep and bear arms” – a right the court only affirmed by a narrow 5-4 decision in 2008.

“They may reverse that decision, or they may limit it so it doesn’t mean much,” Bernstein said.

Several experts said the court would most likely take a stealthy approach to avoid causing too many political problems. But it would still mark a change in the judicial winds for gun rights.

“They would say ‘you have the individual right to bear arms, but it’s subject to reasonable regulation -- loosely defined,’” Bernstein said, noting that the “reasonable regulation” could include policies such as a handgun ban for all citizens unless a person could convince authorities they have a “good reason” to own one.

Such bans might then be implemented by cities such as Chicago and Washington, D.C., which banned handguns until the courts recently forced them to allow ownership.

“They would probably overturn Hobby Lobby,” Bernstein said, referring to a 5-4 decision in 2014 that said the government may not force companies to provide health insurance for certain kinds of contraception – as long as there are only a few owners of the company and the contraception would conflict with their religious beliefs.

Some liberal justices say using school vouchers at religious schools violates the First Amendment clause that forbids the government from establishing a religion.

"There is at least a good possibility that the court would reverse itself and say that you can’t have vouchers that go to religious schools," Bernstein told FoxNews.com, noting the court also might be too concerned about the political repercussions to do so.

University of Pennsylvania law professor Kermit Roosevelt, who specializes in the Constitution, said he sees the shift happening on the Supreme Court. "I could see the death penalty being invalidated -- it looks as though some of the sitting justices have been moving in that direction," he said.

This is another subject Clinton tied to the Supreme Court in her convention speech, saying America needs Supreme Court justices who will "expand voting rights, not restrict them."

Voter ID laws, largely passed by Republican-led states, have been in the crosshairs of Democrats for years. Critics – including allied justices – argue that such laws are unconstitutional because minorities are less likely to have IDs.

Under a Clinton court, Bernstein said, "I think you can expect that voter ID laws will go down."

Plenty of other issues, from union power to discrimination rules and more, also could come before the new court. Legal experts who spoke with FoxNews.com differed on how likely each of the above changes are -- but they agreed that major changes would be likely under Clinton.

"The court will side more with the government and against individual liberty,” William and Mary law professor Alan Meese told FoxNews.com.

Legal experts cautioned that a left-leaning court may not act on all of the above.

“The Supreme Court generally doesn't like to [overturn recent decisions] because it makes them look political, but for some of these cases I could imagine it happening,” Roosevelt said, adding he thinks a Clinton court would not outright rule that the Second Amendment is not an individual right and would likely leave school vouchers and voter ID laws intact in some cases.

The impact of a Donald Trump court, analysts said, is harder to pin down but likely to cause fewer changes – as a Trump nominee probably would be ideologically similar to Scalia.

“On the average, his justices will be more likely to enforce conservative constitutional principles,” Bernstein told FoxNews.com.

The author, Maxim Lott, can be reached on Twitter at @maximlott