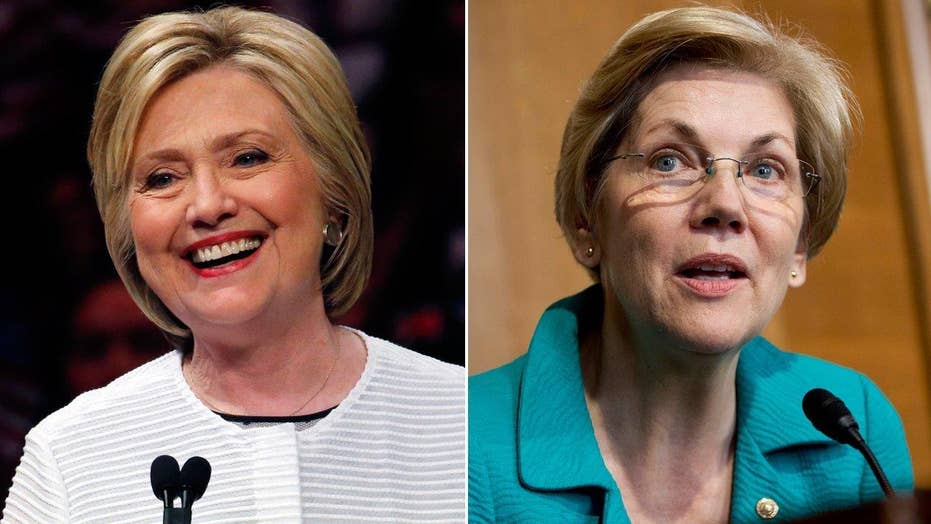 Hillary Clinton huddled with liberal icon Elizabeth Warren in Washington Friday morning, stoking already-burning speculation about the possibility of an all-female Democratic ticket – and one pulled markedly to the left.

The Massachusetts senator, who at one time was under pressure from progressive groups to run herself, met with the now-presumptive nominee at her Washington, D.C., home for about an hour.

She did not take questions from the press.

A Clinton official later told Fox News Clinton thanked Warren for her endorsement, and they talked about working together over the course of the campaign to advance a progressive agenda.

The meeting comes after Warren on Thursday threw her support behind Clinton, following President Obama in sending a signal to progressive voters now backing Bernie Sanders that it's time to unite around the presumptive nominee.

"I am ready to get in this fight and work my heart out for Hillary Clinton to become the next president of the United States and to make sure that Donald Trump never gets anyplace close to the White House," the Massachusetts senator said on MSNBC's "The Rachel Maddow Show."

Warren was the only holdout among the Senate's Democratic women and, given her stature among liberals, her endorsement was seen as a potentially important boost for Clinton.

Moreover, signing on Warren as a running mate could energize a base that has its reservations about Clinton.

In an interview with Politico, Clinton said earlier this week that Warren is “qualified” for any role including VP. It’s unclear how seriously she may be under consideration.

But she already has taken on the role of lead attack dog for the Democrats against presumptive Republican nominee Donald Trump.

Amid the buzz Friday morning, Trump said on Twitter he hopes Clinton does pick her as running mate.

The liberal lawmaker increasingly has tangled with Trump, at times more effectively than other Democrats, including Clinton herself. Trump has lashed back, labeling her "Goofy Elizabeth Warren" and ridiculing her claims to Native American heritage.

Ahead of her endorsement Thursday, Warren spoke to the American Constitution Society and attacked Trump as a "loud, nasty, thin-skinned fraud."