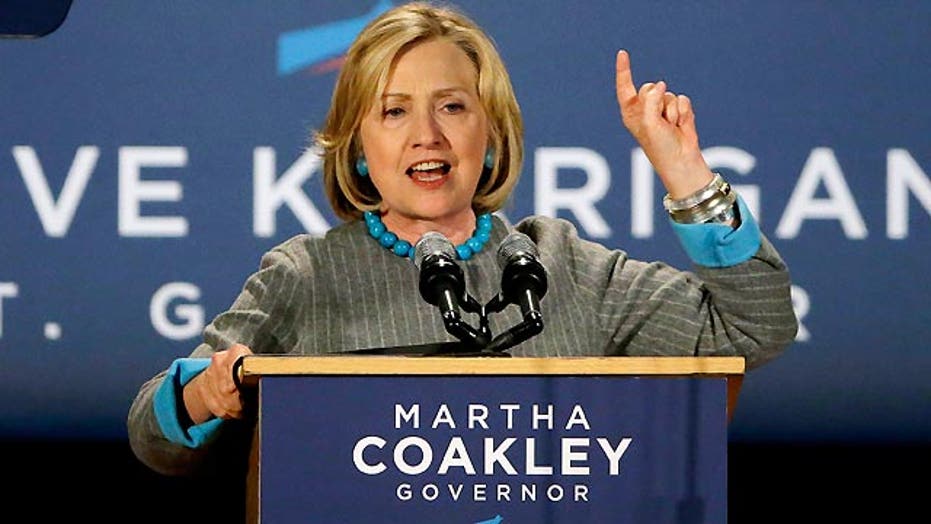 The former secretary of State is trying to pull back on controversial remarks last week where she suggested businesses don't create jobs -- she now says she "short-handed" her point, though some Republicans aren't buying it.

Clinton, the presumed Democratic front-runner should she enter the 2016 White House race, made the remarks last week at a political rally in Massachusetts, sparking questions about whether the former senator and first lady was radically changing her economic message.

“Don’t let anybody tell you that, you know, it's corporations and businesses that create jobs,” Clinton said at a rally on Friday in Boston for Martha Coakley, the Democratic nominee for governor. Also in attendance was liberal Massachusetts Democratic Sen. Elizabeth Warren.

On Monday, though, Clinton explained she had “short-handed this point the other day.”

“Let me be absolutely clear about what I’ve been saying for a couple of decades,” she said at political rally in upstate New York. “Our economy grows when businesses and entrepreneurs create good-paying jobs here in America and workers and families are empowered to build from the bottom up and the middle out -- not when we hand out tax breaks for corporations that outsource jobs or stash their profits overseas.”

However, Washington Republicans were not convinced.

“What Hillary did when saying small businesses and corporations don’t create jobs wasn’t shorthand, it was something she wishes she hadn’t said,”  Republican National Committee spokeswoman Kirsten Kukowski said. “That’s a gaffe.”

Political analysts also have speculated about whether Clinton was trying to channel the anti-Wall Street message that is being put forth by Warren and is popular within the populist wing of the Democratic Party -- a wing that is encouraging the first-term senator to make a 2016 presidential run.

However, a Clinton aide told Politico that Clinton’s original remarks made so little sense that clearly she left out some words.