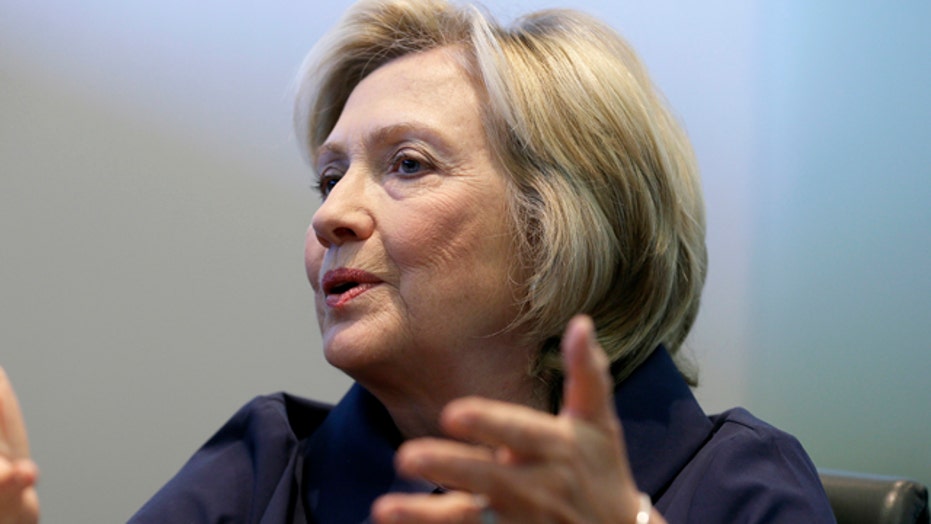 Clinton says no email apology: 'What I did was allowed'

CEDAR RAPIDS, Iowa – Hillary Rodham Clinton said Monday she does not need to apologize for using a private email account and server while at the State Department because "what I did was allowed."

In an interview with The Associated Press during a Labor Day campaign swing through Iowa, the front-runner for the Democratic presidential nomination also said the lingering questions about her email practices while serving as President Barack Obama's first secretary of state have not damaged her campaign.

"Not at all. It's a distraction, certainly," Clinton said. "But it hasn't in any way affected the plan for our campaign, the efforts we're making to organize here in Iowa and elsewhere in the country. And I still feel very confident about the organization and the message that my campaign is putting out."

Yet even in calling the inquiry into how she used email as the nation's top diplomat a distraction, Clinton played down how it has affected her personally as a candidate.

"As the person who has been at the center of it, not very much," Clinton said. "I have worked really hard this summer, sticking to my game plan about how I wanted to sort of reintroduce myself to the American people."

As she has often said in recent weeks, Clinton told AP it would have been a "better choice" for her to use separate email accounts for her personal and public business. "I've also tried to not only take responsibility, because it was my decision, but to be as transparent as possible," Clinton said.

Part of that effort, Clinton said, is answering any questions about her email "in as many different settings as I can." She noted she has sought for nearly a year to testify before Congress about the issue, and that she is now slated to do so in October.

The one-on-one interview with AP was the second for Clinton in the past four days. On Friday, she did not apologize for using a private email system when asked directly by NBC, "Are you sorry?" Asked Monday by the AP why she won't directly apologize, Clinton said: "What I did was allowed. It was allowed by the State Department. The State Department has confirmed that.

"I did not send or receive any information marked classified," Clinton said. "I take the responsibilities of handling classified materials very seriously and did so."

Clinton's efforts to address the email issue comes as her chief rival for the Democratic nomination, independent Vermont Sen. Bernie Sanders, exits the summer surging in still-quite-early public opinion polls and drawing massive crowds to his rallies and events.

Asked for an example of how she differs with Sanders on policy, Clinton demurred. "I'm going to keep laying out what I would do as president, what I stand for. ... I'm very much looking forward to the debates that we're going to have and we'll have plenty of time to draw those contrasts."

Asked when she might start, Clinton said: "I don't have any timing. I'm talking about what I would do as president: where I stand, what I believe."

Late Monday, Clinton picked up the endorsement of Iowa Rep. Dave Loebsack, adding to a growing collection that includes the nod Saturday from New Hampshire Sen. Jeanne Shaheen. Loebsack told a rally in Hampton, Ill., there was "nobody more qualified" to be president.

Last year, Clinton turned over roughly 55,000 pages of emails to the State Department that she sent and received using a home-brew email server set up at her home in suburban New York while serving as secretary of state from 2009 to 2013.

Clinton has said she set up her own system instead of using a State Department account for the convenience of using a single hand-held email device.

The State Department is currently reviewing and publicly releasing those emails, some showing that Clinton received messages that were later determined to contain classified information, including some that contained material regarding the production and dissemination of U.S. intelligence.

"There is always a debate among different agencies about what something should be retroactively (marked classified)," Clinton told the AP on Monday. "But at the time, there were none. So I'm going to keep answering the questions and providing the facts so that people can understand better what happened."

Last month, Clinton gave the server to the FBI, along with a thumb drive kept by her attorney that contained copies of the emails.

"It is not a criminal investigation, it is a security review," Clinton said. "People are asked to provide any copies of any of these materials that are the subject of the debate. So, I immediately said, 'turn over everything.'"

Clinton added, "I don't know anything technical about servers. But I am informed it doesn't have anything on it. But for safekeeping, turn it over as part of the security review."