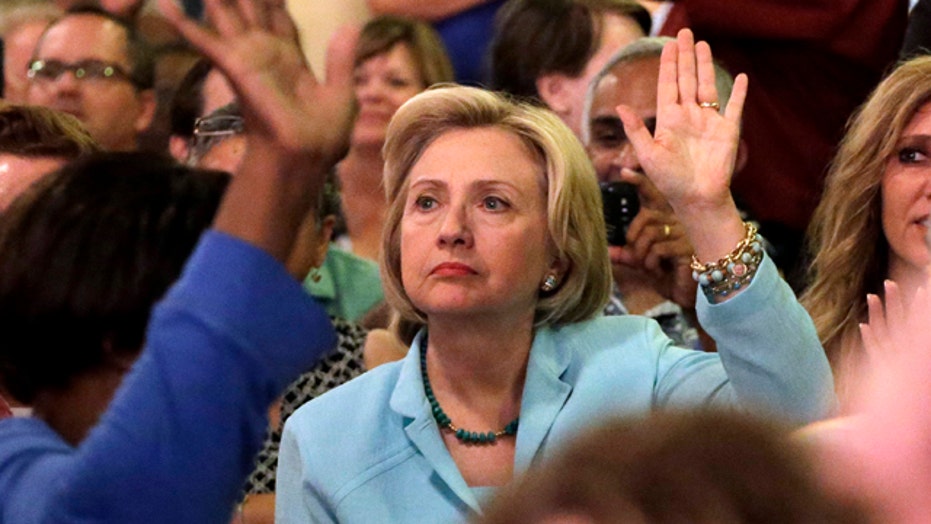 Will Democratic donors cash out?

President Obama and Democratic presidential candidate Hillary Clinton met face to face Saturday evening on Martha's Vineyard, amid increasing scrutiny about Clinton's activities as secretary of state and speculation about whether Vice President Biden will challenge her in 2016.

Clinton and Obama met on the same exclusive Massachusetts vacation island on which they met last August under strained circumstances. The two attended an 80th birthday party for Vernon Jordan, a Democratic operative and former Clinton administration adviser.

The swanky Massachusetts island is a famous as a gathering spot for prominent Democratic figures.

Clinton joined Obama, who is vacationing on the island with his family, along with a number of big-name corporate, civil rights and other political leaders.

Obama played golf with Jordan and President Clinton on Saturday afternoon on the island.

"Good!" said a spry-looking Clinton, donning light blue pants and a dark shirt, after Obama made his putt on the first hole at Farm Neck Golf Club in Oak Bluffs. The former president then kneeled down to scope out his own putt before joining Obama on a golf cart to be driven to the second hole.

Both Clintons were on the guest list for Jordan's 80th birthday party on Saturday night, along with the president, first lady Michelle Obama and daughters Sasha and Malia.

Last year before they met, Clinton criticized the administration’s foreign policy, arguing in a story in The Atlantic that failing to arm Syrian rebels against the regime of Syria’s Bashar al Assad could have contributed to the rise of radical Islamic groups in Syria and Iraq.

She called Obama a day before they met at a private party on the Vineyard and told reporters she would "absolutely" hug it out with the president.

This year, Clinton's use of a private server and email accounts while she was secretary of state from 2009 to 2013 has become an increasing concern. She turned over roughly 55,000 pages of emails but deleted thousands of others she deemed personal.

Clinton has recently turned over the server to the State Department, and the FBI is now investigating how classified information from the agency reached the server.

The front running Clinton’s poll numbers, including those about her trustworthiness among voters, have declined in recent weeks as the email controversy appears to grow, which has created speculation about whether Biden will launch another presidential bid.

Clinton traveled to the island after speaking Saturday afternoon at the Iowa State Fair.

She and husband Bill Clinton, a former president, are scheduled to vacation in the Hamptons, a New York vacation spot also popular with the wealthy and famous, in the last two weeks of August.

Biden running could create a politically awkward situation for Obama, though he is not expected to endorse a candidate in the party primary.

Biden supporters are reportedly already looking at a possible campaign and fundraising potential.

Obama and his family vacation almost every August on Martha's Vineyard, and he's been spending most of this year's two-week trip on the golf course, at the beach and dining at the island's upscale restaurants. Obama returns to Washington on Aug. 23.

The president and Hillary Clinton also met privately at the White House in March, according to The Washington Times.