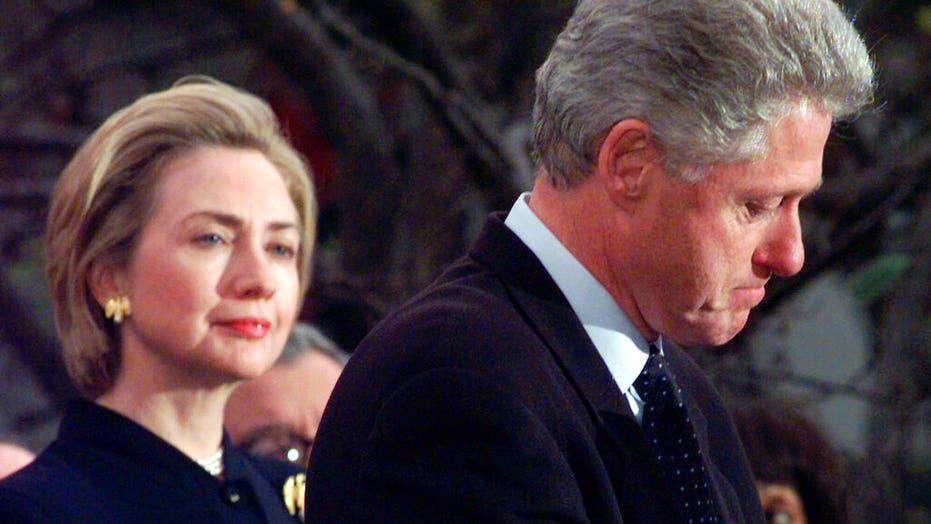 Here's a look at what the 13 impeachment managers from former President Bill Clinton's trial in 1999 are up to today, and what they're saying about the ongoing Senate impeachment trial against President Trump.

In a recent interview with The New York Times, he said: “To see Jim Sensenbrenner and Steve Chabot up there, and Lindsey Graham up on the other side, it is sort of odd. Here we are 20 years later, and we’re doing the exact same thing again.”

Rep. Ed Bryant, of Tennessee, one of the House Managers during Clinton's impeachment, talks with reporters on his way to a strategy meeting in the Rayburn House Office Building on Feb. 3, 1999 in Washington, DC. (Photo by David Hume Kennerly/Getty Images)

Ed Bryant: Rep. Ed Bryant, R-Tenn., is a retired judge who served as the United States Attorney for the Western District of Tennessee.

On the first day of House arguments in 1999, Bryant said: “Every trial must have a beginning and this trial begins on a cold day in January 1993,” before he played footage of Clinton taking the oath of office, the first of a dozen clips shown on that day.

U.S. Senator Steve Buyer (R-IN) walks in the halls of the U.S. Senate as Capitol Hill police hold back the media in the halls shortly before the start of the January 14 impeachment trial of President Bill Clinton. (Photo by TIM SLOAN/AFP via Getty Images)

Steve Buyer: Sen. Steve Buyer, R-Ind., is currently a lobbyist working with R.J. Reynolds, the second-largest tobacco company in the United States, to promote the use of smokeless tobacco.

In an interview with The Tribune in December 2019, Buyer expressed his unhappiness at Clinton's acquittal in 1999 and said: "The possibility that a future president may commit more egregious acts than perjury or obstruction of justice and then demand party loyalty to defend himself against impeachment is the precedent. We had a duty to search for the truth."

Chairman Charles T. Canady, R-Fla., and Chairman Henry J. Hyde, R-Ill., watch a videotape of the Watergate proceedings at the Constitution Subcommittee of House Judiciary Committees hearing on the history and background of impeachment. (Photo by Douglas Graham/Congressional Quarterly/Getty Images)

Charles Canady: Rep. Charles Canady, R-Fla., is currently the Chief Justice of the Florida Supreme Court and has been since 2008.

He has declined all interview requests on the subject of impeachment.

In an interview that aired Tuesday on CNN, Cannon said: "What we're doing today, what the Senate Majority is doing today is similar to what was done. The precedence is there, I think it is appropriate. But the House ought to be doing much deeper and clear[er] investigation. Thus far all we have -- we have the Mueller report, did you guys [see] Mueller testify? He didn't have his cookies. We were attacking the president, not trying to make America better."

Rep. Steve Chabot, R-Ohio, votes no on the second article of impeachment as the House Judiciary Committee holds a public hearing to vote on the two articles of impeachment against U.S. President Donald Trump in the Longworth House Office Building on Capitol Hill December 13, 2019 in Washington, DC. (Photo by Patrick Semansky-Pool/Getty Images)

Steve Chabot: Rep. Steve Chabot, R-Ohio, is still a current member of the House of Representatives.

“I’ve been through one of these before,” he said during a House hearing last month. “And they’re ugly. So I have a lot of sympathy for the House managers that are going to be picked.”

After the conclusion of Clinton's trial, Gekas commented on the fairness of the proceedings.

“In this case, it’s not a question of winning or losing,” Gekas told The Associated Press in 1999. “It’s only a question on our part of evaluating, ‘Did we do a fair job?’ I feel 100 percent confident that we did.”

Sen. Lindsey Graham, R-S.C., speaks to the media before attending the impeachment trial of President Trump on charges of abuse of power and obstruction of Congress, Thursday, Jan. 23, 2020, on Capitol Hill in Washington. (AP Photo/Jose Luis Magana)

On Thursday, he defended Trump's demeanor, telling reporters that the president is "having the reaction that a normal person would have if they thought they were being accused of something they didn’t do.”

After a brief dinner break, Graham offered some advice to Trump, who has said that he is considering attending his own impeachment trial.

Hutchinson has not made any recent statements about Trump's impeachment but has supported several pieces of legislation signed by the president, including a recent law that raises the minimum age to purchase tobacco to 21.

In an interview with CNN's Fredricka Whitfield on Sunday, McCollum had this to say about allowing witnesses at Trump's trial.

"If the motion to dismiss is voted down, then I'm all for witnesses and I'm for witnesses for both sides. And I've always been for witnesses, and I'm for witnesses that are live," he said. "But the real fundamental question that has to be answered first by a majority of the senators, one way or the other, is even if this is all proven, if everything is there, you don't present the witnesses if you presume there is something still in doubt in terms of facts. It's all about the facts. Whereas the motion to dismiss is not about the facts, they're assuming all those facts are true. But even if the president did everything that's being alleged is something you remove the president for, is it a high crime or misdemeanor, and the opinion is very subjective, the abuse of power charges, very subjective. So that's where the issue comes down to the very first stage of this."

"But I think odds are you're going to have witnesses. The odds are that motion is going down, but it's going to be a close vote," he added.

Jim Rogan: Rep. Jim Rogan, R-Calif., is currently a judge for the Superior Court of California.

In a 2004 interview with the Daily Signal, Rogan recalled that impeachment "made me very much of a pariah in the district," and admitted that it caused him to lose his district in the following elections.

U.S. Representative Jim Sensenbrenner (R-WI) speaks during the mark up of the articles of impeachment at the House Judiciary Committee in Washington.- (Photo credit: Michael Brochstein / Echoes Wire / Barcroft Media via Getty Images)

Jim Sensenbrenner: Rep. Jim Sensenbrenner, R-Wis., is a current member of the House of Representatives. He will not be running for reelection after more than 40 years in the House and said in an interview with The New York Times, “I really don’t want to give them any advice but I guess I can say is that this is going to be a lot more work than you think.”

“The American people are going to be watching,” he added.

“I’m going through the déjà vu period of my life,” he said as he left the House floor before the impeachment votes against Trump. “I never thought I would have to do this again.”