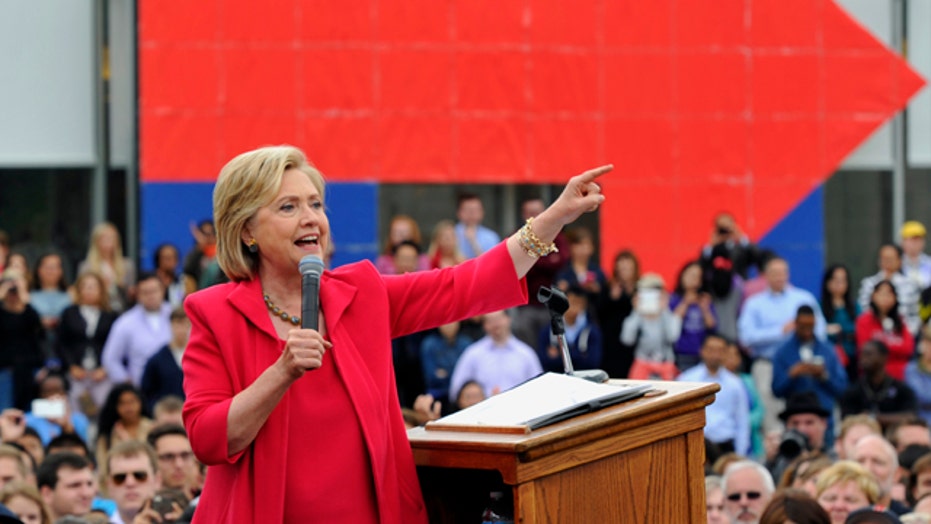 Is Clinton facing an enthusiasm gap?

Amid the controversy over her email system and speculation over Vice President Biden entering the race, Hillary Clinton is facing an intangible -- but, analysts say, very real -- political crisis: the enthusiasm gap.

The polls paint part of the picture, with the latest Quinnipiac poll showing her with her worst "favorability" rating yet. But the audiences at her campaign stump speeches really tell the story.

For a Democratic front-runner, she's just not drawing huge crowds. By comparison, underdog Democratic candidate Sen. Bernie Sanders is a rock star, as is gadfly Republican front-runner Donald Trump, both of whom are filling thousands of seats on the road -- much like Barack Obama in the 2008 race.

"I think you see a certain amount of exhaustion amongst Democrats and a certain amount of Clinton fatigue," said Jeanne Zaino, political science professor at Iona College, who says the drip-drip of email revelations have "taken their toll" and it is reflecting in the crowd sizes as well as poll numbers.

On Thursday at Case Western Reserve University in the battleground state of Ohio, Clinton spoke to a crowd of an estimated 2,800 people in an outdoor “commit to vote” rally, the first for her campaign outside the key primary/caucus states of Iowa, New Hampshire and South Carolina.

Her biggest crowd, of 5,500 people, was for her New York City kick-off rally. She hasn't matched that number since, drawing an estimated 1,800 to a Virginia fundraiser in June. Clinton has, rather, held grassroots organizing and town hall events more conducive to smaller crowds. Terry Madonna, director of the Franklin & Marshall College Poll, says this is likely designed that way, "because she is very good in small venues and not so much in big ones."

For example, she chose to unveil her college affordability plan to an audience of about 600 at Exeter High School in New Hampshire on Aug. 10. On Aug. 6, she jazzed up an estimated 300 supporters in a packed nightclub in Denver, and on Aug. 18, held a town meeting in a Las Vegas community center that drew an estimated 300.

Yet Sanders, who runs to the left of Clinton, has drawn well over 100,000 people combined at his summer rallies as of mid-August. In a pair of appearances in Portland, Ore., and Los Angeles in August alone, he attracted an estimated 55,000 people.

“I hardly see any liberal enthusiasm for [Clinton], and they are concerned she could even drag down the entire ticket,” charged Richard Viguerie, longtime conservative media strategist, who blames the energy lag on Clinton’s political “baggage” and her demeanor, which he claims has never been “warm and fuzzy.”

Michael Cohen, a Boston Globe columnist, disagrees, calling the “enthusiasm gap” a creation of media boredom during the dog days of summer. “I don’t think it much matters what is happening in August,” he told FoxNews.com. “I think it’s hard for anyone to get excited about politics right now. All of a sudden people are saying she is in trouble and I just don’t see any evidence of that.”

“She has the support,” Democratic strategist Doug Schoen told FoxNews.com, “but she needs to get a message and to communicate a campaign strategy to mobilize and excite the Democratic base.” Does she have the tools light a fire under this base? “That’s an open question,” Schoen said.

But even squared against this time in 2007, Clinton's crowds don't hold a candle to those of Obama, who was drawing huge audiences of exuberant, mostly young, supporters.

On Sept. 27, 2007, Obama set a record for that early stage of the Democratic primary, filling Washington Square Park in New York City with an estimated 24,000 people. He had been drawing five-digit crowds since February, according to The New York Times.

Clinton is trying to rev up the base, while also assuring party powerbrokers that all is well in Clinton Land.

The Clinton campaign sent out a string of memos Thursday touting their organizational efforts – and support – in key primary/caucus states.  A memo on the state-of-play in New Hampshire said organizers are activating more than 3,400 residents to take part in the campaign.

“With more than 11,400 followers and fans, Hillary for New Hampshire’s Facebook and Twitter pages are among some of the largest political accounts in the state,” the memo said.

As for Iowa, a campaign memo said, “the campaign has 47 organizers on the ground with more on the way, 11 offices open from river to river where volunteers are being engaged, at least one identified supporter in each of Iowa’s 1,682 precincts.”

The candidate also addressed the Democratic National Committee summer meeting on Friday, touting her own organization while mocking Trump, criticizing other Republican candidates on women's issues and questioning whether those candidates think "black lives matter."

But despite her sharp comparisons of Republicans to extremists on women’s issues – a battle cry to the liberal flank – Sanders appears to be getting more visible adulation from college-age crowds. Not that all his rallies have been ‘full Bern.’ In a recent swing through South Carolina, Sanders faced the stiffer task of appealing to black  voters who typically weigh in heavy for Clinton. According to Politico, he drew an estimated crowd of 2,800 in Greenville, and around 3,150 for his Aug. 22 rally in North Charleston. The College of Charleston, however, still covered his speech as though it were a major campus event.

“Crowds cheered and waved signs. Couples danced together, laughing and smiling. What would appear to be a summer music festival was quite the opposite, this was the Bernie Sanders rally,” the school's paper said.

Viguerie told FoxNews.com that Sanders and Trump are “change” candidates who are stealing the show because they are appealing to voters angry and frustrated with the status quo.

“If you are reasonably happy with the way things are, you can vote for Hillary or Jeb Bush,” said Viguerie.

Schoen doesn’t think the size of the crowds actually matters for Clinton’s overall success, and he has written that he believes she will still be the nominee. “But there are a lot of challenges she still has to face,” he acknowledged, and one of them is energy.