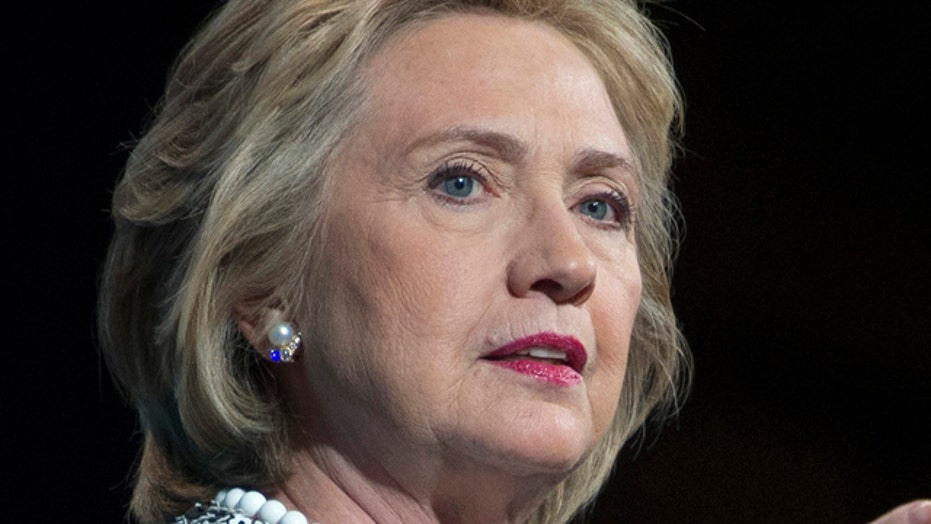 Hillary Clinton repeatedly deflected criticism over the Benghazi terror attack as she set out on a round of interviews promoting her new memoir -- while also tackling topics, like Monica Lewinsky, that the potential presidential candidate rarely discusses publicly.

The former first lady was also trying to walk back what could be her first campaign gaffe of sorts, after saying in an interview aired Monday that she and Bill Clinton were "dead broke" after leaving the White House.

Clarifying those comments, she told ABC's "Good Morning America" on Tuesday that she and her husband "fully appreciate how hard life is for so many Americans." She said they left the White House roughly $12 million in debt -- but she also acknowledged that "we've continued to be blessed in the last 14 years."

Clinton is plastering the airwaves, on the day her book "Hard Choices" is being released.

In an interview with ABC's Diane Sawyer, the former secretary of state was repeatedly challenged on the events of Sept. 11, 2012, when four Americans died in the attack on the U.S. compound in Benghazi.

Asked if she missed the moment to prevent the attack, she said: "No."

She acknowledged cables warning about security problems at the compound, but said they were "never brought to me."

She said she gave "direct instructions" to people with security expertise, but said, "I'm not equipped to sit and look at blueprints to determine where the blast walls need to be or where the reinforcements need to be."

At one point, she said she would "give anything on Earth if this had not happened" and wishes they could have "made some of the changes that came to our attention to make as a result of the investigation."

"I take responsibility," she said, but then added: "But I was not making security decisions."

Clinton also said Republican inquiries into her handling of the deadly 2012 attack gave her more of an incentive to run. While she said she's still undecided about her political future, Clinton cited the Benghazi probe as an example of a dysfunctional Congress.

"It's more of a reason to run, because I do not believe our great country should be playing minor league ball. We ought to be in the majors," Clinton said. "I view this as really apart from, even a diversion from, the hard work that the Congress should be doing about the problems facing our country and the world."

She also spoke briefly about Lewinsky, who has started to speak out after years of staying out of the public eye. Clinton said she is "free to do that."

"She is, in my view, an American who gets to express herself however she chooses," Clinton said. "But that's, you know, not something that I spend a lot of time thinking about."

On Tuesday, she continued to deal with fallout from her comments about her own personal finances, and being "dead broke."

Clinton said that she and her husband have "gone through some of the same challenges that many people have" and that they "understand what that struggle is."

Clinton's Senate financial disclosure forms, filed for 2000, show assets between $781,000 and almost $1.8 million. The forms allow senators to report assets in broad ranges. The same form, however, showed that the Clintons owed between $2.3 million and $10.6 million in legal bills to four firms.

The Clintons, though, did all right for themselves, and quickly -- Bill Clinton almost immediately hit the speaking circuit, making millions along the way.

Meanwhile, despite the family's debt, they got help back in 1999 from fundraiser Terry McAuliffe (now, the governor of Virginia) to secure a loan for a $1.7 million home in Chappaqua, N.Y. The home helped Hillary Clinton claim residency so she could run for Senate.

By 2009, when Hillary Clinton was preparing to join President Obama's administration as secretary of state, the Clintons' wealth was somewhere between $10 million and $50 million.

Republicans seized on the "dead broke" comment and said it demonstrated that Clinton, the Democratic Party's strongest contender for its 2016 presidential nomination, was out of touch.

"I think she's been out of touch with average people for a long time," said Republican National Committee Chairman Reince Priebus, pointing to Clinton's estimated $200,000-per-speech speaking fees and million-dollar book advances. "Whether she was flat broke or not is not the issue. It's tone deaf to average people."

On Benghazi, multiple independent, bipartisan and Republican-led investigations have faulted the State Department for inadequate security in Benghazi, leading to four demotions. No attacker has been arrested.

Asked whether she will testify before a new congressional committee investigating the attacks, Clinton would not make any commitments, saying it depends on how the inquiry is conducted.

"I'm not going to say one way or another," Clinton said. "We'll see what they decide to do, how they conduct themselves: Whether this is one more travesty about the loss of four Americans or whether this is in the best tradition of the Congress, an effort to try and figure out what we can do better."