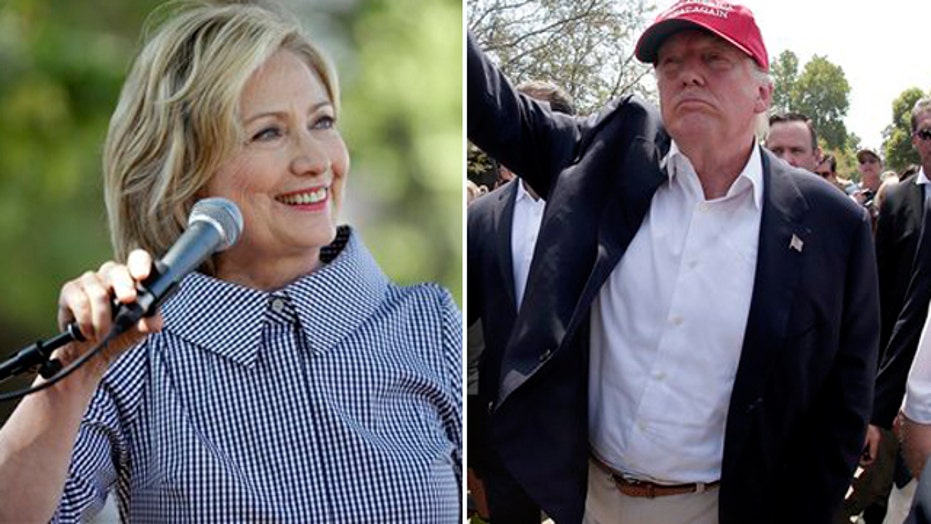 Democrat Hillary Clinton and Republican Donald Trump -- the presidential candidates dominating polls and news headlines -- took their turns Saturday at the Iowa State Fair, with the flamboyant Trump staying on the attack and Clinton suggesting her email controversy is “usual” partisan politics.

Clinton reiterated that she did not send or receive emails marked classified from her homemade email server while secretary of state from 2009 to 2013, an issue that continues to overshadow her campaign.

She told reporters that she would let the inquiry into her email use continue, while she blamed her Republican challengers and House GOP members for turning the issue into a partisan affair.

"The facts are the same as they have been from the very beginning," Clinton said.

She also hit all the highlights of the fair, including the famed butter cow and the pork chop on a stick, amid a moving mass of media and onlookers.

"Nice to be here," Clinton said as she started an hour-long stroll through the fairgrounds at the side of former Iowa Democratic Sen. Tom Harkin.

Trump arrived in a private helicopter about a mile away from the fair and talked with reporters before taking children for a ride in his helicopter.

He slammed several other 2016 candidates, including GOP challenger Jeb Bush over recently suggesting the United States needs to have "skin in the game” to justify helping end the chaos in Iraq.

Trump said the U.S. spent $2 trillion and that thousands of American soldiers were either killed or wounded in trying to bring Democracy to Iraq while Bush argues the U.S. must to prove it has “skin in the game.”

“I think it may be one of the dumbest statements I've ever heard," said the billionaire Trump, who reportedly just opened a campaign office in the first-caucus state of Iowa.

He also called Clinton “the single worst secretary of state in the history of this country.”

Essentially all of the roughly 20 major Democratic and Republican candidates will attend the 10-day fair, with Democratic challenger Vermont Sen. Bernie Sanders and Republican Rick Santorum scheduled to attend Saturday.

Clinton recently turned her server over to the FBI to investigate the security of her email setup, which The Associated Press in March traced to an Internet connection at her home in Chappaqua, N.Y.

Clinton later said she set up her own system -- rather than use a State Department account -- for the convenience of using one BlackBerry device.

Thousands of pages of her emails publicly released in recent months show Clinton did, in fact, receive messages later marked classified, including some that contained material regarding the production and dissemination of U.S. intelligence information.

Clinton said in March she had exchanged about 60,000 emails during her four years in the Obama administration, about half of which were personal and were deleted. She turned over the others to the State Department, which is reviewing and releasing them on a monthly basis.

Last month, the inspector general of the nation's intelligence community raised concerns that classified information had traversed the email system and sent a counterintelligence referral to the Justice Department. The referral did not allege any criminal wrongdoing, and her attorney has said authorities want assurances that the emails continue to be properly stored and that Clinton is "actively cooperating."

It's unclear how well her email system was secured, whether it had proper data backups and whether it was constantly monitored for intrusions by hackers.