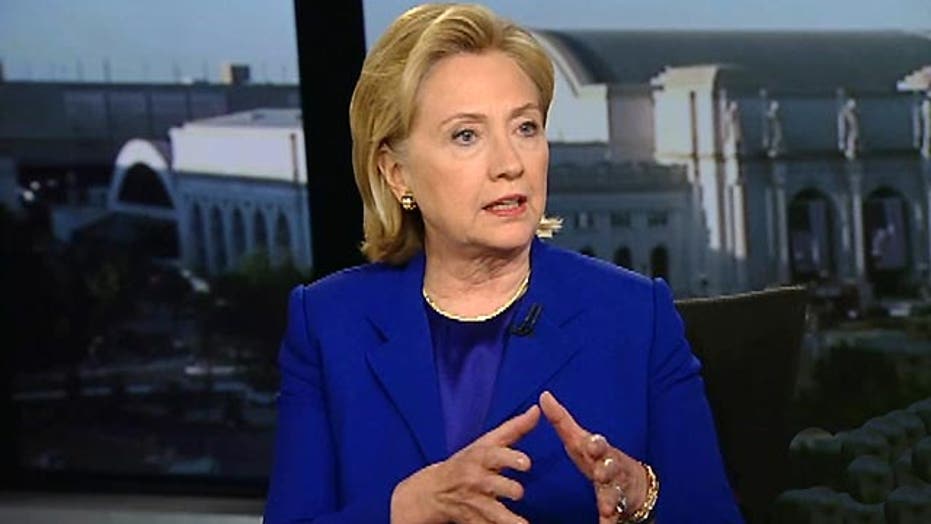 Clinton on capture of Abu Khatalla, night of Benghazi attack

Part 1 of interview with former secretary of state

Hillary Clinton, in a sit-down interview with Fox News, suggested Tuesday that she had doubts from the outset about whether the Benghazi terror attack was triggered by a protest over an anti-Islam film -- though her State Department pushed that narrative for days.

"This was the fog of war," Clinton said, when asked about the administration's controversial public explanation of the attack.

The former secretary of State appeared to offer a nuanced explanation for how her department came to initially embrace the video explanation, which Republicans to this day say was unfounded and misleading. She stood by prior statements that she was not aware of any reports contradicting intelligence community talking points citing the video, yet suggested she was personally unsure about what caused the violence. Four Americans, including U.S. Ambassador Chris Stevens, died in the attack.

"I was trying to make sense of it," Clinton said, suggesting the intelligence community was responsible for making that connection.

Despite her own apparent deliberations, the State Department put out a statement the night of Sept. 11 that cited "inflammatory material posted on the Internet."

The former secretary of State spoke to Fox News as she tours the country in promotion of her new memoir, "Hard Choices," returning in full force to the public spotlight after leaving the Obama State Department last year. The former senator and first lady addressed a wide range of topics, from the NSA scandal to Iraq to the internal workings of the Obama administration.

Clinton is widely believed to be preparing for a 2016 presidential run, though has been coy on that question for months.

The State Department, under her leadership at the time, continues to face questions -- and a congressional probe -- over whether it ignored security warnings leading up to the attack, and why the department and others in the administration overlooked evidence of a terror attack in favor of the faulty explanation that it was fueled by a protest.

Clinton claimed Tuesday that it remains unclear to this day the motivations of all the attackers.

Hours before the interview, the administration announced that a key suspect in the attack, Ahmed Abu Khattala, was captured by a U.S. team over the weekend and was being brought back to the United States to face criminal prosecution. The capture -- the first since the attack -- could help temper criticism that the Obama administration had not brought anybody to justice for the deadly assault, though other suspects remain at large.

Clinton said Tuesday that the capture shows the U.S. will go after anyone who targets Americans.

"We have an unwavering commitment to go after anyone no matter how long it takes who is responsible for harming Americans," she told Fox News, adding that if she were president and the evidence were in place, she would be "ready to give the order" to read Khattala his Miranda rights.

As for the events of Sept. 11, 2012, Clinton said she was engaged with a "full array of officials" on the response to the attack. "We had open lines," she said, adding that President Obama told the Pentagon to "do everything you can to help our people."

Asked what she takes responsibility for, Clinton said: "I took responsibility for being at the head of the State Department at the time. ... That doesn't mean I made every decision, because I obviously did not."

The secretary also touched on the NSA scandal, saying the tapping of German Chancellor Angela Merkel's phone was "absolutely uncalled for" and should be "off limits."

She also addressed the controversy over the IRS targeting of conservative groups. She said it should be investigated, but in a "nonpartisan" way.