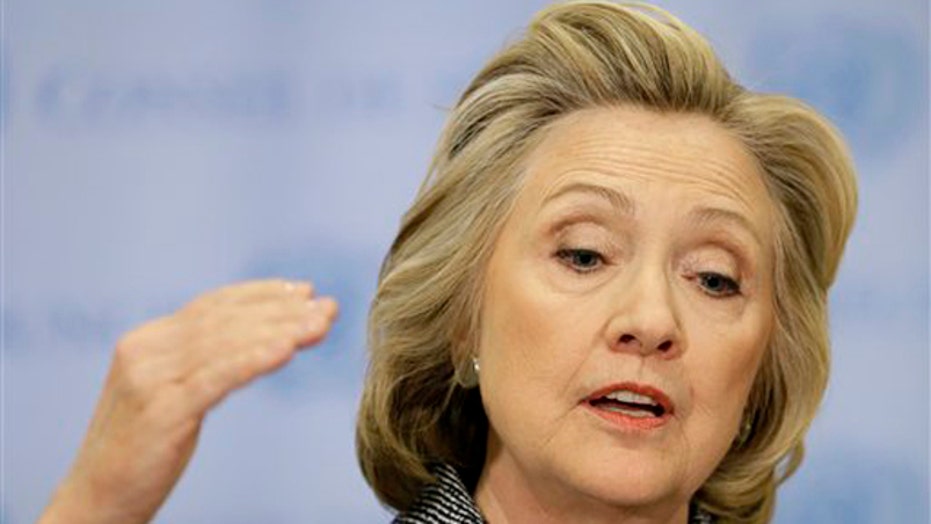 Hillary Clinton’s campaign team circulated a memo to her supporters Saturday that laid out guiding principles, a day before she is expected to kick off her long-anticipated 2016 presidential campaign.

The memo, obtained by Fox News, is called “We Are Hillary For America.” The memo explains the principles and purposes behind the Clinton campaign, saying the campaign’s aim is “to give every family, every small business, and every American a path to lasting prosperity by electing Hillary Clinton the next President of the United States.”

“This campaign is not about Hillary Clinton and not about us -- it’s about the everyday Americans who are trying to build a better life for themselves and their families,” the memo says

The memo concludes with a series of guiding principles that include:

"We are disciplined: driven every day by strategy, not tactics or one offs. We know there will be tough days, but we will bounce back and get back to work. We take risks, always measuring with empirical data to establish best practices."

"We are humble: we take nothing for granted, we are never afraid to lose, we always out-compete and fight for every vote we can win. We know this campaign will be won on the ground, in states."

"We are responsible: we always remember and appreciate the generosity of millions of people who invest their time and resources in Hillary Clinton and in us."

It ends by telling recipients: “We are guided by Hillary’s bedrock values of hard work, service, fairness, and faith in the American Dream."

The former secretary of state is expected to first reveal her decision to voters via social media on Sunday. Sources told Fox News that, as has been widely expected, Clinton will then head to key early voting states like Iowa and New Hampshire next week.

Clinton would be the first Democratic candidate to confirm a run for the White House, and she is considered the clear frontrunner to win the party’s nomination. If she were to win in 2016, she would be the first female U.S. president.

Sources say, in advance of her announcement, Clinton has been holed up in recent days behind closed doors in policy meetings. The meetings have covered a range of subjects, including national security as well as domestic topics like the economy.

Clinton would join the race after two Republicans -- Sens. Ted Cruz of Texas and Rand Paul of Kentucky -- already declared. Sen. Marco Rubio, R-Fla., also is expected to announce his plans next week.

Despite not being an official candidate, Clinton has faced immense scrutiny from the media, and Republicans, over her use of personal email while secretary of state and her family foundation's acceptance of foreign donations. On Friday, Republican Party Chairman Reince Priebus said Clinton "has left a trail of secrecy, scandal and failed liberal policies that no image consultant can erase."