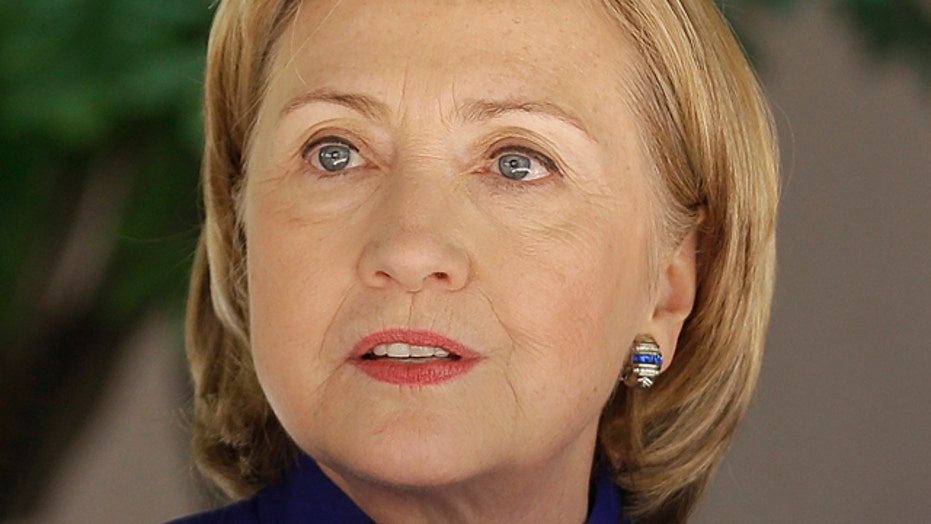 Is Hillary Clinton playing politics with the president?

Former secretary of state distances herself from Obama

For a moment, Hillary Clinton appeared to draw a clear distinction with President Obama on foreign policy, after telling The Atlantic that the “failure” to help moderate Syrian rebels allowed extremists to flourish.

But her comments both before and after that interview have left unclear what the former secretary of State’s views actually are on the crisis.

Two years before her Atlantic interview, Clinton suggested to CBS News that arming a moderate faction in Syria was not “viable.” And since her critical comments of the Obama administration’s policy were published, the ex-secretary has phoned the president to clarify her remarks. According to reports of the call, the message was: no hard feelings.

Obama and Clinton, former presidential rivals, apparently hugged it out Wednesday night during an exclusive party in Martha’s Vineyard. The White House released a brief statement afterward saying Obama and first lady Michelle Obama were “happy” to see the Clintons.

The quick resolution of the tiff, though, leaves open the question of where Clinton stood, or stands, on the crisis gripping Iraq and Syria. And as she weighs a 2016 White House bid, it has opened the former secretary to more criticism of playing politics.

“This is such a blatant display of Clinton inauthenticity. It's breathtaking,” Fox News contributor and syndicated columnist Charles Krauthammer said Wednesday. “She did finally appear to say something that she believes and then, of course, retracted.”

Clinton, according to reports, didn't so much reverse course as she did lay off the throttle of her original criticism. Clinton already had written, in her memoir, about her disagreement with Obama on arming the Syrian rebels; her recent comments were far more pointed.

Clinton tried to take the sting out in advance of Wednesday's party, saying it was not a hard choice to call the president on the heels of her Syria comments and they'd "absolutely" hug it out. “We agreed we are committed to the values and the interests and the security of our country together,” Clinton said. “We have disagreements, as any partners and friends, as we are, might very well have. But I'm proud that I served with him and for him.”

Her original comments stirred controversy because they showed Clinton appearing to sharply part from the president on the critical question of whether the U.S. should have done more to prop up moderate Syrian rebels – at a time when extremist factions have taken over large swaths of Syria and now northern Iraq.

“I know that the failure to help build up a credible fighting force of the people who were the originators of the protests against Assad — there were Islamists, there were secularists, there was everything in the middle — the failure to do that left a big vacuum, which the jihadists have now filled,” Clinton was quoted as saying. “They were often armed in an indiscriminate way by other forces and we had no skin in the game that really enabled us to prevent this indiscriminate arming.”

Clinton also took a slap at what has been reported as a foreign policy motto of sorts within the Obama administration – roughly, “don’t do stupid stuff.”

While she appeared to patch things up with the president, The Daily Beast reported Thursday that Obama’s White House and Clinton’s State Department indeed were in a policy feud over Syria in 2011 and 2012, with Clinton opposing his policy and the White House even barring Clinton’s people from talking directly to moderate Syrian rebels.

According to The Daily Beast, Clinton and her deputies warned the White House the civil war was worsening and more engagement with moderates was needed.

“The State Department warned as early as 2012 that extremists in eastern Syria would link up with extremists in Iraq. We warned in 2012 that Iraq and Syria would become one conflict,” former U.S. ambassador to Syria Robert Ford told The Daily Beast. “We highlighted the competition between rebel groups on the ground, and we warned if we didn’t help the moderates, the extremists would gain.”

If the feud was raging behind the scenes, Clinton was nevertheless siding with the president in public at the time.

In February 2012, she told CBS News that the U.S. doesn’t really know who it would be arming if it went down that road in Syria.

Downplaying the uprisings at the time in Syria, she said: “So if you're a military planner or if you're a secretary of State and you're trying to figure out do you have the elements of an opposition that is actually viable, that we don't see.”

Yet on Wednesday, White House spokesman Eric Schultz acknowledged there was an “honest policy difference” on the matter, but said the president “didn't want to rush to provide military assistance to the Syrian opposition.”

As for the “stupid stuff” critique, he disputed the notion that “that is how we would describe our approach to foreign policy.”

“Just because we have the best hammer, doesn't mean that we have to hit every nail,” Schultz said. “And so I think that the president has taken a thoughtful, deliberate approach to these issues.”

Schultz later sent out the note on Wednesday’s party, saying the first family was happy to spend time with the Clintons.

“The Obamas danced nearly every song. A good time was had by all,” he wrote.