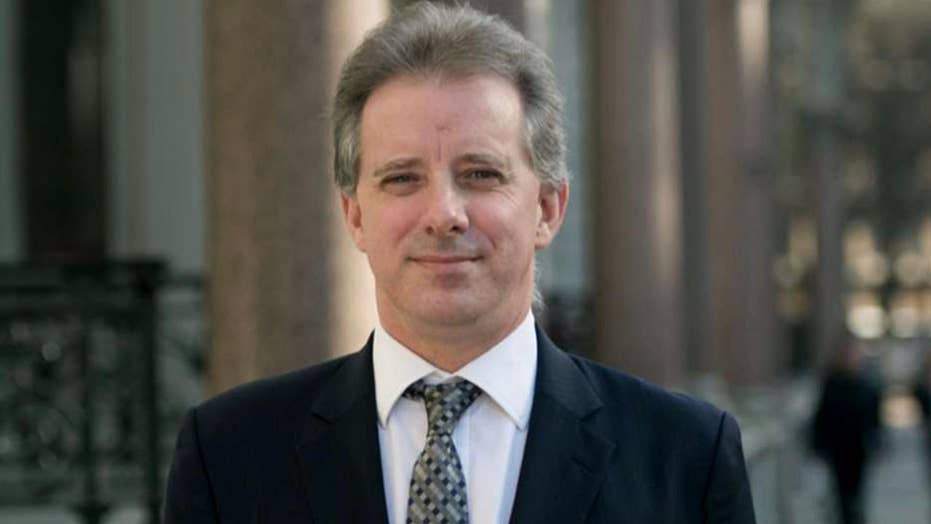 Catherine Herridge reports on the new allegation in the unclassified document from GOP senators.

Clinton associates were "feeding" allegations to former British spy Christopher Steele at the same time he was compiling the controversial anti-Trump dossier paid for by the Democratic National Committee and Clinton campaign, according to an unclassified memo from senior Senate Republicans who recently made a criminal referral.

Those Republicans, Senate Judiciary Committee Chairman Chuck Grassley, R-Iowa, and Sen. Lindsey Graham, R-S.C., had asked the Justice Department in January to investigate Steele based on evidence they say suggests he lied to the FBI about his contacts with the media (a violation of 18 USC 1001) -- or the FBI misrepresented Steele’s statements.

The lawmakers are now asking the FBI for an emergency review of their criminal referral so it can be made public, with limited redactions.

Steele already is under scrutiny over the unverified Trump dossier, which a House Intelligence Committee document released last Friday alleged was at the heart of the FBI and DOJ’s request for a surveillance warrant for a Trump associate.

The memo from Grassley and Graham, which is now public for the first time, provides new insight into Steele’s circle of contacts during that time. While heavily redacted, the memo states Steele said he received information that came from "a foreign sub-source who 'is in touch with (redacted), a contact of (redacted), a friend of the Clintons, who passed it to (redacted).”

Sens. Chuck Grassley and Lindsey Graham have made a criminal referral regarding ex-British spy Christopher Steele.

"It is troubling enough that the Clinton Campaign funded Mr. Steele's work, but that these Clinton associates were contemporaneously feeding Mr. Steele allegations raises additional concerns about his credibility," the senators wrote to Deputy Attorney General Rod Rosenstein, who oversees the Russia probe, and FBI Director Christopher Wray.

"...there is substantial evidence suggesting that Mr. Steele materially misled the FBI about a key aspect of his dossier efforts, one which bears on his credibility,” the senators wrote.

Entire sections of the memorandum were redacted by the FBI on the basis that it contained classified information, though a review of the document shows the FBI redacted references to media reporting, including a Washington Post story available on the Internet.

The senators are asking for a declassification review because much of the information was declassified by the president when the House Intelligence Committee memo was released Friday. The memo found the dossier was used to obtain a surveillance warrant on Trump campaign aide Carter Page -- and neither the FBI nor Justice Department told the national security court that it was financed by the DNC and Clinton campaign, and bureau contact with Steele was terminated over his contact with the media.

While the FBI fought the release of that memo, the senators also say the FBI’s claims “mischaracterize and misstate” the amount of classified information in the Steele referral. The senators are asking that the FBI and Justice Department “immediately review the classified referral in light of [Friday’s] declassification and provide the Committee with the declassified version by no later than February 6, 2018.”

In a heavily redacted Jan. 19 letter, Gregory A. Brower, assistant director for FBI congressional affairs, said the FBI "respects" the committee's commitment to transparency but the bureau "cannot and will not weaken its commitment" to protecting classified information because it is in the public domain.

"Public reporting about (redacted) does not affect the FBI's policy with respect to classification (redacted) nor does it diminish our obligations (redacted),” he wrote.

The House Intelligence Committee has long struggled with the FBI and Justice Department over access to Trump dossier and surveillance records. After August subpoenas were ignored, the committee threatened to hold Wray and Rosenstein in contempt of Congress before a deal was reached.

The memo detailing alleged surveillance abuse by the FBI and Justice Department was fully declassified after the committee followed a long-standing congressional rule which asks the president whether he objects to the record's release. In this case, the president exercised his powers as commander-in-chief to immediately declassify the document.