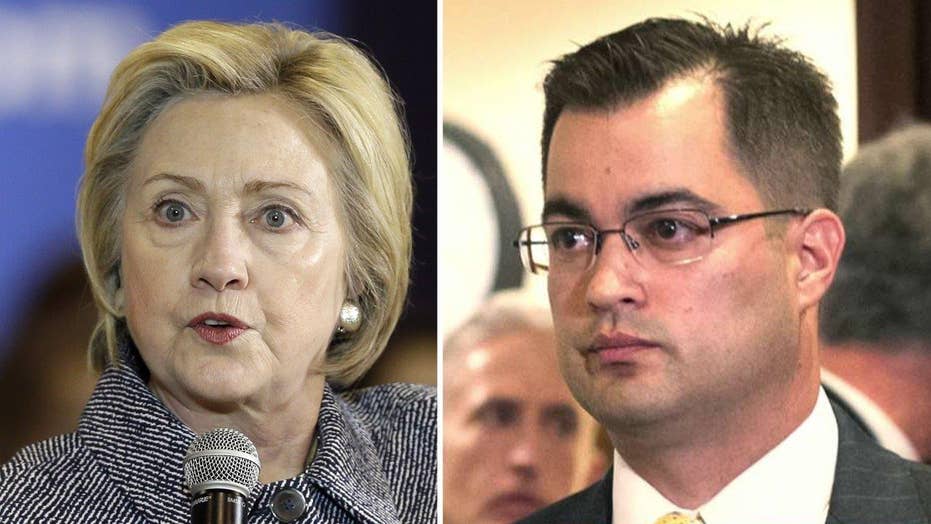 More than 100 days after he invoked his Fifth Amendment right to avoid testifying before the House committee investigating the Benghazi terrorist attack, a key Hillary Clinton aide is at the center of the separate and ongoing investigation by the FBI into Clinton’s use of a private unsecured server while she was secretary of state.

Pagliano is believed to be the only witness publicly identified during the politically charged hearings on Benghazi to invoke the Fifth Amendment.

He has not been charged with any crime, but the investigation continues into how Clinton used a private homebrew server which contained highly classified information while she was secretary of state.

As Fox News was first to report on Dec. 15, a review by the intelligence community reaffirmed that at least two emails were “top secret” when they hit Clinton’s private server. The State Department had challenged the classification.

At the core of the separate FBI investigation is whether highly classified information was "grossly mishandled" by Clinton and her aides.

Pagliano worked for the Clinton campaign team and was their trusted IT specialist before he joined the State Department in May 2009.

As first reported by The Washington Post, the Clintons paid Pagliano $5,000 for "computer services" prior to his joining the State Department, according to a financial disclosure form he filed in April 2009.

Yet, even after arriving at State in May 2009, Pagliano continued to be paid by the Clintons to maintain the non-secure homebrew server, which was located in a bathroom closet inside the Clinton's Chappaqua home.

As part of invoking his Fifth Amendment right, Pagliano is also invoking the so-called act-of-production privilege. Since 1984, according to a review by Fox News, the privilege has been used in 103 federal or state cases.

This assertion is tantamount to the defendant's testimony that the documents exist, are authentic and are in his possession.

The privilege has been invoked before by a Clinton associate. Webb Hubbell, Hillary Clinton's former law partner when she worked at the Rose Law Firm in Arkansas, argued for an "act-of-production privilege" during the federal investigation into the collapse of Madison Guaranty, a failed savings and loan. Hubbell followed Bill and Hillary Clinton into the White House to become an associate attorney general, the third-ranking member of the Justice Department. He was convicted in 1995 and served 18 months in federal prison for his role in the failure of that savings and loan which later became known as the "Whitewater scandal."

Pagliano initially invoked the Fifth Amendment in refusing to answer 19 pages of questions from the House Select Committee on Benghazi, which is investigating the attack that killed four Americans in September 2012. Killed in the attack were Ambassador Chris Stevens, State Department information officer Sean Smith, and former Navy SEALs Tyrone Woods and Glen Doherty.

Three months ago, Rep. Trey Gowdy, R-S.C., chairman of the committee, acknowledged that Pagliano may be called again. Fox News has confirmed no new subpoena has yet been issued by the committee for Pagliano. And there has been no subpoena issued by the Senate Judiciary Committee.

As for the ongoing and separate FBI investigation into Clinton's emails, no one is authorized to speak on the record but Fox News is told by two intelligence sources that the "Bureau (FBI) has a solid team on the case" and does not want to appear to be interfering with "the country's political process."

In addition to looking at the potential mishandling of classified material, investigators are focused on possible violations of U.S. Code 18, Section 1001 pertaining to “materially false” statements given either in writing, orally or through a third party. Each violation is subject to five years in prison.

It is unclear if Pagliano also had to sign a Non-Disclosure Agreement, or NDA, while working for the State Department which requires protection of highly classified information.

Clinton signed her NDA on Jan. 22, 2009, which states in part, "I have been advised that any breach of this Agreement may result in my termination of my access to SCI (Sensitive Compartmented Information) and removal from a position of special confidence.”

In the prosecution of former CIA Director David Petraeus for his role in wrongly providing highly classified information to his biographer and mistress Paula Broadwell, violations of Non-Disclosure Agreements were cited.

Fox News was told that “frustration” is mounting in the pace of the investigation into Clinton's emails.

Mark MacDougall, the attorney for Pagliano, had no comment to Fox News.